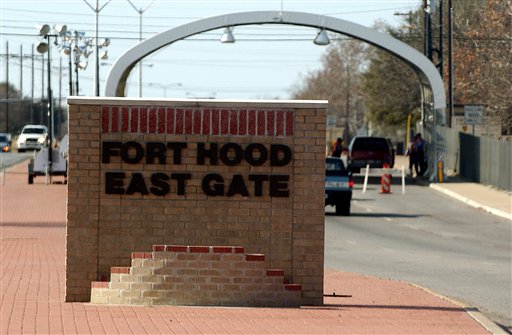 Updated: Friday November 5, 2009 at 11:30 a.m.  Thirteen people have been killed and 30 have been wounded in a mass shooting that occurred on the large army base Fort Hood, in Killeen, according to army spokesperson Lt. Gen. Bob Cone. Three suspects were taken into custody but two have subsequently been released. It has been confirmed that the gunmen was an enlisted man. Local police responded to the base and immediately began the search for the suspects. One female officer shot the gunman, who has now been identified as Maj. Nidal Malik Hasan, 39, a psychiatrist. ABC is reporting that he had previously served at the Walter Reed Army Medical Center. Reports have also come out that Hasan was facing a deployment to Afghanistan. Initial reports had the gunmen being killed by police, but at a press conference, Cone told the media that Hasan was wounded but was in stable condition and in custody. “The local police response forces were there relatively quickly,” Cone said in a statement to the press. Early Friday the local SWAT team raided Hasan’s apartment in a search for clues into why he would carry out this ruthless attack. Hasan’s first cousin, Nader Hasan, issued a statement late Thursday on behalf of their family, saying they are “shocked and saddened” by the shootings. Fort Hood, which is about 60 miles northeast of Austin and covers more than 339 square miles, is the home to more troops on United States soil than any other military base. There are roughly 47,000 troops at the base according to Fort Hood’s Web site. The shooting began at 1:30 p.m. when shots rang out at a personnel-processing office on the base. All thirteen of those killed were soldiers. “These are men and women who have made the selfless and courageous decision to risk, and at times give, their lives to protect the rest of us on a daily basis,” President Barack Obama said. “It’s difficult enough when we lose these brave Americans in battles overseas. It is horrifying that they should come under fire at an Army base on American soil.” The lockdown that was in place for nearly six hours was lifted, which allowed families to enter and leave the base. All offices in Fort Hood are on alert and have begun taking account of all personnel in hopes of identifying the victims. Both Gov. Rick Perry and U.S. Sen. Kay Bailey Hutchison have made statements about the incident on their Web sites and continue to monitor the situation closely. The army released a statement to the Associated Press saying the investigation has already begun as the army has asked the F.B.I. to look into the background of the suspects as well as discovering the motive for the mass shooting. This is the second shooting to occur at Fort Hood in the past months. There was an incident on Sept. 8 between two enlisted persons that ended with one of the individuals being killed.