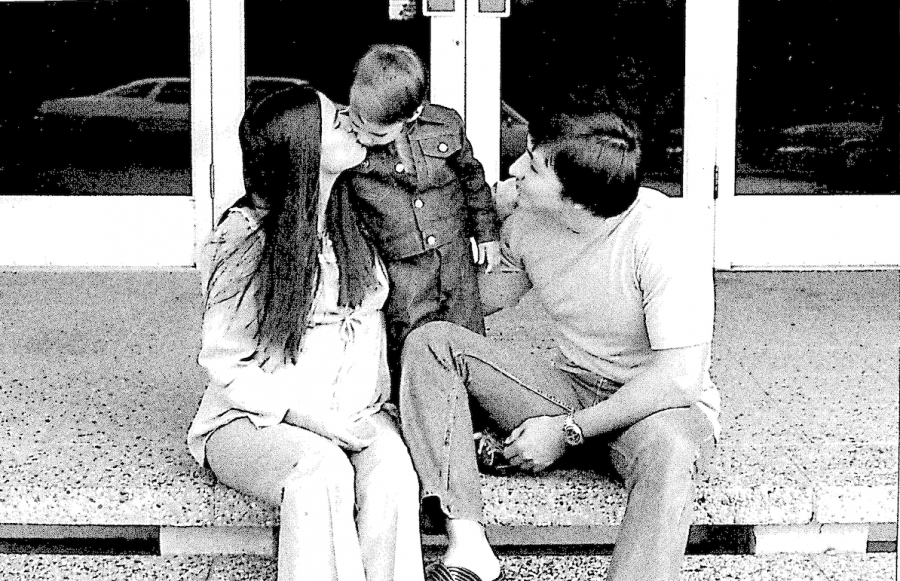 Roberto Treviño, his son Robert who was three years old at the time and wife Mary who was pregnant with their second child, Milinda.

In July 1964, Roberto Treviño and his family left Corpus Christi to visit colleges across the state so that Treviño could be the first in his family to attend college.

When the Treviños drove onto the Hilltop in their Chevy II Nova, a Holy Cross brother flagged them down. Charles, CSC, gave the Treviños an overview of St. Edward’s over lunch in attempt to convince the family to choose the university. Charles let the family know Treviño could live in Holy Cross Hall where he was the head resident, what is now known as the Residence Director.

Treviño’s parents were skeptical as they had never been to college. In the end, they agreed as long as Treviño stayed closely under Charles’ wing. During move in, Treviño was placed across the hall from Charles’ in room 214, which is now the Hilltop Views office.

Treviño’s beginnings on the Hilltop started off a little rocky after meeting his freshman year roommate — a blonde, blue-eyed New Yorker that had never seen a Mexican before. The two immediately agreed their set up was not going to work and went to Charles’ for a room switch.

Charles was unmoving, forcing the two to work past their differences. A year later, Treviño found himself living with the same roommate for a second year as the two became close friends, playing on the baseball team together and visiting each other’s hometowns.

As the Vietnam War escalated, Marine Corps recruiters came to St. Edward’s looking for officer candidates to join after getting their degree. Treviño agreed and spent the summers after his freshman and junior years in bootcamp.

In his sophomore year, Treviño was pushed to become an RA the next year since there weren’t many RAs like him.

“When I got here freshman year, there were probably a half dozen Mexican kids,” Treviño said. “All the other kids were white, upper-middle class, upper income from private schools. And half a dozen others were from South Texas.”

“I began to see a lot of kids who did not look like me who became involved in this movement for equality and for civil rights,” Treviño said. “It was very encouraging because I didn’t mind going to Vietnam if this is what it is about.”

The Marine Corps pushed involvement, and come Treviño’s junior year, he became involved in several student organizations, while he continued varsity baseball and being an RA for Holy Cross Hall.

Campus life kept Treviño awake; on campus activities was the anchor of the community.

“I think a lot of it had to do with the student life because we played ball together. It brought a lot of kids who would not ordinarily hang out together,” Treviño said. “When you got put into a dorm, it was a real mixed bag. You got to know people from Roswell, New Mexico, from Chicago from Delaware and they got to know kids from Laredo and El Paso.”

Treviño said women’s arrival to the Hilltop in 1966 made his experience as a RA interesting to say the least. He recalls an unforgettable call from a sister from then all-female East and Teresa halls.

“She called me up and she said, ‘Bob, do you know what your boys are doing?’ And I said, ‘No ma’am what? They’re probably doing the card-rating thing.’ ‘No it’s worse than that, Bob,’” Treviño said. “And I got out of my office and went out to see and they were mooning the girls. They were laughing and then the girls started rating.”

Treviño went on to become a captain for the Marines at 23. Even after his undergraduate years, Treviño was reminded of all he gained from St. Edward’s — a thought especially prevalent during a bootcamp inspection when a general looked at his name tag.

“’Treviño, what kind of name is that, candidate? ‘It’s a Mexican name, sir’ and he says ‘Wrong!’ and he started chewing me out big time,” Treviño said. “‘Treviño is an American name. It’s just as American as Williams as Johnson as Phung; we are all Americans here. There is no black, there is no brown, there is no red. Everybody is Marine Corps green and don’t you ever freaking forget it.’ I swear I came out of that inspection and I felt like I was 10 feet tall. That was the first time that I really felt like an American. I always felt different until then. And then I brought that back to St. Ed’s.”

Treviño met his wife the day after returning from Vietnam on February 13, 1970. The two were married exactly four months later, and they had their first child, Robert, on April 18, 1971.

Once Treviño was discharged from the Marine Corps in March 1972, he began working at St. Edward’s as a head resident of Doyle and Andre halls with his wife and son. That summer, he began graduate studies at the University of Texas at Austin. While working as a head resident, Trevino and his wife had their second child, Milinda.

Influenced by his teachers, Treviño went into education as a bilingual teacher and taught in minority schools. He ended up becoming an administrator and eventually obtained his doctorate. After retiring from teaching at the University of North Texas in 2005, Treviño trained principals and superintendents.

A lot changed in 50 years. In 1968, Hilltop Views was known as “The Hilltopper,” men were the predominant population on campus and Holy Cross Hall was a residence hall. Roberto Treviño shows that, while a lot has changed, much has also stayed the same.

“I don’t care whether people are going into journalism or going into business or education, you’re going to make this world a better place,” Treviño said. “And I was telling [University President] George [E. Martin], ‘I hope you keep that up, man. Keep your eye on the prize.’”