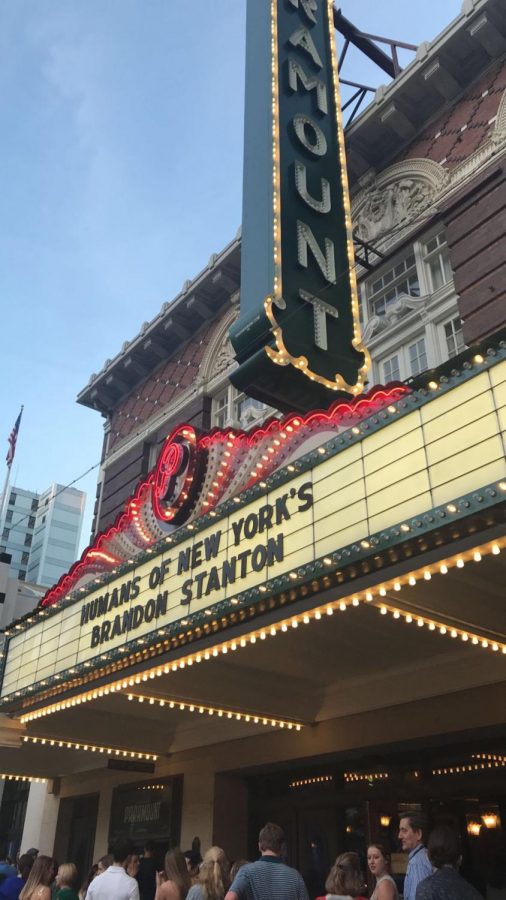 At a time when technological advancement and a cultural zeitgeist coalesced, a man with a simple idea emerged. Several years and thousands of stories later, this man, Brandon Stanton, is regarded as a trailblazer in the world of photojournalism, a worldwide internet phenomenon and one of today’s most influential storytellers.

Created on the cusp of a technological revolution, Stanton utilized the burgeoning eminence of social media and an interest-driven passion to create “Humans of New York.”

“Humans of New York” is a photo blog of portraits and interviews collected on the streets of New York City; however, since its commencement, it has surpassed city and even national borders.

The road to world renowned fame and a social media following of over 25 million was not an easy one. In fact, many struggles preceded it.

In early April, Stanton held a talk at the Austin Paramount Theatre in which he candidly shared his personal story, a story much like one from the “Humans of New York” blog itself.

Just seven years ago, things were not at all smooth for Stanton. Paralyzed by the thought of feeling as if he had to do something substantial, which to him at the time translated to something lucrative, his inner creative ambition stagnated.

As a result, Stanton found himself working a job completely opposite of his desires: bond trading in Chicago. Having flunked out of the University of Georgia and graduating only after a second attempt, the question of his life’s purpose lingered.

“I wanted to do something creative and meaningful,” Stanton said the sold out theater.

For two years, he threw all of his time and energy into an endeavor that would ultimately prove futile.

“I think it was mainly about clinging so tightly onto that sense of importance,” Stanton said. “The resource that we have a hard time seeing is this invisible feeling of importance and prestige.”

Stanton gained valuable perspective from how he dealt with past strife.

“Your identity and your sense of self worth is what you pay attention to. Period,” Stanton said.

Investing attention in misguided goals left Stanton feeling lost, and it took a significant downfall for realization to strike.

“I got fired, and that was surprisingly a good day,” Stanton said.

He recalls taking a walk that day and pondering his life decisions.

“At one point, I just threw in the towel and decided that I’m gonna stop trying to think about what it is that I’m supposed to do in life and start focusing on the things I’m supposed to do tomorrow,” Stanton said. “I made a decision that the rest of ‘Humans of New York’ was based on.”

Stanton wanted to dedicate his time and effort to doing what he loved all day long, which at that point, was photography. These initial steps were momentous for the future.

Stanton decided to move to New York City the second day he saw it.

“I remember coming out of the Lincoln Tunnel into rush hour, and I looked down and couldn’t even see the sidewalk. It was just covered in people. All different kinds of people,” Stanton said. “I thought that if this is the type of photography I want to do, this is the place to do it.”

Stanton has been photographing for seven years, and “Humans of New York” is seven years old. With no formal training whatsoever, Stanton’s level of success is a remarkable feat.

“I didn’t decide to photograph because I thought that it was my edge, my skill, my best chance of gaining an audience, getting famous or having money,” Stanton said. “It was because it was the thing that I loved to do the most.”

Stanton’s key to success is not only passion, but a sense of courage; he explained how approaching photo subjects is often the most difficult part of the process.

“I knew I wouldn’t become the best photographer in the world, so I thought maybe I had a shot at becoming the best in the world at stopping random people on the street,” Stanton said.

“I had gotten over the fear of interacting with a stranger,” Stanton added. “Somebody with all of the experience in the world who was unable to get over that fear would not have been able to do it.

Later in the talk, Stanton showed the very first picture of people he ever took. The images featured two young boys on the subway looking up with a similar expression of wonder, “a beautiful expression of childhood.”

This photo was later displayed alongside one of his more recent photos– a portrait of former U.S. President Barack Obama. A wave of admiration reverberated among the space, and somehow, the timeline of personal growth between the two photos was made evident.

Throughout the night, Stanton encouraged the prospect of acting on underdeveloped concepts.

“If I had waited for the idea of ‘Humans of New York,’ I would have never begun ‘Humans of New York,’” Stanton said. “You cannot wait for the perfect idea before you commit yourself to doing the things that you love. You will never get to the moment where your idea is so perfect it will not fail.”

“This wasn’t my initial idea. It wasn’t this flash of brilliant inspiration that came to me,” Stanton said. “I made hundreds of small evolutions along the way.”

The advent of social media and the ability to attract a large-scale audience aligned perfectly for Stanton. A project like this would not have been possible 15 years ago. Ultimately, the power of the internet combined with the value of storytelling has extended its reach on a monumental scale, nurturing the universal desire of basic human connection.

“The common denominator for people who are interested in this project is empathy,” Stanton said.