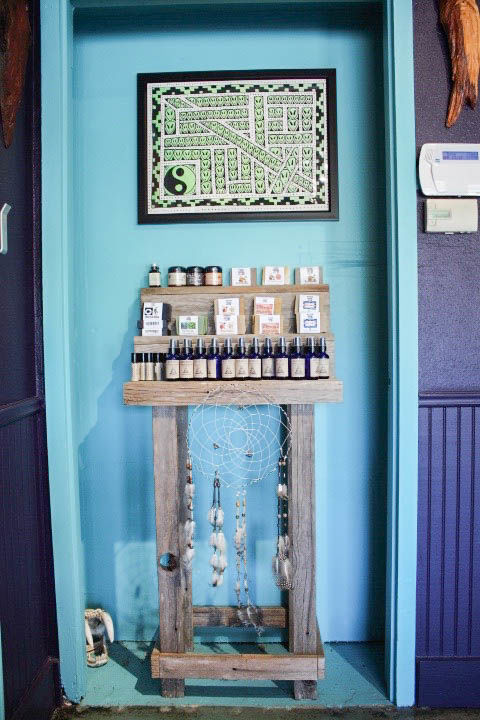 Driving down South Congress towards downtown offers Austinites and tourists alike plenty of shops and restaurants to explore. However, right before reaching the tourist- filled portion of SoCo, there is a mysterious store by the name of Cosmic Cowboy tucked in between the corner of South Congress and College Ave.

Upon entering, you find out it’s a combination of a smoke shop and boutique with a vibe that can closely be compared to that of a tattoo parlor. Here to gladly welcome you as soon as you walk in on most days is one of the store’s owners, St. Edward’s alumnus Chris Gilbert ‘11.

“I love that we made our shop nondescript on the outside. You drive by, it could be a plant store, it could be a jewelry store, it could be a bar, no idea. I like the design outside because it is kind of like a New Mexico-style home…” Gilbert told Hilltop Views.“I like the idea of you walking up. it looks very plain, very non- descript, kind of cute, whatever. But then you walk in and it’s all bright and shiny — there’s tons of things.”

For Gilbert, who graduated from SEU in 2011 with a Bachelor’s Degree in Business Administration, the idea of owning a smoke shop was nothing more than a cool high school ambition. He thought the volume of smoke shops around Austin was already saturated and that there was no room for yet an- other.

“We spent about a year trying to put together a business plan for an art gallery and realized it’s very difficult to prove how you’re going to make money it in by basically saying ‘trust us, we know what good art is.’” Gilbert said.“It was a little harder to let people’s heads wrap around how they’re going to get their money back with an art gallery…”

Having first worked in a smoke shop when he was 19 years old, Gilbert had the right people tell him that the smoke shop industry was flourishing in Austin with room to grow. Knowing that, he, along with his brother Brian, realized that opening a smoke shop was much more viable than their original art gallery idea.

Where an art gallery faults in primarily only having high-priced art to sell, smoke shops like Cosmic Cowboy thrive in the selling of everyday items for people in and around the culture.

While the shop sells art and high-quality glass, their bread and butter comes from the cheaper items, such as rolling papers, e-cigarette products and affordable glass pipes.

The natural sustainability that comes from selling cheaper items at a higher rate, mixed with 13 years of combined smoke shop experience, helped the brothers realize that it was the most logical and fun business venture to explore.

“I was trying to build something and I didn’t know what yet…I figured the best machine that I could build out of the pieces and parts I had was a smoke shop and I felt I could make that machine run the best,” Gilbert proudly said.

Gilbert’s business-oriented mind in partnership with Brian’s background from the School of Visual Arts, along with their experiences, came together to birth the idea that has come to be Cosmic Cowboy.

Teir combined experience helped them develop an understanding of Austin’s college- town population and how it goes hand-in- hand with the smoke shop business.

Of all the smoke shops in this city, dating back to Austin’s first smoke shop, Oat Willie’s, none had done it “right” in Chris’ eyes until BC Smoke Shop found its way to Austin. BC’s commitment to selling American- made glass and Chris’s Austin residence since 1998 helped build the foundation for Cosmic Cowboy.

“I was really enamored with the idea of doing something that was more Texas. A lot of the nicer shops, they’re very hip-hop centric. They’re very hippie, festival centric, which is great, I love all those things, but this is Austin I thought we needed to represent the hill country in a better light,” Gilbert said. “I wanted to do something with a little Texas theme, but a little psychedelic, [hence] Cos- mic Cowboy.”

The name itself has multiple ties to Austin. Different artists such as Willie Nelson were known as Cosmic Cowboys, with Michael Martin Murphey even having a song with the same title.

“I thought it was too perfect. I couldn’t be- lieve it was available, so I grabbed the name as quick as I could and grabbed the LLC,” Gilbert said. “Like I said, all the tools and pieces kind of just started to fall together and next thing I knew, I had a spot on Congress.”

Owning a smoke shop in Austin is already good as-is, but owning one on South Congress goes a long way for him and his customers. The shop offers a five percent discount on certain items to those who work along South Congress, as well as those who provide a St. Edward’s ID.

Gilbert says,“It’s through friends and family, and now the support of the community that we can do what we do, so I’m very much appreciative for all of that… and kind of lucking out with being able to have my dream job.”