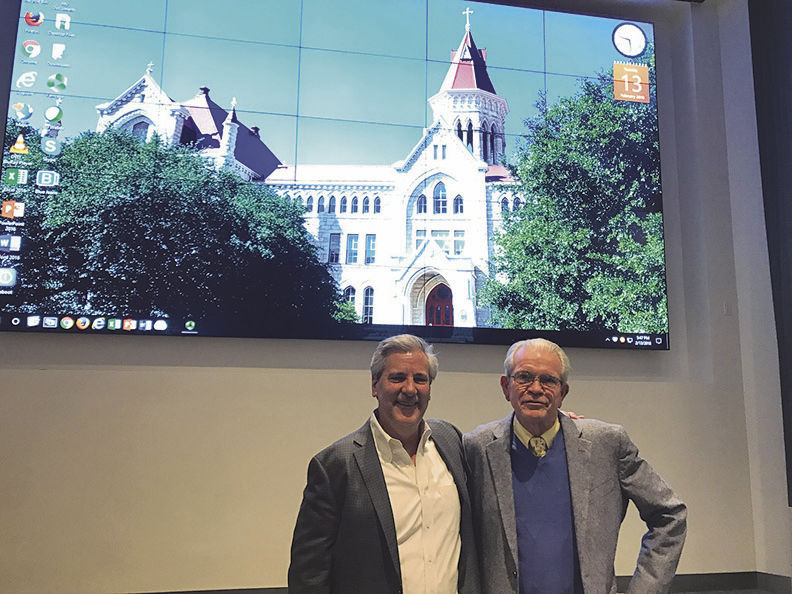 St. Edward’s University Distinguished Alumnus and attorney Steve Shadowen visited campus to speak about a specific case of his that has been tried and challenged in the U.S. Supreme Court.

Shadowen opened his Feb. 13 lecture in Jones Auditorium with a light remark,“Lawyers are never at a loss for words — we get paid by the words, so thank you for this.”

For the past decade, his firm has focused on finding legal breathing room between domestic statutes and international laws regarding cross-border shootings by federal agents.

His firm’s notable case revolves around Sergio Hernández, a slain Mexican teenager who was shot on Mexican territory by a U.S. Border Patrol agent 35 yards away in El Paso, Texas.

“This is the tip of the spear in the international world right now,” Shadowen said.“Our case will be the first in the country, and one of the first in the world, to address the issue [of sovereign immunity specifics].”

For the past decade, his firm has focused on finding legal breathing room between domestic statutes and international laws regarding cross-border shootings by federal agents.

His firm’s notable case revolves around Sergio Hernández, a slain Mexican teenager who was shot on Mexican territory by a U.S. Border Patrol agent 35 yards away in El Paso, Texas.

A video recording of the 2010 incident went viral and highlighted unconstitutional brutality. Shadowen also mentioned this case ties into an older argument of rocks versus bullets that escalated to policy changes due to Mexican nationals throwing rocks at U.S. Border Patrol agents.

“This policy justified the border patrol agents in drawing their weapons and shooting to kill,” Shadowen said. “This is what we’re seeing with these lawsuits.”

Now the big question is whether or not the U.S. Border Patrol agent who shot the 15-year-old Mexican liable for damages.

Garnering media attention, the high-profile case has moved from Texas to Washington, D.C. Cleared of wrongdoing by the FBI, the U.S. Border Patrol agent in question, Jesus Mesa, was also granted immunity from lawsuits from the 5th Circuit Court of Appeals.

However, in February of 2017, the Supreme Court found the lower court’s rationale to be a mistake. This ruling is providing momentum for Shadowen and his legal partner Robert “Bob” Hilliard in arguing Hernández’s Fourth and Fifth Amendment rights were violated.

At the time, Hilliard was quoted in saying there should not be “a unique no-man’s land — a law-free zone in which U.S. agents can kill innocent civilians with impunity,” per John Burnett and Merrit Kennedy of NPR.

Justices are concerned this case will lead to a high-stakes precedent of holding domestic law enforcement agents accountable for actions on foreign soil.

“Terrorists, it’s all about terrorists,” Shadowen said, recalling how Justices exaggeratedly shifted conversation to questions on if the parameters of this case would allow Jihad in Afghanistan potential to sue the general conducting military operations and that the federal judiciary could then decide the outcome.

“These decisions about the Border Patrol are going to go down in history… They are the next Japanese internment cases,” Shadowen said. “It happens over and over again, where U.S. institutions and levers of government get caught up in a historical moment, overreacting to something truly terrible.”

Trying to push the law forward, Shadowen and Hilliard have a connection that extends far before their time in courthouses. In fact, the two were former roommates in Doyle Hall when the building used to be a dorm hall, as well as teammates on the St. Edward’s tennis team in the late 1970s. Graduating in 1980, they are now the founding attorneys of Hilliard & Shadowen LLP, specializing in economic justice and civil rights in Texas and Pennsylvania.

“One of the ways we prepared [for litigation]… put a lot of strain on the friendship because we sat in a conference room in Washington for 12 days staring at each other; that was brutal. At one point he said, ‘If you ask me that question again, I’m gonna strangle you.’” Shadowen jokingly said of Hilliard. “So one of the ways we did it was just repetition over and over again. Of course, there are a lot of civil rights organizations in the country who had a lot of interest in the case, so they would put on mock trials.”

Shadowen currently serves as secretary for the Board of Trustees at St. Edward’s and strongly believes his liberal arts education and the university’s focus on passion, critical thinking and writing helped him thrive as a legal writer.

When asked if there is anything specific from his time at St. Edward’s that has carried him through his law and life endeavors, Shadowen pointed to recently-retired philosophy professor William “Bill” Zanardi, who was in attendance for the lecture. Shadowen referred to Zanardi as his mentor and favorite professor who inspired him “to do something in the world.”