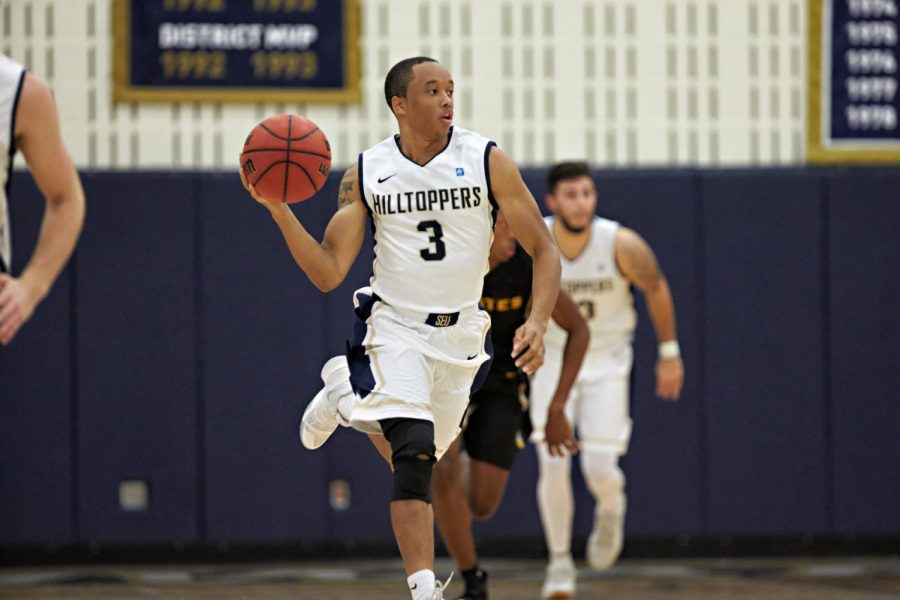 SEU men’s basketball rallied back but ultimately fell short 88-94 against Dallas Baptist University on Saturday in the RCC. Junior guard Landon Goesling led the way for SEU with 32 points, providing plenty clutch shots throughout the game along the way.

“It was more Dallas Baptist, I mean there’s a reason why they’re 21-5, and tied for first place in our league. They have excellent individual players that can make plays. Guys like Chandler Jacobs and Boy Van Vliet and Carter Brown – they’re hard to guard off the dribble,” head coach Andre Cook said.

After the first half, DBU had out-shot SEU, 64.3% to 51.6% from the field. Aside from the better shooting from DBU, they constantly out-performed SEU physically, yet they were only down 43-51 headed into halftime.

It was a different story as soon as the second half began with SEU asserting their physicality and refusal to be pushed around– but it was never quite enough.

Every time SEU would pull within two points of DBU, the Patriots would respond with offense and score, primarily from behind the arc.

The game stayed close for the entire second half and with 2:56 left in the game, down 81-83, it seemed that SEU was going to complete the comeback by forcing a backcourt violation to the pleasure of the home crowd. However, SEU could not capitalize on the possession.

DBU would end up jumping to a 94-86 lead with 11 seconds left with a comeback being near impossible for SEU at that point, but to the team, that didn’t matter – it was a sign of resilience.

“We believe anything could happen in a game. The game went up until the final buzzer goes off and we have guys that believe in each other… Believing that we can always win,” senior guard Sean Watkins said.

Moving forward, SEU looks to end their losing streak and finish on a high note heading into the Heartland Conference Tournament.

“If we could string these couple wins together before the tournament, get some momentum headed into Tulsa, we’ll be in good shape and feeling good about ourselves,” Watkins said.

Before finishing the regular season on Saturday against Lubbock Christian, they will look for a win against Texas A&M – International in the RCC on Feb. 24 at 3 p.m., both games occurring during homecoming week.