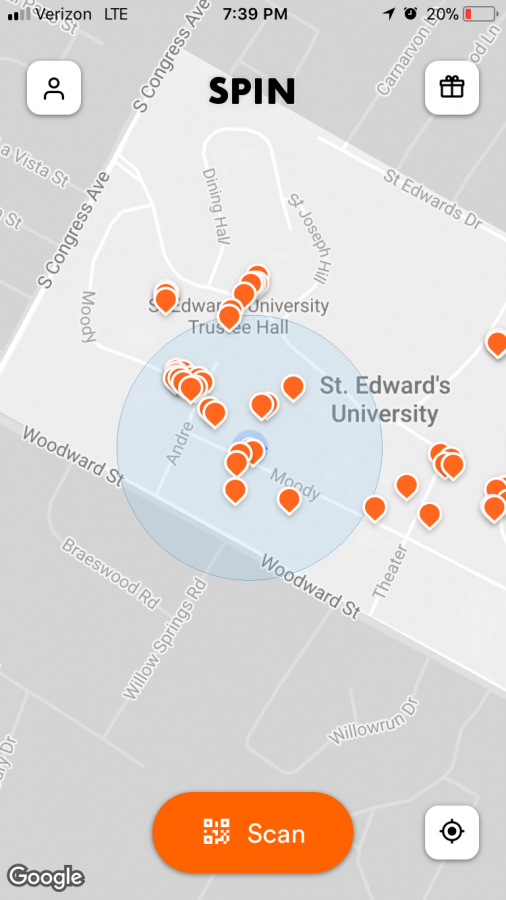 Wondering why orange bikes are sweeping the campus? In an effort towards fulfilling a mobility challenge, the university has brought bikesharing to the hilltop.

The free pilot program launched at the start of the semester with a few dozen bikes and now has more than 130 bicycles dispensed around campus.

The mobility challenge was enacted in 2014 following research by the Austin Chamber of Commerce showed that traffic would become 78 percent worse in years to come. Thus, the chamber decided to create affordable mobility options to decrease congestion in traffic.

Spin, based in San Francisco, is the provider for the stationless bikes and was first presented in Austin during SXSW last year by founders Euwyn Poon and Zaizhuang Cheng. The company, crafted of engineers, lawyers and former public policy makers for ridesharing services like Lyft and Uber, have established their bike-sharing services at campuses like Duke University and University of Washington.

Aaron Marhue manages city operations and logistics for Spin’s Austin area. Marhue said the end goal for the pilot program is to “make it easier for students to get around and show the city that this is a good way to link campuses.”

St. Edward’s is the only campus in Austin with Spin, because the university was “more excited about starting things right away,” Marhue said.

To go for a ride–which lasts a half hour– download the Spin app and scan the code found in the back of the bike. Students using their university’s email get half off the $1 ride.

Rushing to get to class, junior Miguel Escoto said that he used a bike that had been left in the parking garage and “zoomed over” to Trustee Hall.

“They’re good for the environment, good for traffic and a good way to do exercise,” Escoto said. “It’s inculcating into the minds of students that… you don’t need cars to move around.”

“The cool thing is that they will be able to show us the data like where the most rides are taking place,” said Director of Campus Safety Burnotes. The data shows where rides are taken to and from. With the tracking system, the campus can figure out where bikes should be placed or if certain areas are not bike friendly. The system will also allow Spin to locate bikes left outside of operational zone and replace stolen or damaged bikes.

Burnotes said a rack will likely be placed in the parking garage since it’s a common place for students to leave behind bikes.

People who temporarily abandon their bikes might encounter a program set out to relieve congestion from bike racks across campus.

A good indicator of a successful pilot is high usage of the bikes through the year long program.

“I’m wondering how many people who have never ridden a bike will ride one,” said Burnotes.