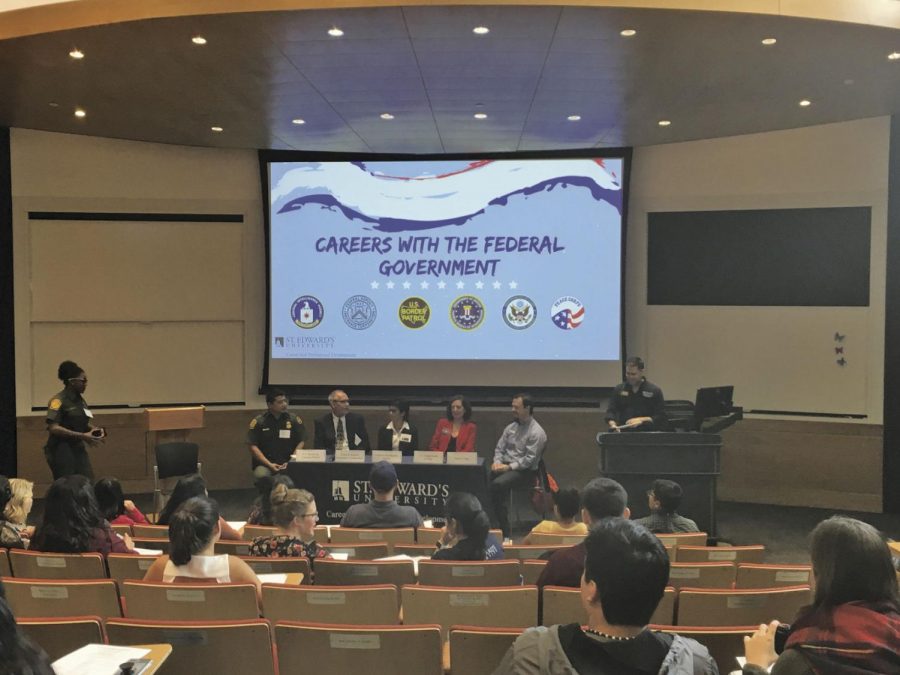 Panelists included agents from the CIA and the Peace Corps.

Representatives from five federal agencies spoke to students at the university about careers in the federal government on Sept. 29. Civil servants from the US Border and Customs Patrol, the Department of State, the Federal Deposit Insurance Corporation (FDIC), the Peace Corps and the Central Intelligence Agency all presented students with a short description of their respective agencies followed by an explanation of how to apply for jobs, internships, fellowships, and more.

The event aimed to inform students about specific careers in the federal government and covered how to apply, what characteristics make for good applicants and how each department provides service to the country.

George Fritz, the FDIC representative, spoke about the nature of his job as a resolutions and closings manager.

“Our job,” Fritz said, “is to protect public confidence in the banking system.”

Fritz works with banks that are being shut down due to unlawful practices or other failings, a job he described as “pretty challenging and very, very interesting.”

While some students in attendance simply sought new information, others came with specific goals in mind.

In addition to careers, a few of the representatives spoke about internships available to students. The CIA offers internships for freshmen and sophomores around the country, which provides a way for people to serve their country outside the military, according to the CIA representative.

National service was a common theme throughout the seminar. The DOS representative said that she “joined the State Department to see the world, I stayed because it is a public service and I found it to be extraordinarily intellectually stimulating.”

The appeal of these careers are numerous: for example, the starting annual salary for the FDIC entry-level ranges from $53,290 to $72,750 according to the FDIC website. Nevertheless, these agencies are having a difficult time convincing students to invest in a federal career.

A recent survey said that six percent of students considered working for the government to be their “ideal” job. Similarly, about nine percent of the federal workforce is composed of people under 30, despite the fact that that demographic makes up almost 24 percent of the national workforce.

The DOS representative said that although the results of seminars like this one were “difficult to measure,” they were most likely “quite successful.” The Partnership for Public Service, a nonprofit, nonpartisan think tank, advises that the federal government do exactly what these representatives were doing at the university: meeting with students to engage them with real career opportunities and guiding them through the often daunting application process.