Just like any other American, athletes can protest as well 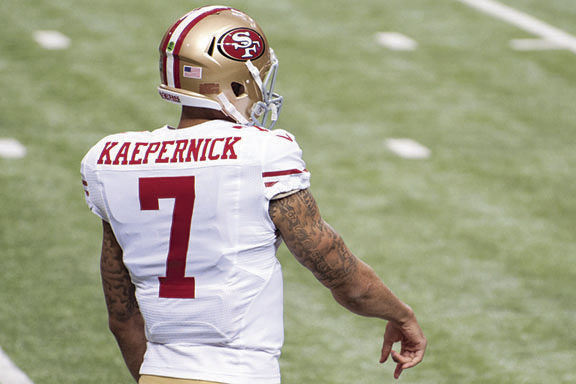 In a time where the line between political and sports commentary has become blurry, sports fans are treated with a trifecta that happens every October. The MLB playoffs are being played during the entire month, the NFL is entering the heat of their season and the NBA just started their regular season schedule. With sports dominating television at this moment, sports lovers now have to accept the fact that nationally televised sporting events have once again become a stage of social justice demonstrations.

According to The Guardian, that year alone, police killed at least 1,093 people. While African Americans make up roughly 12 percent of the country’s population, they accounted for almost a quarter of those killed by police.

It is a pressing issue because of all NFL players, 70 percent are black. However, its fans are roughly 83 percent white and 64 percent male, according to The Real GM.

Many white Americans were outraged at Kaepernick’s protest and decided to boycott the NFL. In answer to that, team owners such as Dallas Cowboys’ owner, Jerry Jones, threatened players that joined in kneeling with suspension, “or worse.” It is evident that some owners are attempting to silence or oppress these NFL players, thus is the tradition of silencing and abusing African Americans in this society.

In September, President Donald Trump sent out multiple tweets, in which he advocated that NFL players should either be fired or suspended if they fail to stand up for the national anthem.

“The issue of kneeling has nothing to do with race,” Trump said in a tweet following his initial comments. “It is about respect for our Country, Flag and National Anthem. NFL must respect this!”

Sports arenas have always been a place of great social movements. Think Muhammad Ali, who protested the Vietnam War and was banned from boxing. Or Tommie Smith and John Carlos, the gold and bronze track medalists who were stripped of their medals after raising their fists as the national anthem played during the Summer Olympics in Mexico City in 1968. Kaepernick lies as yet another activist that lost his job for the movement. But why?

Why is it that a black person has to be a superstar athlete or have exceptional talent to enjoy only some of the perks that many white people could take for granted?

Gregg Poppovich, head coach of the San Antonio Spurs,put it best when he said “We still have no clue of what being born white means,” in an interview last month.

It is really telling when there are people who are not bothered by videos of police shooting unarmed black people, but are bothered when someone protests by silently taking a knee during a national anthem. Now more than ever, it is important for athletes to let their voices be heard to fight against the injustices minorities face in the United States today.