Senate being frugal with remaining SGA funds for student organizations 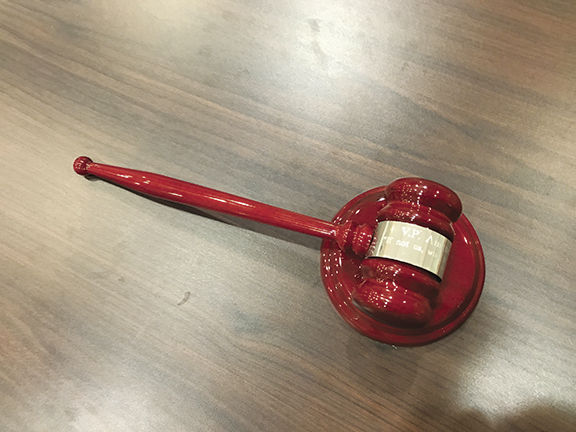 The Student Government Association has $1,197.85 remaining for student organizations to utilize this semester. Having granted 88 percent of the semester’s $10,000 budget, SGA must now carefully consider requests made during the next seven weeks.

Of the four requests heard before the senate Oct. 19, one was approved, while the others were either amended, tabled or denied.

The funding request that received the most criticism was a $400 travel request from AIESEC, for two reasons.

First, the travel expenses would only help with costs for two organization members to attend a conference in Hazlet, New Jersey. Second, the organization previously received $900 from SGA in July and another $300 in September for similar leadership conferences.

AIESEC is a non-profit global engagement organization which helps students find international volunteer and internship opportunities. Founded four years ago, the organization has the support of the Global Engagement Office, and has allowed for students to travel to China, Brazil and Peru.

“Per the timeline, there’s five [conferences] a year,” AIESEC President Alex Gutiérrez said. “I’m always, as president, required to go to every single conference,” echoing that the Oct. 27 conference was especially important because it will serve as a “transfer of power” between him and the president-elect.

Gutiérrez said that the $400 won’t cover the entire cost of the flights, and that the organization’s “focus can’t be to fundraise,” as it needs to focus on providing travel opportunities for St. Edward’s students.

However, AIESEC is trying to fundraise by working with The Economist publication to provide a 12-month deal for $12. For every 10 people who join, AIESEC gains $250.

He told SGA members, “In terms of where your money is going, it’s going to a potential student having a leadership experience going abroad.”

“I think you should be proud of the work you’ve done as a student organization, but I was there in July when it was a smaller senate meeting, and I was hesitant to give the organization $900,” Sen. Derek Hunter said. “With that being said, I don’t think it’s fair to the other organizations to grant your organization up to $1,200, and I don’t feel comfortable giving AIESEC any more money.”

Although student organizations are allowed to request a maximum of $2,000 per semester, senators voiced they were not convinced these travel plans were necessary.

Sen. Sofia Ojeda motioned to deny the request, and all other senators agreed.

The amended request belonged to the Psych Society, who planned to partner with It’s On Us to host a community event, where the money would go towards purchasing food, refreshments and prize gift cards.

Originally requesting $381, the Psych Society was allowed $212, omitting money that would have been used to purchase organization T-shirts.

Sen. Miguel Escoto suggested this change, asking the organization to decide on the spot at the meeting.

“In the spirit of trying to allocate funds to a variety of organizations, I was wondering what you would think of removing the whole T-shirt endeavor from this request?,” suggesting for the organization members to purchase shirts on their own dime. “What do you think? Is that fair?”

Junior Haley Rhodes was in attendance representing the Psych Society, and agreed to compromise with SGA’s unanimous allotment.

CFO Cameron reminded the senate that the numbers reflected in organization’s accounts are estimates, due to starting amount uncertainties from when funding responsibilities shifted from the no longer existing Recognized Organizations Council (ROC) to SGA.

“Anytime you see the amount in the account, you have to remember that that’s more or less a rough estimate of what it is, that’s not exactly what it is,” Galvan said.

The tabled request went to Forensic Association Committed to Truth (FACT), who requested $910 for a Mystery Murder Dinner.

But the mysteries surrounding details of the event prevented SGA from finalizing a decision on whether or not to contribute, especially given the large sum of money being requested.

FACT’s event is planned for Nov. 12, but the organization was not able to provide SGA with pricing details for food from Cabo Bob’s, while multiple senators questioned marketing tactics.

Therefore, Sen. Josue Damian-Martinez motioned that the request be tabled until Oct. 26.

“I think we should table this until we can see the amount [that is needed],” Damien-Martinez said. “Realistically, I don’t know if we’re going to be able to give all this money… Organizations need the money too, but we can reduce the amount.”

The approved amount of $75.15 was designated to the newly-formed Electric Lady Coalition, which seeks to provide insight on multiple career fields and focus on philanthropy. The  group was requesting funds so they could buy dinner for a meeting to raise student interest.

Without any questions regarding line items, and with the Electric Lady Coalition’s word of a future hot cocoa sale and collection of membership dues next semester, SGA approved the amount.

Galvan authored the legislation and Sen. Avi Laudon sponsored it.

The bill states that upon the senate’s decision to allocate funds, organizations will have 30 calendar days to use the allocated funds and turn in a receipt for reimbursement to Student Life Office Specialist or it shall be recycled back into the SGA funding request budget.

This act also emphasizes that organizations must submit a request within 14 days of a specific event date in order for the funding request to be considered.

Lastly, the act initiates an accountability measure for the CFO to ensure there is a paper trial that can be tracked with organizations by ensuring senators and organization members are included in email chains with clear deadlines and instructions explained.

To conclude the meeting, SGA Advisor Carey Mays encouraged senators to focus on legislation that will help solve problems on campus.