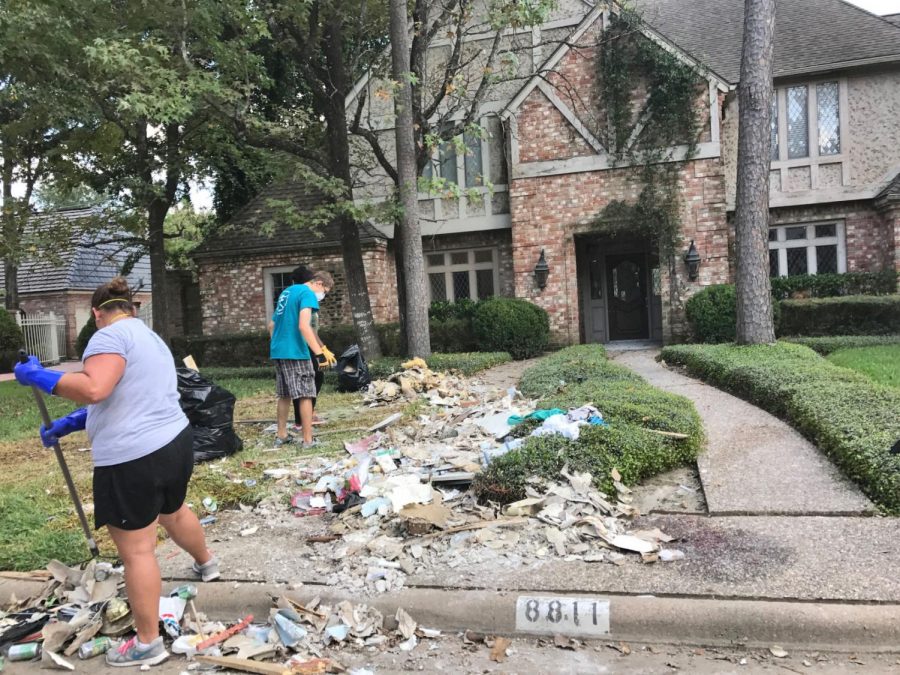 Campus Ministry volunteers rake and shovel debris onto the street from a water-damaged home in Spring, Texas, on Sept. 16.

The floodwaters of Hurricane Harvey may have receded along the Gulf Coast of Texas, but volunteers are still needed as cities enter early stages of rebuilding.

Floods did not discriminate between the rich and the poor. And destruction is so extensive that Gov. Greg Abbott has repeatedly expanded his state disaster proclamation, which “covers about 42 percent of the state’s population,” per the Texas Tribune.

A group of nine students took part in Harvey relief efforts with Campus Ministry during a day trip to Houston on Sept. 16 with Liza Manjarrez, Associate Director of Campus Ministry.

During the trip, students worked with Catholic Charities, a nationwide nonprofit with a Houston branch, to distribute non-perishable food, toiletries and clothes to those affected by Harvey. Students also removed flood debris from a homeowner’s lawn.

LaRita Pryor, 63, was going through boxes looking for clothes, but not for herself — rather for teenagers in her neighborhood. The Tribune also reports there are 480,500 people, one-fifth of Houston’s population, living below the poverty line.

“They have a heart for an old, black homeless woman,” Pryor said. “Maui buys me a dollar sandwich and some french fries. I pray for these kids all the time.”

Working at a nearby Burger King, a few of these Hispanic students often go out of their way to bring her a bite to eat. Over time, she has gotten to know these teenagers personally, and thinks of them as the “grandchildren” she never had.

In return for their generosity, she took note of their favorite colors, then eagerly tried to find a shirt for them in the respective colors. She made her way through the donation station merrily with a heavy bag full of bibles for these students, often saying “God bless you” to volunteers.

“During the storm, I was at [a shelter], and I watched all the water wash everything away,” Pryor said.

Since then, the church community has helped repair his 55,000-square-foot home for the past three weeks.

“You cannot believe how distressing it was to see all of our belongings eight feet high, filling the front yard,” Higgins said.

St. Edward’s students assisted in collecting the remaining debris FEMA’s equipment could not reach as the latter portion of the volunteer trip.

Following cleanup, Higgins walked the group of students through the first floor of his home, brainstorming ways to renovate in the wake of water damage.

“Maybe a French door right here,” Higgins said, gesturing in an empty room of his home. “And then over here, French doors out into the patio. And then make this an office or a study with desks.”

Some students felt their volunteer participation could have been more beneficial.

“I’m glad we helped, but I feel there are more people who were more in need,” junior Tirsa Bernal said. “It’s still sad that his house was ruined, it’s not a good situation, but there are still more people out there that probably aren’t going to get any help anytime soon.”

Higgins’ church, St. Ignatius, was hit by Harvey as well. The parish has been holding Mass at nearby schools, and is expecting repair on the pews, chapel and office buildings to last up to March 2018.

“Things are not going to turn to normal in quite a while,” Monica Hatcher, Director of Outreach at St. Ignatius said.

While the church has plans to repair their amenities, volunteers have also responded to each parishioners’ request for help regarding Harvey damages.

“When you’re responding to a disaster, you don’t know if you’re making the right moves,” Hatcher said.

Of the requests for help, approximately 67 households that sustained damages required a visit. Some homes needed multiple visits so that laboring tasks such as moving furniture out of flooded portions of homes could be completed.

“Our hearts go out to people who have it a lot worse than we do,” Higgins said. “Some people don’t have the financial resources to rebuild — that’s a lot of money.”

Finances and distribution of resources are critical conversations taking place at the state and federal levels.

National FEMA and Red Cross money is essentially being divided in half to accommodate flood victims from Hurricane Harvey in Texas and Hurricane Irma in Florida, per NPR.

Within the Texas Legislature, some elected officials support tapping into the state’s $10 billion “Rainy Day Fund” to help with disaster aid.

Other recovery concerns will likely grow, as only 15 percent of Houstonians have flood insurance, which is a statistic provided by Robert Hunter, the Director of Insurance at Consumer Federation of America.

The estimated flood damage to the region is approximately $35 billion. Some flood victims looking to fix their house out of pocket are eligible for federal help via grants or loans limited to $2,000- $4000, which “won’t get it back to what it was,” Hunter said.

Ultimately, a lot of people end up walking away from their home, Hunter said. So, he recommends for prospective homeowners to be aware of the risks when buying a house and to look at maps that detail those risks.

Houston and the surrounding areas are no strangers to flooding. When Hurricane Ike hit Texas in 2008, Campus Ministry organized volunteer groups to assist Catholic Charities and similar organizations with those recovery efforts, as well.

Recovery plans for the near future are also being made. Campus Ministry is organizing a second Hurricane Harvey trip in December. Student volunteers can serve with nonprofits in  cities around Houston not receiving as much attention and funding.

The people with water-damaged homes visiting Catholic Charities resonated most with junior Sarah Santillan, who said, “Their gratitude and their optimism was the best thing that we saw.”

Editor’s Note: The authors of this story took part in the reported volunteer opportunity.