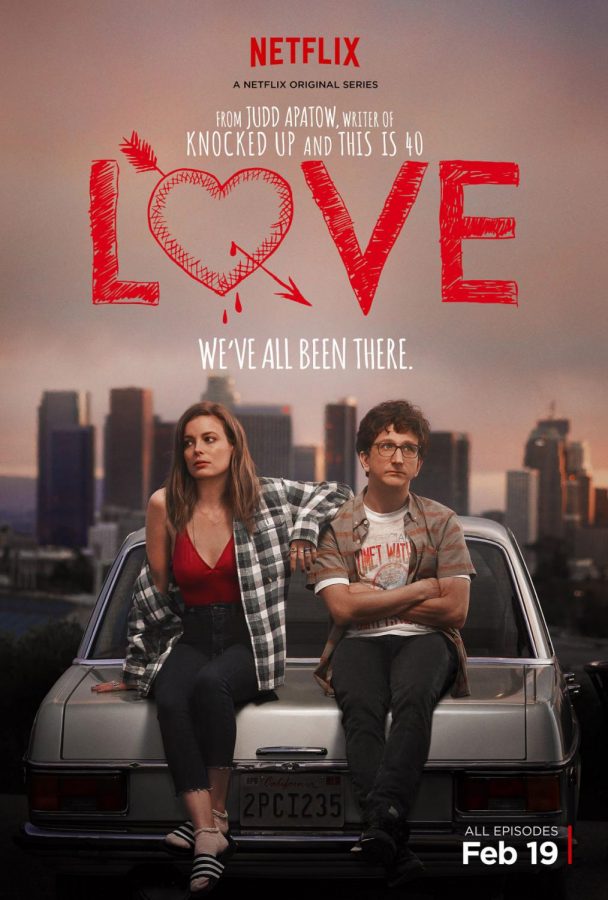 We’ve all been privy to the message of those sappy rom-coms: you know, the ones where normal but ‘quirky’ people have this spectacular meeting and proceed to fall in love. If that’s the story you’re looking for, then Netflix’s newest series “Love” is not for you. Instead, the show gives you a harsh and possibly jaded look at the modern dating world.

The series follows the interactions between satellite radio program manager Mickey (Gillian Jacobs) and Gus (Paul Rust), who tutors child actors on the set of a TV show. Created by Judd Apatow, Lesley Arfin and Paul Rust, the show examines modern dating from a standard and wide-lensed point of view.

The show opens with both Gus and Mickey at their lowest points. Gus breaks it off with his long-term girlfriend, Natalie, when she lies about cheating on him. She claims that Gus is a “fake nice guy,” one that is actually a jerk but hides it behind his calm demeanor. This is such a problem, Natalie claims, that she has to lie about an affair in order to break up with him.

In the pilot, Mickey is on the other side of the relationship spectrum, casually having flings with a cocaine addict ex-boyfriend, Eric. The relationship between the two is off-and-on again, and Mickey is ready for it to be over by the end of the evening. Eric decides to leave in order to go pants shopping with his mother, and the relationship comes to an end.

The show makes use of its 22 episodes in terms of both pacing and establishing the two main characters. Gus and Mickey only meet in the last few minutes of the first episode in a convenience store when Mickey leaves her wallet at home. Gus steps in and buys her a cup of coffee and cigarettes, and from there the two start to connect.

The two grow closer, but as any other rom-com will tell you, complications ensue. Mickey decides to have casual sex with her boss, sets Gus up with her Australian roommate, Bertie, for the worst date possible, and then blows him off to do drugs with Andy Dick in a subway station. On the other hand, Gus begins flirtations with an actress from the set he’s on and ignores Mickey after their first date.

The show doesn’t only give the point of view of Gus and Mickey. There is a shift back and forth between the two, but it also incorporates the stories of other characters. Because of this, we get to see both the interesting and destructive tendencies of both leads. Gus does have this quality of nicety that influences how others treat him. Mickey is — in simplest terms — an addict, of not just drugs and alcohol but of wild decisions, and in both her choices of sex and love.

It’s refreshing to see people not have a picture-perfect relationship on screen. The real world is messy and complicated, and the romance being portrayed in this twisted manner is so much more interesting to watch. Love is something we spend so much time thinking about and working on, so it should be seen in a light we don’t often get to see.

One of the other key features of the series is its use of multiple perspectives to create ambiguity in the audience. We aren’t expected to relate with these characters like one would with the average romantic comedy. We see that these are awful people who’ve done some nasty things. But by the end of the first season, there’s hope that Mickey and Gus will find love in one another.

Season two picks up almost immediately after the first, continuing the journey between the two characters. The show’s odd pacing is able to convince the audience that Mickey and Gus have known each other for a longer period of time than depicted. By the end of season two, the two have spent roughly two months together.

Moving past the initial parts of meeting and dating, season two of “Love” focuses on the pitfalls and dangerous portions of relationships. This includes regression, changing oneself and passive behaviors. Both Mickey and Gus are established as flawed characters, and by having them exhibit these self destructive tendencies, “Love” makes sure that the audience is no longer rooting for them.

The season gives both highs and lows in the relationship of Gus and Mickey, showcasing just how easy it is for things to change. One minute the two are enjoying spending the day together, and in another, the two are each each others throats, trying to hurt the other. The writers are able to masterfully balance these two emotions, and the show as a whole exists in the middle of the heated emotions.

“Love” is, in a nutshell, a complicated, disturbing but honest way of portraying what modern relationships look like. From its use of romantic comedy tropes and cliches to the odd view on character qualities, “Love” is able to defy expectations and provide an interesting voice in TV’s open dialogue about dating.

Season one and two are available to stream on Netflix with a binging format in mind. With a third season confirmed and already on the way, “Love” is a show that’ll be talked about for months to come.