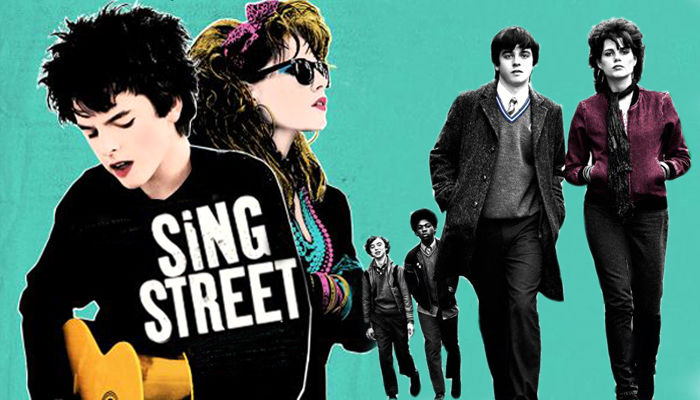 From the 1980s filled “Stranger Things,” to a media landscape full of reboots, 2016 proved to be the year of nostalgia. For some, this was a regression for film and television, trapping itself in the past. For others, it was an attempt to right the cultural wrongs of less progressive eras. Either way, nostalgia was a recurring theme in the mainstream of pop culture.

From John Carney, the director of “Once” and “Begin Again,” comes “Sing Street,” a film that looks back to the 1980s and the significance of pop music in Ireland. The film tells the story of Connor (Ferdia Walsh-Peelo), a struggling musician and social outcast, as he tries to impress a girl, Raphina (Lucy Boynton). Connor tells Raphina that he needs a model for his non-existent band’s music video, and she agrees.

This simple premise propels the narrative, as Connor is forced to gather a group of other boys to fill the ranks of the band. Naming themselves Sing Street, a reference to the name of their Catholic boarding school, the band slowly becomes a functional unit. Ranging from the musically inclined and rabbit loving Eamon (Mark McKenna), to the ginger band manager Darren (Ben Carolan), the band comes together and instantly clashes in ideas of style.

The breakout character of the film is Connor’s older brother, Brendan (Jack Reynor), who serves as the musical mentor to Connor, introducing him to various styles of music and what music should mean. Every scene that Brendan appears in is stolen, at times making the audience wish they could see his story.

The film follows through the misadventures of the band, as they create a full setlist and a library of amateur music videos. The director intercuts musical performances to genuine human moments, ranging from Connor’s crumbling home life, to his failed attempts to romance Raphina. The interplay of these scenes creates a sense of where the music the band preforms comes from, as well as grounding an otherwise fantastical journey for the teens.

The actual music the band performs cannot be described in a single style. The most realistic thing about the film is the manner in which every time Connor writes a song, it changes style depending on who he’s been listening to. Anything ranging from David Bowie to Hall & Oates, based on the records his brother has passed along to him.

One of the breakout songs is “Drive It Like You Stole It,” which serves as an instrumental set piece for the style of the film. The music video plays out as a fantasy of a teenage who’s seen one to many American movies. The music video resembles a scene from the ‘50s setting of “Back to the Future.” It’s full of cheesy action, feel good romance and a wish-fulfilling ending. The sequence alone justifies watching the entire film, even if high school drama isn’t the standard person’s cup of tea.

Unlike the other two films directed by Carney, “Sing Street” manages to escape the depressing and bitter ending. Instead, the film manages one of hope for the future, while maintaining the sense that one does not need to sacrifice in order to follow dreams.

“Sing Street” manages to capture the upbeat and pop music filled 1980s, while also telling the genuine and honest story of how people can connect and find solace in music, even when their world is coming down. However, the biggest takeaway from the film is that at the end of the day, musicians are just out there trying to impress someone.