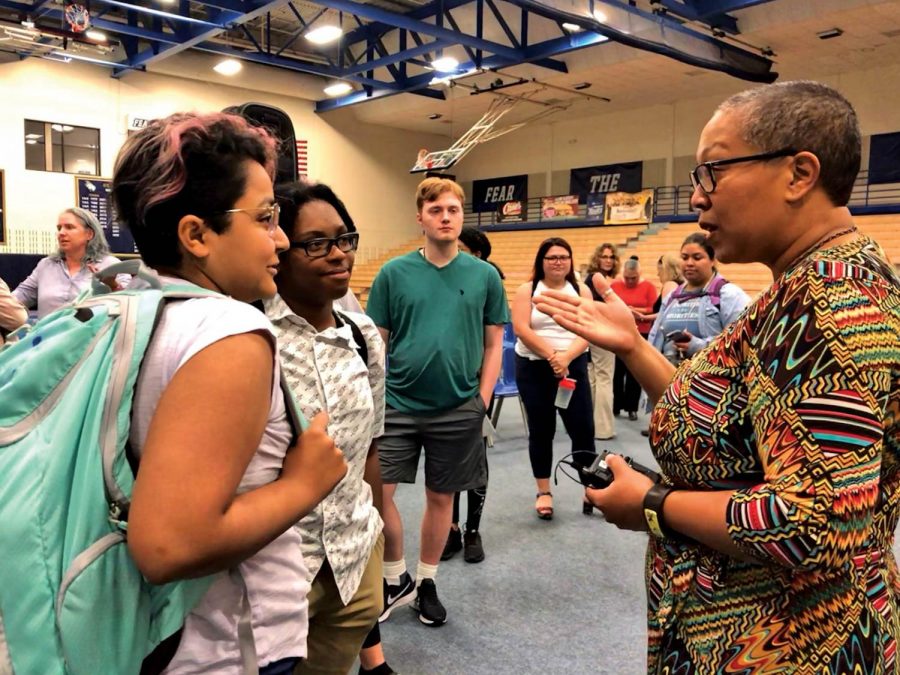 The entire Recreation and Convocation Center, packed with over 700 students and faculty, shuddered with shock and unease at the drop of a single question.

“My friend from the crowd was wondering,” one freshman asked Common Theme speaker Eliaichi Kimaro, “about your thoughts on the Kavanaugh case.”

Kimaro, a queer, mixed-race, first generation American filmmaker, visited St. Edward’s University on Oct. 4 to speak on this year’s common theme of identity, emphasizing the importance of storytelling. Her documentary, “A Lot Like You,” explores her mixed-race identity and cultural roots through her journey back to her father’s homeland at Mt. Kilimanjaro.

Kimaro spoke about the discovering the disturbing history of sexual violence among the women of her Tanzanian family, which she recognized as a commonality, being a survivor of sexual assault herself, prompting the student inquiry about the then-unfolding Kavanaugh case. This would be days before Kavanaugh was controversially confirmed as a Supreme Court justice amidst sexual assault claims.

“Dr. Christine Blasey Ford went to my school, and it has really shaken our little internal community quite hard,” Kimaro said, addressing the student’s question. “So many people believed her and it doesn’t matter; it’s not mattering. That is the heartbreak that I need to figure out what to do with.”

“But what I will say is,” Kimaro continued, “her testimony was very inspiring to a lot of people. It is not lost to me how many survivors are coming forward or how many people are finding the words to speak their truth for the first time. We’re at a tipping point and you can’t unhear what you’ve heard.”

The audience applauded after Kimaro finished her answer.

Within the context of the #MeToo movement, Kimaro said in an interview with Hilltop Views that she’d hope her film would be used as a tool in the movement to give people the courage to tell their stories and “contribute to this groundswell that is moving us towards change.”

“We put undue burden on victims and survivors,” Kimaro said about the resistance the movement has encountered, “to prove to us that not only did this happen to them without a shadow of a doubt, but they have to walk this very fine line of being the most perfect and credible survivor.”

Kimaro’s ultimate goal, she expressed during her speech, was to convince audience members to tell their own stories, exemplifying her own experience from making the documentary to show the power of stories to heal, be seen and create change.

“Her liberation of the trauma and how she uncovered it and was able to accept it and have it be apart of her but not define her,” freshman Angela Robles said about Kimaro’s speech.

“That’s something that I’m experiencing right now and just to have someone else say it and to hear those words, it’s liberating and puts me in a better place,” Robles said.

A number of students waited around after Kimaro’s speech to talk to her, with many expressing that they shared one of her expressed identities as first generation, mixed-race, queer or otherwise.

“She did mention that she was queer,” freshman Nicolas Campbell said. “How I feel about my sexuality and trying to determine that, especially when I have people pulling at me from every angle, has been something that’s been a very deeply influential and difficult process for me. So, I wanted to get her advice, since it seemed like she was in the same boat when it came to her race.”