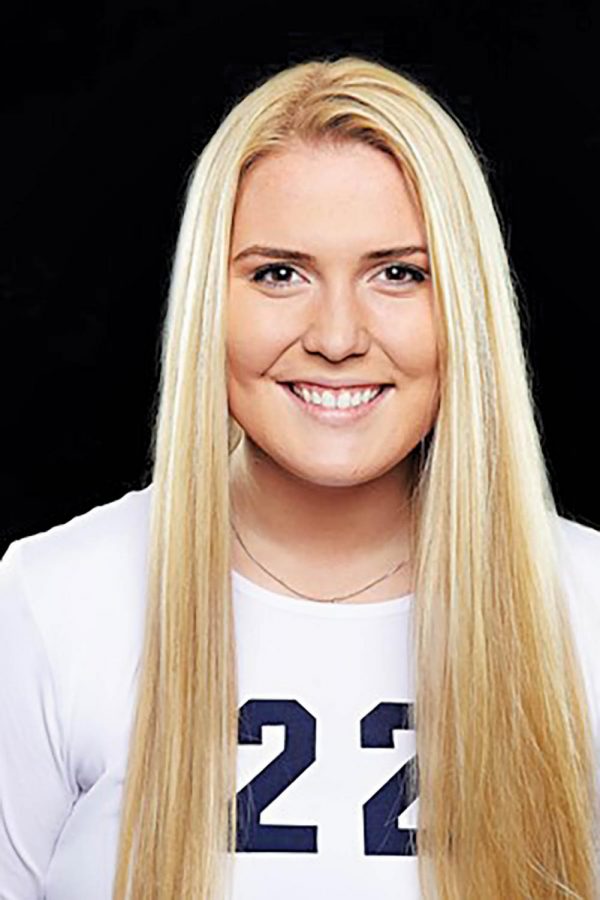 Senior Kate Hendrix has been a crucial member through her collegiate career.

Although SEU had already clinched a spot in the Heartland Conference Tournament, the stakes remained high for the “Battle of the Saints” game, as the brewing rivalry marked the end of an era for the class of 2019.

The game began with high intensity and many hustle plays that came with every spike and serve. Trailing in the first set, SEU was able to pull ahead with the help of some crucial kills by senior outside hitter, Kate Hendrix. The win gave the team momentum going into the second set, however, they still fell short to the rattlers 25-19.

The third set was a turning point as SEU topped the rattlers 25-14. Their defense was crucial in keeping them in the game.With a necessary win in the fourth set, SEU battled hard. Ultimately, however, they were defeated by a small margin.

As a veteran to the program, Hendrix recounts the win as a memorable one. Emotions ran high and the moment was bittersweet.

“It’s really exciting, it’s our last year so it’s all or nothing. I think that we really need to focus on playing our best game and if we do that we should come out on top,”Hendrix said.

The highly-anticipated game did not disappoint, as the game went into five sets. The beginning of the fifth was a close play; however, with offensive pieces, such as Hendrix, Mikayla Parker and Maddie Miksch, SEU was able to pull away with the 15-12 win.

With a high of 34 digs, senior libero, Morgan Beckham, attributes the win to the preparation leading up to the game. Besides drills and teamwork, Beckham said high energy was a key factor in their win.

“It was an emotional game, so we tried to keep ourselves in check, but we have a lot of great underclassmen who stepped up and played for us and I think that helped a lot during the game,” Beckham said. “We’ve been working really hard in practice, coming in early and working on specific drills and I think that everyone did a great job on following through with what we’ve been working on.”

As a result of SEU clinching a spot in postseason play, Hendrix describes the opportunity to play for a ring as breathtaking. While the team is playing the same teams they have competed against during their regular season, Hendrix knows there will be challenges. Hendrix is confident in her team nonetheless.

“It’s really exciting. It’s our last year so it’s all or nothing. I think that we really need to focus on playing our best game and if we do that, we should come out on top,” said Hendrix.

SEU will continue to prepare for Heartland Conference Tournament as action commences Nov. 8-10.