An interview with Laura Morrison, candidate for mayor of Austin 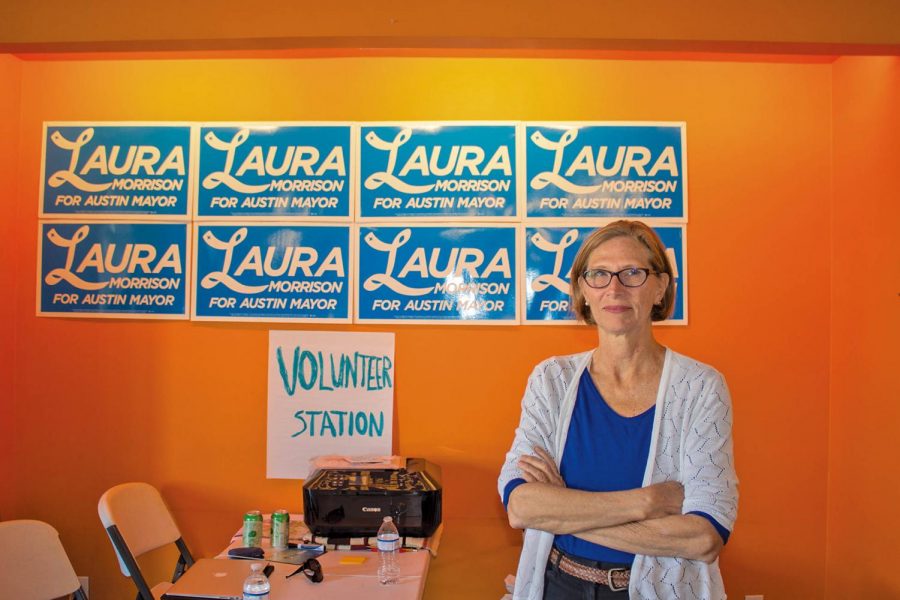 Laura Morrison at her campaign office on Guadalupe street. Morrison worked for several years as a community advocate before becoming a member of the Austin City Council.

As the midterm elections steadily approach, the national spotlight on the Texas Senate race has overshadowed local races, like the one for Mayor of Austin. Laura Morrison, a former Austin City Council member and community advocate, is running to replace Steve Adler as mayor, a position he has held since 2014. Hilltop Views interviewed Morrison; the following article contains excerpts from that interview that have been edited for clarity and length.

How did your time serving on the City Council shape your views on Austin’s issues and your vision for its future?

Morrison: I came to City Council after being real involved in a lot of things in the community. Certainly the challenges of a growing city became much more poignant. The real challenge of how to accommodate that growth in ways that the community remains strong and doesn’t get displaced, so that it’s a positive thing for the community as opposed to being victimized by it. One critical part of how you manage all that is the budget, and so, as a Council member, I got to be quite familiar with the budget and the tools and options we have for making sure the budget supports where we want to go as a community.

You have been critical of the city’s much-maligned CodeNext land development code. What are the problems with CodeNext, and what would you seek to change about it in the capacity of Mayor?

Morrison: The fundamental problem with how it got so off track is that it abandoned the priorities and processes that my council put in place. The priority to make sure that families could stay in their homes was clearly not a priority anymore when they put out their first version and 140,000 people were going to be displaced. It was supposed to be a community-driven process and it was not. The community advisory committee that we put together was essentially shut out of any discussion. It needed to be a community conversation early on and then you spend the money to develop it. We need to restore trust in city hall. I think that we’re going to have to break it down into smaller pieces to be able to build back some of that trust.

So would you say the problem with CodeNext has been its execution?

Morrison: Well, it was clearly a bad product. Clearly the execution was the problem, and the fact of the matter is there are other cities that have done this and they’ve managed to be successful. Steve Adler had an opportunity to stand up and be a leader. It’s a failure of leadership.

How do you feel about the recently announced deal to bring a major league soccer team to Austin?

Morrison: It would be great to have Major League Soccer here. I am not a fan of the deal that the city struck, led by the mayor; how they structured a deal to put a stadium on publicly owned land. The deal was structured in such a way that this for-profit corporation [Precourt Sports Ventures, the owner of the proposed MLS team] does not have to pay any property taxes. And that’s not just city property taxes. They don’t pay school property taxes, they don’t pay ACC or health district or county taxes, which could amount to hundreds of millions of dollars, which is the biggest subsidy the city has ever managed.

One thing your campaign has focused on is improving public transport in Austin. What are the system’s current problems and what would you seek to change?

Morrison: It’s inadequate and growing more so by the day, because we have more people it needs to serve and it is not able to serve even the people we have now. I think it’s important that we have a multi-pronged transportation system to address mobility, but the biggest hole we have right now is high-capacity transit. We’ve had some attempts in the city to get something like that started, and this mayor has not said woo about it until this August. For me, the real key is making sure that we have people on the ground in the community that help us come up with what that plan is so that it’s embraced by the community, is equitable, understands displacement and disruption and has proactive programs in place to deal with those things.

You worked on an initiative called ECHO (Ending Community Homelessness Coalition) during your time on the Council. What do you view as the role of government in solving this issue, and how would you go about combating it?

Morrison: I think it’s a serious and monumental role. Obviously, there are a lot of organizations that are working on homelessness and the city needs to be a major partner in those efforts. I worked on a program called “Pay for Success,” and that’s where we were able to pull together data on the most expensive 250 homeless people in town and found that it would be much less costly to provide housing and services for them. And so the idea is that if we can get some private investment, the city can provide them those services and the city is going to save money.

Your campaign website notes that the price of housing has “skyrocketed” in recent years. What do you see as the causes of this, and what would you do as mayor to tackle this issue?

Morrison: The causes of it are lots of demand, and there are some market forces and some global phenomena like international investments in real estate that are affecting that. There’s the commercialization of residential areas by companies turning houses into hotels; there’s a big business now of buying up homes and turning them into short-term rental hotels, which is detrimental to the schools because now you don’t have kids living there. In terms of what the city can do, this idea of ‘build, build, build and let’s let supply be the answer’ doesn’t work anywhere. One of the biggest problems is that people of modest incomes are having a hard time finding a place to live in this town. Of all the new units that were built in the first six months of this year in Austin, 88% of them are in the ‘luxury’ price range. We need to build our supply in the right places and increase density in the right places. We need to require affordable housing to come along with it, so it’s a whole toolbox of things to do and things to not do.