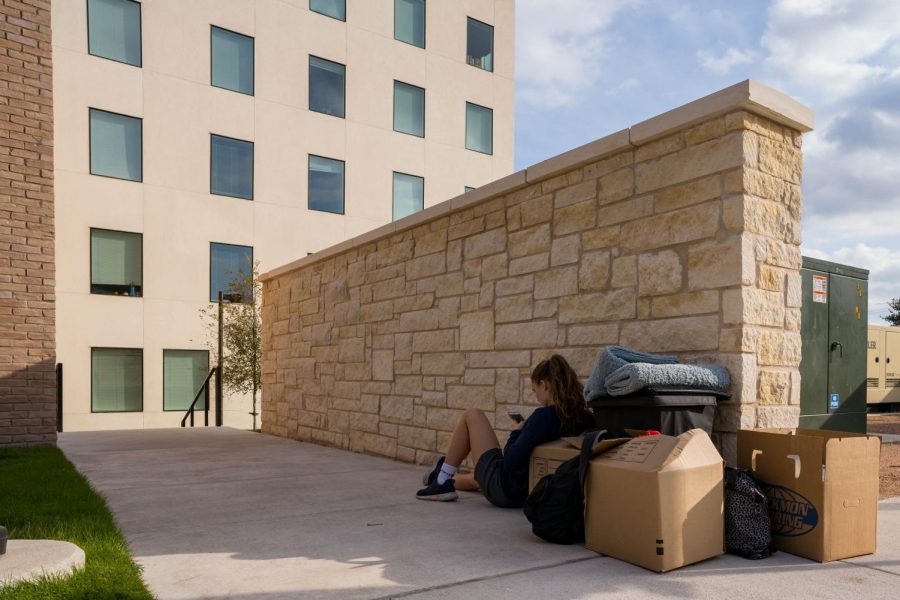 A student waits with her luggage outside the Pavilions residence hall. Students from three of the four wings will be unable to reside in the building for the remainder of the semester.

Residents were displaced after a water main erupted around 8 p.m. in the Pavilions residence hall on Nov. 1, causing damage to the building and students’ belongings due to flooding. Students were evacuated and told to move to the Recreation and Convocation Center, where Resident Advisors and Resident Directors took attendance and tried to locate remaining students who were unaccounted for.

“Water started pouring in through everyone’s rooms and through our kitchen,” junior Alyssa Chern said. “When we walked outside, there was water gushing out from the ceiling and the hallway. We ran downstairs and there was water everywhere.”

The initial hours were characterized by confusion as students scrambled to find a place to stay for the night and university administrators attempted to respond to the developments.

“Right outside my door, the fire alarm light started going off, but no sound,” junior Casey Laughlin recalled. “I had no idea if it was a serious situation or just a bug. We ended up just going to our RA next door and asked him what was going on, and he didn’t really know what was happening either.”

Pavilions residents received an email from the university around 11 p.m. that stated students with medical conditions would be able to return to their rooms, accompanied by RAs, to retrieve any important medications.

Students housed in the South wing of the building will be able to reside there for the remainder of the semester. The students housed in the West, North and East wings will be given temporary housing assignments and refunded a prorated amount of their living expenses, according to an email sent to Pavilions residents.

“Our focus right now is really helping students get their personal belongings cleaned if they are salvageable and get them into a stable residence for the rest of the semester,” said St. Edward’s Director of Communications Mischelle Diaz.

The flooding is only the most recent issue concerning the Pavilions, a project that has experienced delays – students were initially told the facility would be open in the fall of 2017 – and various other problems from the outset.

“The building has had issues from the beginning and that is not lost on us,” Diaz said. “This would normally be a very difficult situation and we understand that it has multiplied because of the frustration that students have already had even just getting in the building.”

Residents of the North, East and West wings are being housed temporarily in East Hall, which was previously unoccupied, and downtown at West Campus near the University of Texas.

“Obviously this is incredibly disruptive and disappointing and any other word that you can think of and so I know that residence life is very focused on looking at students’ situations – what kind of setup did they have, did they have roommates, what special needs do they have and then really try to accommodate students the best they can,” Diaz said.

The university will be providing “hardship grants,” ranging from $500 to $2500, that will be distributed to students that experienced damages.

“There are hardship grants that are being given to students depending on their level of loss, some students are also being compensated not just from the university but maybe they have renters insurance,” Diaz said.