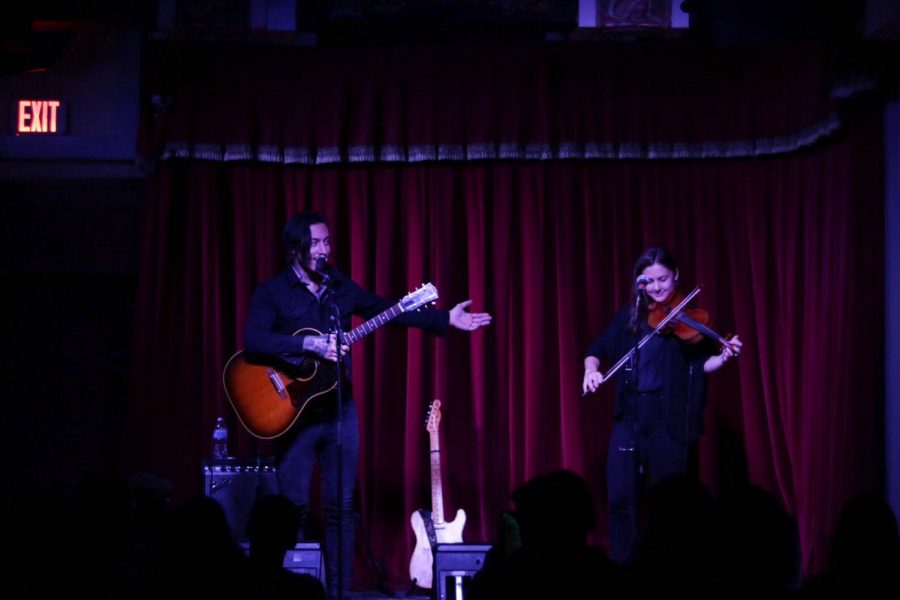 Concerts, by their definition, are one of the most intimate things a human being can experience. A group of strangers coming together for one night only and bonding over a shared love of music? Heaven.

This feeling amplified this past Saturday for Noah Gundersen’s acoustic performance at Cactus Cafe. After putting out his third full-length studio album over a year ago, he returned to Austin for an intimate show. Having previously seen him live two times, I was not disappointed.

The venue itself was an intimate setting deep within the student union of the University of Texas. Once I was able to find the venue, I quickly realized why it was named what it was. The walls were adorned with cacti and brightly woven rugs.

Being such a small space, the venue could only accommodate around 150 people. This led to the show being completely sold out and allowed me to be up close and personal with the stage.

The crowd ranged from young to old– making for great people-watching. Having never attended a concert by myself before this one, I can now heavily recommend it to anyone having doubts.

Jason Robert Blum, a friend and member of the band Glorietta (that Gundersen is also a part of), warmed up the crowd with songs from his debut album and from Glorietta’s recent self-titled release.

Finally, Noah Gundersen and his sister Abby took to the stage. For those who have never listened to his music, Gundersen plays with the majority of his family on his records. Abby provides backing vocals and violin.

The duo opened up with “Isaiah,” a track from Gundersen’s debut album “Ledges.” The song deals with themes of cheating, mixed with religious undertones. They then followed up with “Halo (Disappear/Reappear),” a song off of his sophomore release “Carry the Ghost.”

Though Gundersen’s musical style changed, involving more rock and electric sounds on his latest album “WHITE NOISE,” he still managed to do some beautiful renditions of songs from it, including the closing song “BAD DESIRE.”

Gundersen’s talent is something to marvel at, from his strong, raw vocals on his most heart-wrenching songs, to the falsetto he employs on tender moments that make you feel like you are experiencing his pain.

Fans in the crowd were delighted to hear that new music is in the works as Gundersen played a few unreleased tunes from his upcoming album. Gundersen has a quiet stage presence, cracking the occasional joke. He is relieved at not being able to see the crowd in the dark, perhaps due to there being less pressure when he can’t see us.

His humble nature also carries off stage, as I managed to catch him outside after the show to sing his praises well. All the while he looked shy, unaware of how impactful his music truly is.

Intimate, stunning and unforgettable. I look forward to the next time Mr. Gundersen comes to town and graces us with his musical presence.

For anyone looking for a taste of what his music has to offer, here is a small sampling of some of his best tracks.