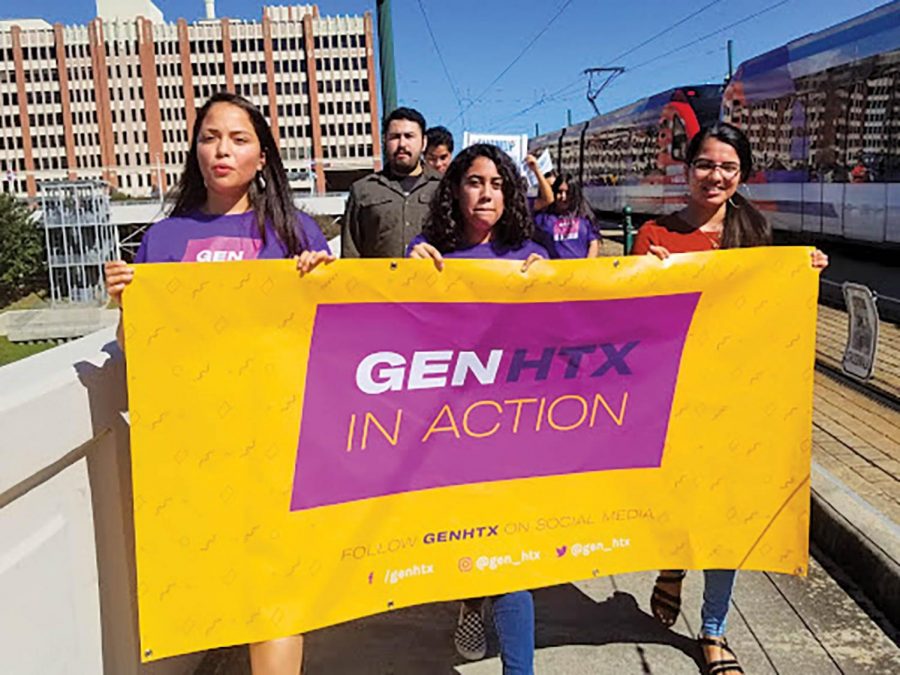 Houston based activist Antonio Arellano became known to Hilltop Views through his involvement in creating the #TrumpTweetTruck which made its way around Texas this election season. Arellano is currently the communications director for Jolt Texas, an organization which focuses on organizing the Latinx vote in Texas around issues important to that community.

Recently, Jolt Texas collaborated with multiple other political advocacy groups in the Houston area to organize a get-out-the-vote event called #GenHTX. The event intended to inspire young voters to become active in the Houston political community by providing free entertainment and food as well as a march to the polls in downtown Houston.

While organizers were excited to see months of planning come to fruition, the event had disappointing attendance. Arellano’s main takeaway as the event closed was that throughout the organizing process he felt that an older generation that is out of touch with young voters attempted to determine what would motivate those young voters to get out to vote. He believes that #GenHTX was just the beginning of a genuine movement to get young people involved in politics.

As a young person himself, Arellano has been using his platform on Twitter to reach out to an audience of almost 90,000 followers to promote his message to primarily young Latinx voters. His position as a public figure puts him at risk, as he is a recipient of Deferred Action for Childhood Arrivals or DACA recipient. He first came to the U.S. from Mexico when he was three years old, and despite being active in the Houston political community, his citizenship status prevented him from voting in the midterm elections. Although, Arellano made clear that his political involvement has made him feel as though he has been able to cast hundreds of votes through proxy.

In an interview with Hilltop Views following the #GenHTX event, Arellano describes what it’s like to be an activist and a DACA recipient as well as emphasizing the importance of voting and civic engagement:

You’re here today to encourage the people of Houston to vote. As a DACA recipient, can you describe how it feels to not be able to vote even though you’ve grown up in the US?

Arellano: Undocumented people in the United States right now are pushing forward the civil rights movement of our era. If you correlate the similarities that exist between the civil rights movement and the undocumented movement in America what they were fighting for was their humanity to be recognized and that’s exactly what undocumented immigrants are fighting for right now. The humanity of these individuals to be recognized and to not be considered criminals, rapists. We come from a generation of parents who have sacrificed it all to bring DACA recipients to this county for an opportunity at a better education, and we owe it to them and their sacrifice to propel our generation forward. Our resources are limitless, we have opportunities to organize like our ancestors could have only dreamt of. Right now, through social media and digital content dissemination, we are able to amplify our messages across our communities, across our state,  across our nation and around our globe in a matter of seconds with the use of a couple of clicks. So, our generation before us lived in fear. Our parents come from a generation that was like if you’re undocumented you should hide you should not speak, you should not drive, you should not participate, you should not engage, out of fear that you would be recognized, singled out and deported. We can no longer afford that luxury. We are entering a new era where we can no longer tolerate disrespect, discrimination and racism and sit idly by while our communities are targeted. It is imperative that the youth of this country, the undocumented youth of this country, mobilize and push forward an agenda that will propel our country into a new era of opportunity and prosperity for all.

What do you have to say to the young people who will read this article in terms of being politically and civically involved especially in the context of those like yourself who cannot vote?

Arellano: If you can vote, you must vote. It’s imperative that you amplify the voices of the people that are unable to. We are depending on you. We are counting on your progressive ideas to fight against an oppressive administration. We seldom realize history while it’s happening. What is happening today in america is of historic and monumental proportions. The world will reflect on how you mobilized and how you voted today. November 6th is a crucial and pivotal point for america. This election will not just define what party takes control of the senate or the house. This election will define the spirit and soul of the democracy of the United States. What we’re fighting for now is not necessarily for one political ideology, but it’s for the future of our county.

What gives you the courage to broadcast yourself so publicly on social media, knowing that this administration is fighting so hard to strip people of their DACA status?

Arellano: It’s about survival. The reason that I amplify the voices of my community is because we demand respect and dignity. There is no need for politics to incorporate discrimination and racism in 2018. We should not have to be singled out or target cultural difference or heritage backgrounds in order to pass legislation in America. That has no room in politics and we have got to put an end to it. But before we do, we have to address it. We cannot continue to sweep racism and discrimination under the rug and pretend like it’s not a part of our daily lives. The civil rights movement did a lot to advance our rights here in this country. Corretta Scott King said it best when she said “Every generation must fight and win their freedom. This is our fight for our freedom.”

Arellano: Whenever I started localizing my perspective and my point of view I was pleasantly surprised to realize that there were so many of us, and that the beautiful thing about this. We are a community of human rights activists across the United States that understand that it’s fundamental to be active now more than ever. And what I’ve been able to do is nourish these relationships with individuals that understand the importance of this so that we can communicate across our social media platforms with regards to strategy and amplifying each other and support. Because when we are one it’s very difficult to mobilize, but when we are many we are unstoppable.

Can you pinpoint a moment in your life when you realized that you were going to be politically involved and become an activist?

Arellano: First of all, I don’t think anyone grows up thinking they’re going to be an activist. Like I don’t think anybody’s like ‘oh, I wanna be an activist when I grow up’. I’m doing this so that people can have the opportunity to dreams their fullest dreams. The dream is not to be an activist, the dream is not to be protesting. That’s no the dream, but we were supposed to be the generation that were able to dream limitlessly because our ancestors fought this fight already. But the fact that we’re being so regressive and the current administration is pushing us back has made us have to fight once again, but we’re fighting this fight because it’s bigger than me. It’s about an entire generation and an entire future generation that will look back on us and say what did you do to protect my opportunities, and that’s why we’re fighting. Because it’s about survival and it’s about perseverance, it’s about determination, it’s about making sure that the opportunities that are human rights should be accessible for all, and not just a privileged few.

You’ve created the #TrumpTweetTruck sensation, what’s next for you? How will you prepare for the 2020 election?

Arellano: The next couple of years will be very very focused on recruitment and engagement of the young electorate. Our generation will soon be the largest voting block in Texas, and we have got to make sure that particularly people of people like latinos see themselves in positions of government, and have the opportunity to come out and vote. That they understand that their vote matters, that their voice is powerful and that they have a future to craft and that’s the future of America. So the project is to continue to knock on doors, make calls and make engaging events to keep our community fully committed to civic engagement. And civic engagement can mean a lot of things it doesn’t necessarily just mean vote. It means volunteering for a campaign. It means block walking. It means canvassing. It means just having conversations that may be uncomfortable about politics with your relatives, your family members, with your friends. And if we can continue to push forward that narrative and facilitate that process for our community we will win.