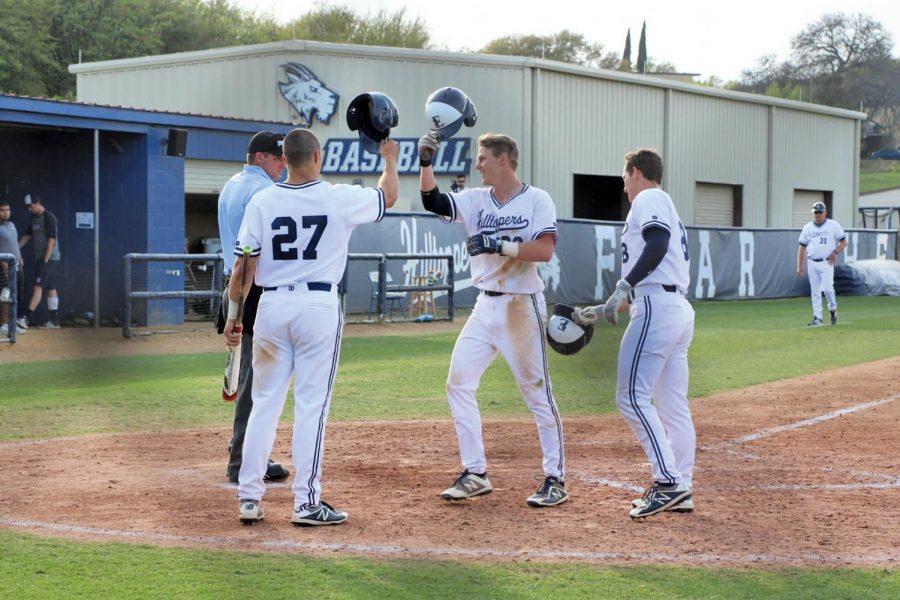 SEU is projected to repeat as Heartland Conference champs once again.

Coming off their sixth consecutive Heartland Conference championship, the St. Edward’s baseball team seems to be in excellent shape being ranked No. 5 in the region, and they are expected to win the conference once again.

Despite losing seven seniors from last seasons, 2018 conference Coach of the Year, head coach, Rob Penders, is positioned to win one final championship in the Heartland Conference before the team enters the Lone Star Conference in 2020.

This season can be highlighted by freshman infielder Morgan Allan and 2018 conference, Freshman of the Year pitcher, Blake Holub.

As preseason begins, Allan has won the starting spot. With the composure of a veteran, his transition to collegiate ball seems to have been a smooth one. Describing the change as one that revolved around improving his physical shape and leadership, he is ready for the upcoming season.

“Baseball is not an individual sport; it’s a team sport and being shortstop, you have to be a leader,” Allan said. “I’m trying my best to as a first year come in and lead the team the best I can..”

Senior catcher Robbie Lammons is poised to have a good season, as he has not only recovered from shoulder injuries, but he has also focused on the mental side of his game.

Lammons says he’s ready to lead his team on the road to another championship, and he is excited to play alongside his talented teammates one last time.

“I’m not going to settle for anything less than a national championship. I will give my team the best chance to help them win every single game,” Lammons said. “Everyone’s definitely improved from last year, but a few guys that I think are going to contribute a lot are Morgan Allan, Tyler Brown and left-fielder Jacob Johnson.”

Penders is excited about the talented incoming class.  He attributes the successful recruiting to his assistant coaches. Relying on young guys greatly this season, he is confident in offering the senior leadership that Lammons and company carry throughout the team.

Aware of what relying on young guys can bring, he is optimistic about the challenge and confident in the program he has built.

“My assistant coaches have done a great job of getting some good players in here and this season we’re going to depend on freshmen to do a lot of things,” Penders said. “You can’t simulate game experience; they have to get out, pitch and face adversity. I have an open mind with them and if I give them the opportunity to be the best player they can be. We’re going to be good as a program and that’s my job. [it] is to make us the best as a collective group.”

After sweeping their first series, The Hilltoppers (3-0 preseason) are off to a promising start to their 2019 campaign, as they will travel to Colorado to face Regis University Feb. 8 for their second preseason series.