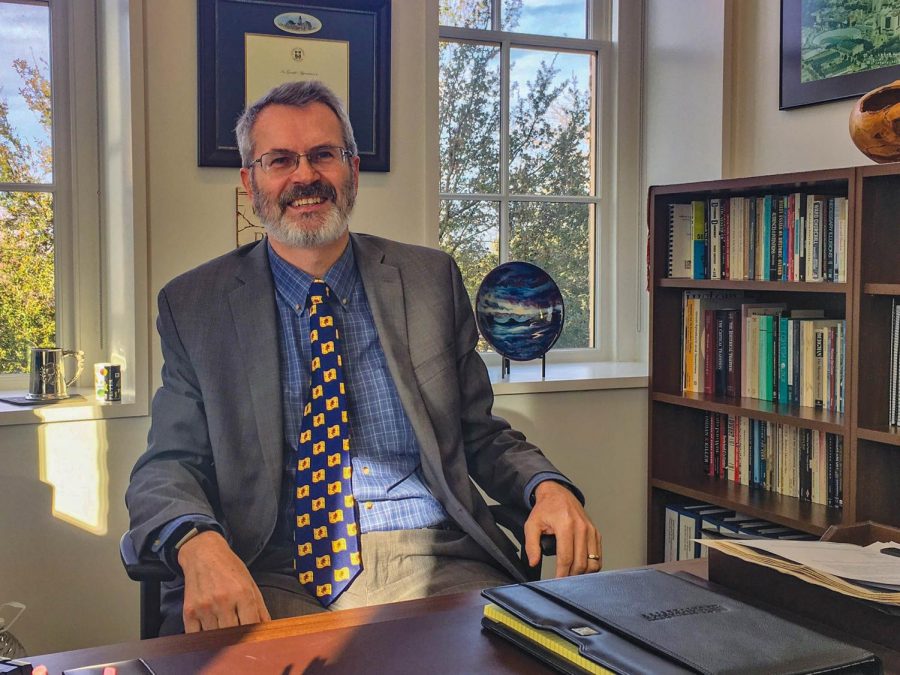 Dr. Mitchell has taught at St. Edward’s for 25 years and specializes in areas of Rhetoric, Media Studies and Secular Studies.

Dr. Innes Mitchell’s scottish accent draws students in, but it is his compelling words that hold them. His effective use of rhetoric is exactly what is necessary for his course, Perspectives on Atheism, which confronts the Catholic substructure of St. Edward’s.

“It was sort of an outgrowth of another class I was teaching,” Mitchell said. “I was teaching a contemporary theories class of rhetoric because I am a rhetorician. And one of the things we do in that class is try to tie it around themes, like new social movements.”

Social movements remain one of Mitchell’s biggest research interests. He has researched and taught on the Scottish independence movement, the media reform movement and then, starting in 2010, the New Atheism movement.

“In 2004 there was the New Atheist movement with the publication of Sam Harris’s ‘The End of Faith.’ There was a real upsurge in writing and interest in New Atheism,” Mitchell said.

After incorporating themes from the New Atheism movement into his contemporary theories class, the idea for the course grew organically. In 2010, Dean Father Louis Brusatti signed  Mitchell’s curriculum development that explained the rationale behind the course.

“Louis was enthusiastic. He supported me to go to a conference (the Atheist Alliance International Conference) in 2009 in Burbank, California,” Mitchell said. Brusatti was a source of support and recognized that the course aligned with St. Edward’s mission: to teach the whole person, the heart and the mind.

“He was very clear in terms of seeing the value of the course. It’s the whole person, you know. If you have students who don’t believe, in order to address the whole person in a holy cross education, you have to acknowledge that,” Mitchell said. “You have to acknowledge that it is a reality that a good portion of your students are not going to have the same kind of relationship.”

In a powerpoint titled “Atheism on Campus,” Mitchell’s statistics show that college-aged Americans are the least religious demographic in the nation. It also shows that one in four millenials are not committed to any faith tradition.

“It is based on reason, and reason means you have an informed and critical analysis of your own beliefs,” Mitchell said. “Traditionally, what has happened is that religious belief has been kept at arm’s length in terms of any critical inquiry,” he added.

Mitchell agrees that the mission of the university is to seek out truth and provide a space in which students may confront their own questions on religion.

New Department Chair of Communication, Dr. Stephen King, speaks highly of Mitchell despite only knowing him for six months.

“Dr. Mitchell has gained a well-deserved reputation for creating the kind of academic environment that students consistently find to be both academically challenging and personally rewarding,” King said. “He truly cares about his students and wants them to succeed.”

Alumna and former student of Mitchell, Molly von Berg, mirrors King’s impression of him. Von Berg took Perspectives of Atheism in the spring of 2017.

“I absolutely love him. He was a mentor to me and I took like five of his courses,“ von Berg said. Von Berg took the class partly because Mitchell was teaching it. She had thoroughly enjoyed his previous classes.

“It was interesting because I didn’t see how it fit into the discussion of communication at first, but it seemed like an interesting class, nonetheless,” von Berg said.

According to von Berg, the class dealt more with how individuals interact with religion, and the significance of religion in American culture.

“Having a class on atheism at a Catholic school is interesting,” she said. “I think a lot of people in college are kind of in a place where if you were raised religious, you start to decide whether or not you will continue going to church on Sunday. You start to question a lot more and learn a lot more, too.”

The class, as Dr. Mitchell explains it, offers a critical examination of religion, but also introduces students to personal ethical inquiries. Von Berg agrees with this as she recalls a book assigned in the course titled “Meditations from the Humanist: Ethics for a Secular Age.”

“We read the book, and that one offered moral guidelines without pushing for a concrete religion. In a way, the class was also an ethical class that went over how certain churches abused their power,” von Berg said.  Ultimately, Dr. Mitchell aims to promote the Holy Cross’ commitment with his course, which is “to provide educational opportunities for students of varied cultural, religious, educational and economic backgrounds.”

Perspectives on Atheism helps authenticate the St. Edward’s experience by supporting an inclusive and diverse curriculum.