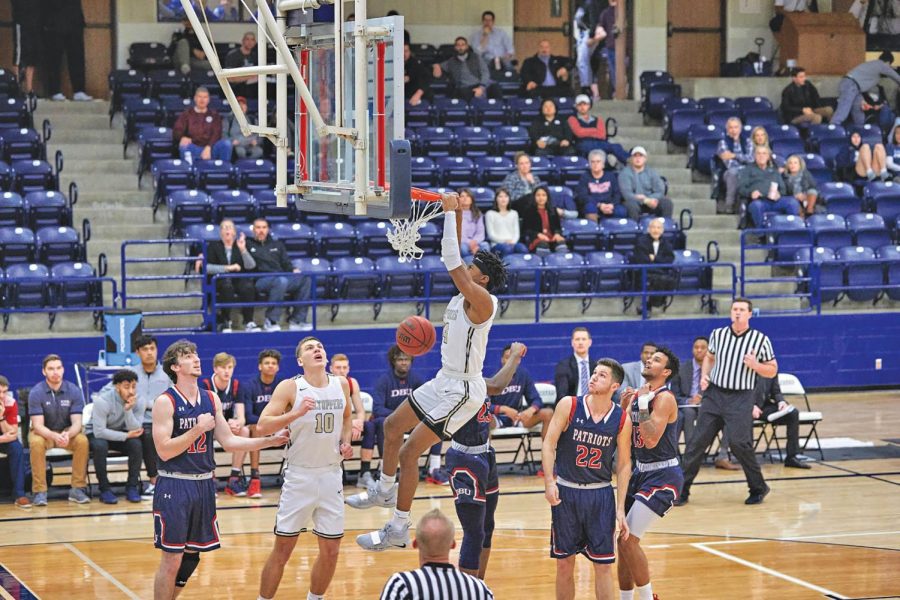 In his first year with SEU, Ashton Spears earned Heartland Conference Player of the Year. Spears ed the Hilltoppers in scoring.

“The adrenaline rush that you get when the fans are screaming when you got the ball in your hands and everyone is looking at you, it’s a feeling you just can’t really describe.”

Junior guard Ashton Spears was recently named Heartland Conference Player of the Year and Newcomer of the Year says that the indescribable feeling of playing for St. Edward’s  has strongly fueled his passion and love for the game.

With an extensive resume dating back to his high school days, the Louisiana native now adds to this honor to the long list of athletic achievements. Though he had to adapt to the big-city life, a new team and program also has its struggles. Spears says his successful transition is a result of head coach Andre Cook’s mentorship.

“When I came here, I wanted to get back to the feeling of being a champion again. That was my main goal, to just win. I will do anything it takes to win,” Spears says. “If it means scoring, rebounding or just playing defense, that’s what I want to do. At first, I kinda felt out of place but Coach Cook kept talking to me and giving me encouragement, the type of support that I needed to push through.”

Achieving his goal of being a champion once again, Spears ended the regular season averaging 19.2 points and 2.3 steals per game. The Jacksonville State transfer gives praise to something bigger than himself by highlighting his faith and the encouragement from his teammates and coaching staff as the cornerstone of his success this season.

“It means everything to me. I give praise to the most high for guiding me and giving me the abilities, but I also give credit to my coaches and teammates for supporting and believing in me.”

Teammate and Division I transfer August Haas has also compiled quite the resume this season, with Conference Co-Defensive Player of the Year being the highlight. A Copenhagen, Denmark native, Haas has excelled all over the world from Europe to Wisconsin and now to Texas. A polished veteran, the Danish point guard credits much of his defensive skills and passing abilities to his longevity in the game.

“As you grow older, the harder it is to score and the more you have to learn about the game. So, I had to slowly develop into this role that I have today. I really took the next step my freshman year at Univ. of Milwaukee, head coach Lavall Jordan really taught me how to be competitive, gritty and was more focused on the defensive end than anything.”

Haas and company held opponents to 43.2 percent from the floor and 32.5 percent from beyond the arc. Efficient on both ends of the court, Haas also led the conference in assist to turnover ratio at 2.4 this season.

“A lot of people talk about my assists, but it’s not an assist unless somebody hits the shot, so a lot of credit to those guys. I’ve always taken a lot of pride in defense. I think it has to do with me being competitive. I think that’s what being a defensive player is. You don’t have to be athletic or be 6’5” by competing and working hard anyone can be a good defender.”

Although basketball is not the sport of choice in Denmark, Haas’ love and dedication to the game has proven to be worthwhile as he has not only achieved his goals but thrived at the collegiate level.

“To play college basketball has always been a dream of mine, so I think I stuck around [basketball] because of all the new things that it constantly brought to my life. You got your boys, your team and you go up against a different team. The whole concept of always trying to come out on top is what makes [it] fun and challenging.”

Cook, who led two players to Player of the Year awards and three to All-Heartland team selections, also walked away with an award of his own. Cook earned the Heartland Conference Coach of the Year award, his first since arriving at St. Edward’s and his third since he began coaching at the collegiate level.

“It’s a great award. But to get it in front of your peers, the coaches, all of the Heartland and your team, to see them when you get the award and they are genuinely happy that’s a great feeling. I’ve always said, ‘nobody does it alone.’ It says ‘Coach of the Year’ but you need to have a good team and good people around. I’m happy to accept it but I’m accepting for all those other people.”

Cook has now been with the program for 10 seasons and, according to him, there is no telling when he will be ready to put down the coaching clipboard. Despite struggling in his first few seasons as a Hilltopper, Cook will now be leaving the Heartland as not only Conference Coach of the Year but also conference and tournament champion.

“When I was fourteen years old I said I wanted to teach and coach, and that was over 30 years ago. This is what I wanted to do. There is no end in sight for me. Personally, I remember those sleepless nights and to get to the mountain top of the Heartland and still have work to do nationally I’m very proud of all the people who had a hand in that.”

Cook ended the season with a 30-4 record and earned a spot in the South Central Sweet 16 game. Losing only one senior to graduation, Cook will have this season’s strong core back for next year.

Recruiting on the rise and transitioning to a new conference can always present some challenges, but with a veteran like Cook alongside a squad with studs all throughout the roster, it’s safe to say the future is bright for the men’s basketball program.