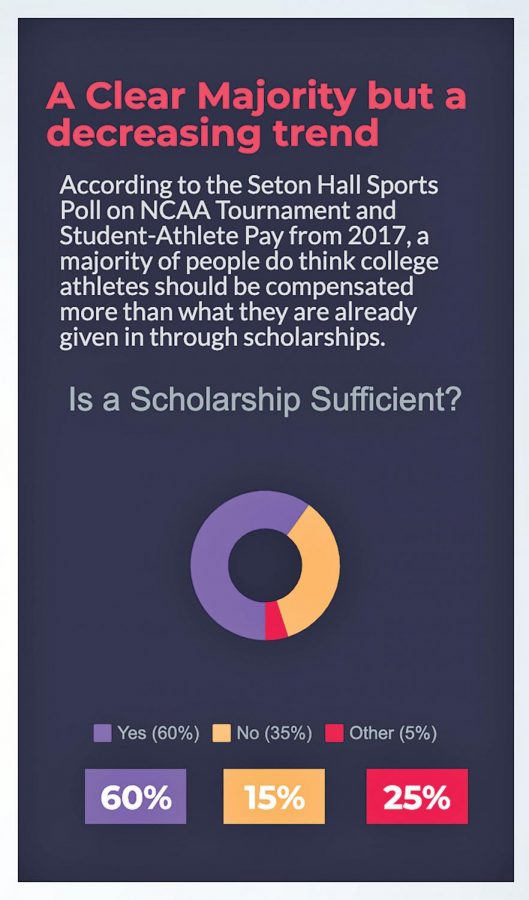 The general consensus believes that scholarships are sufficient for college athletes.

She decided that the NCAA can not use “amateurism rules” to bar colleges from compensating athletes for education-related expenses up to $5000.

College athletes already receive scholarships and get priority for registration. They should not receive more financial compensation than what they are already given because They should prioritize their studies.

This is a long standing debate. The recent ruling was not a complete success for the athletes who wanted to eliminate the cap on athlete compensation entirely, but it was a major step forward.

Each side of this debate has valid concerns. The NCAA is a nonprofit organization that regulates over 1000 schools in the United States. This organization emphasizes the fact that college sports are not professional, so paying college athletes removes the amateurism of college sports.

College athletes, however, see the large revenue that colleges earn from their games compared to the funds they receive that don’t cover all of their expenses.

Connor Morris, co-founder of Apex Sports, broke down the debate in a article last year. He said that the 2017 March Madness earned $70 million. This amounted to about $275,000 for each invited school.

According to a Seton Hall Sports Poll taken in 2017, 40 percent of people believe that athletes should be compensated beyond their scholarships. Although this is still the minority, this number has increased from previous years.

However, the NCAA does raise a fair point that has failed to be addressed. Who will determine how much each school is allowed to offer students and based off of what qualifications?

As a private institution, St. Edward’s University is not leading in sports. Where would our athletes stand in a decision like this? It is also important to recognize that not all sports earn equal revenue.

Football leads with an average revenue of over $30 million. SEU doesn’t have a football team. The University of Texas does, however.

College sports is a privilege given to passionate students. Being an athlete is not easy. Practices and games do take up a large part of their everyday lives. Still, they chose this path when they entered college.

The NCAA said that they wanted students to remember that they are students first and athletes second. Wilken did athletes around the country a huge favor in her decision.

According to Wilken’s ruling, other academic-related expenses include: “postgraduate scholarships, tutoring, study abroad, and computers and musical instruments.” This is more than the average student could ever dream of affording.

There are millions of students that have to work just as hard to get academic scholarships that won’t even cover their entire tuition. Even though full-ride sports scholarships are rare, they can greatly reduce the burden of tuition.

The NCAA is looking to appeal this decision. Judging by the growing support of athletes, it is hard to say if the appeal will succeed.

Athletes already benefit from the compensation they are given through scholarships for participating in sports they chose to join. However, changing this verdict will cause an uproar within the sports community so as of now, the ruling should stand.