Bipartisan bill would increase smoking, vaping age to 21 from 18 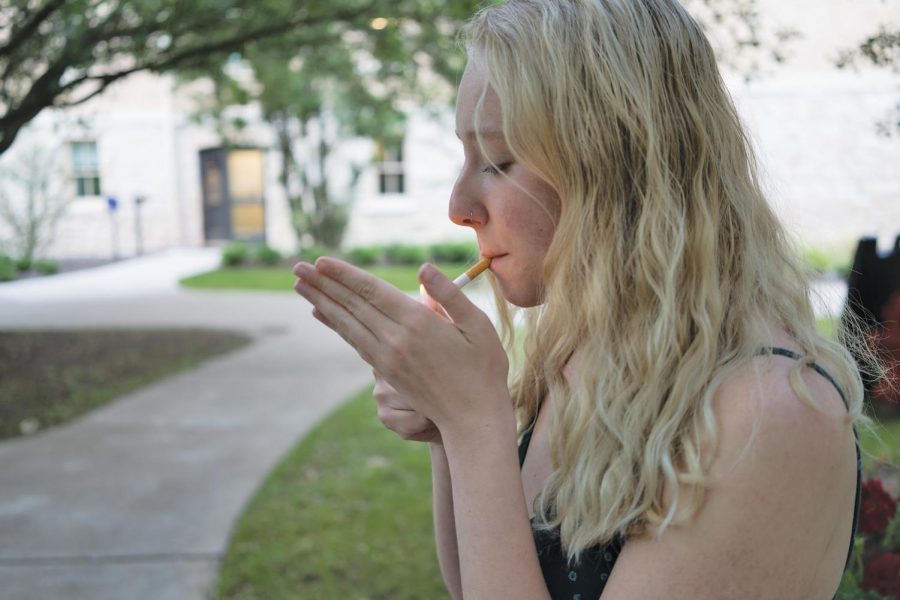 A student sits by the seal smoking a cigarette. A bill filed in the legislature seeks to reduce underage smoking by increasing the minimum legal age to purchase tobacco/vape products.

With more concerns about the impact of vaping on teenagers health, both federal and local governments are beginning to take action to prevent it.

In March of this year, House Bill 749 was filed in the Texas House of Representatives by Rep. John Zerwas.

The bill would raise the smoking age to 21 for all tobacco products including vaping devices such as Juul and Sorin.

The bill is similar to many filed around the country in a nationwide effort to crack down on nicotine addiction.

In January of 2018, San Antonio became the first city in Texas to raise the age from 18 to 21 for all tobacco products.

If this bill passes the Senate, Texas will become the eighth state to the legal tobacco age.

Since the rise of e-cigarettes, many think it apparent that raising the legal age limit for smoking is an effective strategy for deterring young people from using them simply because it’s more inconvenient.

“I think it’s a good move to help young kids avoid becoming addicted, if you really are willing to go through the trouble of having someone older buy it for you then good for you, but I think most people wouldn’t interested in dealing with this inconvenience,” student Hannah Garcia said.

However, many students who currently use nicotine vaping devices like Juul’s argue that the law would simply make the problem worse.

“I think it’s kinda dumb because in general with drugs you can get it no matter what. People are just gonna start paying more money to adults that will sell it,” Pedro Aizza said.

“I think in general it doesn’t change much teenagers are just gonna find different ways to get things like Juul pods.”

The link between vaping and tobacco use has prompted public health concerns in Texas and the nation in general.

“This is a simple bill, there’s been a recent push because 40% of all high schoolers now try tobacco. This is a huge spike in recent years people predict there’s going to be a lot of health issues concerning it,” Cody Nguyen, an employee of Representative Hubert Vo, said. Vo was among the first representatives to sign on to support the bill.

Nguyen went on to explain that many representatives in both parties in this year’s legislative session were quick in deciding to support the bill.

“It’s not too controversial because most people involved in Texas politics on both sides view it as common sense. There’s been concern about younger teenagers who’re getting addicted to nicotine early on thanks to vapes I think it’s a good objective to attempt to prevent it,” Nguyen said.

Governor Greg Abbott’s office declined to comment on whether he would sign the bill if it passes through the Senate.

One argument against the bill is that this law would be an overreach by the government to control what citizens can and cannot do.