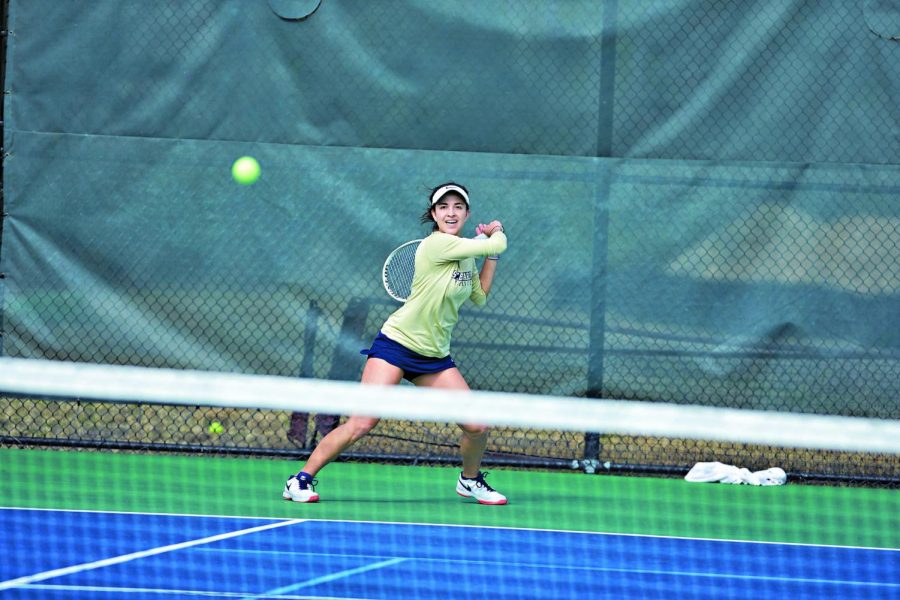 Pao Carpio left her mark on the women’s tennis program as her athletic legacy led to national recognition.

Paola Caprio, alumna of the St. Edward’s University women’s tennis team, was recently awarded the Intercollegiate Tennis Association Arthur Ashe Jr. Leadership and Sportsmanship Award. This prestigious award, presented monthly to only ten tennis players, is one of the highest honors at the intercollegiate level.

“It was so much more than what I expected it to be,” Carpio says about the award ceremony. “What’s great about the award is that the ITA goes above and beyond to make this award not just about taking you to New York and getting this award, but also something that has to do with the volunteering aspect as well.”

While in New York, Carpio says that she and other honorees volunteered at the U.S Open Tennis tournament and helped out a community in the Bronx to give children the opportunity to play collegiate tennis.

Although Pao is a decorated college tennis player, she had a hard time adjusting when entering SEU as a freshman. The result of this struggle was seen clearly during her first season.

“Coming in as a freshman from another country [El Salvador] and trying to adjust to the differences did make it harder for her. She wasn’t on the line up as much her freshman year and I think that really motivated her to put in the work over the summer … and I think that speaks to the type of person she is,” Brooks said.

Not only has this award had an impact on Caprio’s personally, but also on her former teammates. Sophomore Kate Malazonia describes the impression Carpio left on her during her time at SEU. “She’s a very driven person. Just from seeing that my freshman year at St. Edward’s is so inspirational. That’s what I want to be.”

Malazonia looks up to Caprio’s dedication and ambition, but also admires her kindness. “Bonding with the team, talking to them … all the things that Pao did last year with me and Loli [Perim].”

When asked about the upcoming women’s tennis season, Malazonia shared her optimistic expectations for what the program has in store.“[I’m] looking forward to seeing the kind of player everyone is, how we’re going to support each other, figuring out our doubles pairs and just building our confidence as we’re going into next season,” she said.

Coach Brooks shared her thoughts as well, especially with a majority of the team being composed of freshman.

“My expectation is that it’ll be a growing season. We have four freshmen, which is over half the team. The talent that they have is at a good level, but they obviously don’t have the experience as the five seniors that graduated had, so I know it’s gonna take time.”