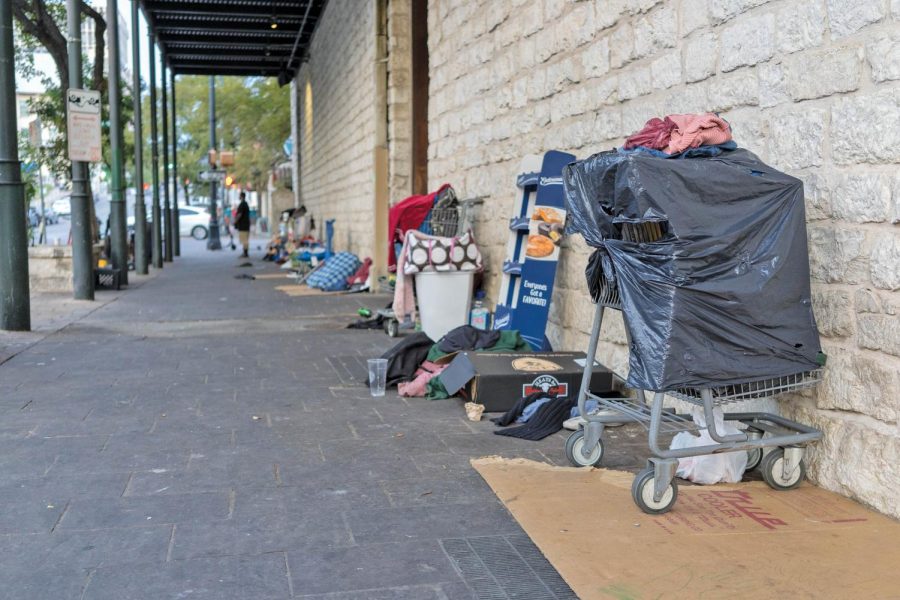 Many homeless encampments, such as this one on Trinity and 6th Street, are located in Downtown Austin. The city’s homeless population has grown 28.2% from 2013 to 2018.

Camping tents line the underpass at I-35 and Cesar Chaves in downtown Austin, a city with a growing population of approximately 950 thousand residents, and a homeless population that is growing even more rapidly.

According to KVUE, “Austin’s homeless population is not only growing, but at a faster rate than our overall population.”

In June, the Austin City Council voted to repeal an ordinance that criminalized public camping, making it legal for the city’s homeless population to camp in public areas.

Behavioral Neuroscience major Rosa Perez has called Austin home for the past 14 years, arriving to East Austin from Chicago with her family in 2005. She says she began to notice changes in Austin’s homeless population in 2010.

“I noticed I was seeing more homeless people downtown, specifically near I-35 and Cesar Chavez,” Perez says.

But Austin isn’t the only city that is experiencing an upsurgence in homeless populations.

According to City Lab, San Francisco Mayor London Breed says that she’d “welcome more federal support” when it comes to providing resources for the city’s homeless population, such as navigation centers, affordable housing and supportive housing.

Breed said this in response to President Trump’s recent plans to “crack down” on homelessness in California, which includes a plan to raze, or completely destroy homeless encampments.

In a statement to City Lab, Breed said, “Simply cracking down on homelessness without providing the housing that people need is not a real solution and will likely only make the situation worse.”

Back in Texas, lawmakers are facing pressure to find solutions to the Austin homelessness crisis.

In the past few weeks, Gov. Greg Abbott has sent two letters to Austin Mayor Steve Adler, giving him an ultimatum to reinforce the city ordinance that criminalizes camping in public areas by Nov. 1.

Abbott has also taken to Twitter to urge Austin residents to post photos and videos of homeless people camping publicly.

He commented on one video of a homeless man allegedly attacking a man downtown, saying “allowing the homeless to do whatever they want” is “bad for Austin.”

Perez said that she doesn’t agree with how Gov. Abbott is responding to the city’s homelessness crisis.

“I disagree with the way Abbott is using his political platform and popularity to create more antagonizing associations with homelessness,” Perez said. “Instead of addressing the positive effects of allowing homeless people to camp in public, he instantly ties homeless people to violence.”

Perez added that Abbott’s phrasing of his tweet — saying that Austin allows the homeless to “do whatever they want” — is “a clear hyperbole.”

“No ban could ever stop anyone from doing anything, so even if a person who might be homeless is already violent, a ban wouldn’t change that,” Perez said.