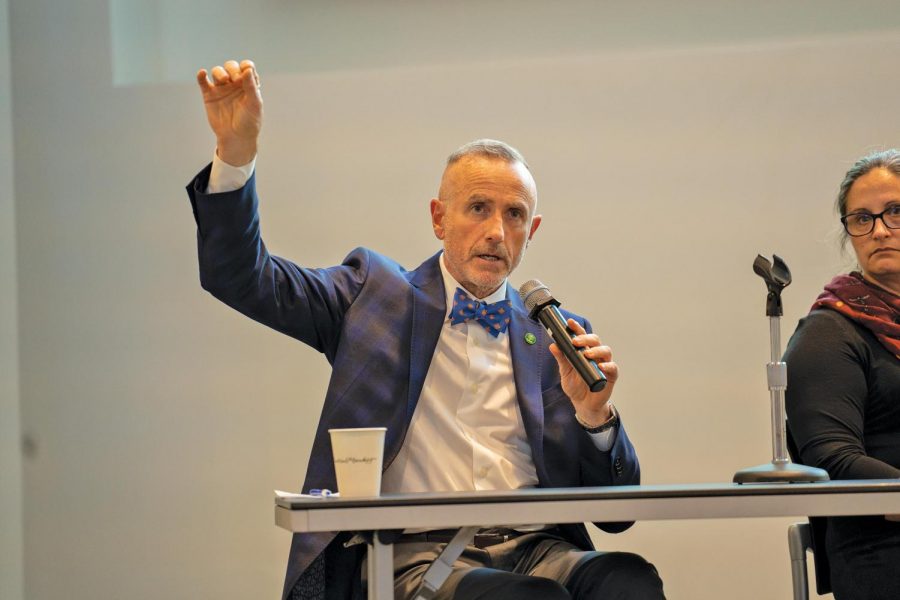 Dr. Robert Buchanan speaks to students in Jones Auditorium during a pnael discussion. Buchanan works with advising the Vatican in matters regarding science and religion.

The Institute for Interdisciplinary Science (i4) and the Center for Ethics and Leadership (CEL) hosted a screening of “Human Nature,” on Nov. 7. “Human Nature” chronicles the founding of clustered regularly interspaced short palindromic repeats, or CRISPr, a family of DNA sequences found within bacteria. The film discusses the upsides, downsides and concerns of CRISPr’s impact on the world.

Prior to the documentary screening, Raychelle Burks, PhD awarded certificates to i4 interns, scholars and innovators at St. Edward’s. Burks, assistant chemistry professor in the school of natural sciences, launched the screening, saying, “Science is always in context. We must ask what is it good for, what are we using it for and what are its limits.”

“Human Nature,” directed by Adam Bolt, began by covering the daily routine of 15-year-old David Sanchez, who suffers from sickle-cell anemia and is currently undergoing treatment at Stanford’s Children’s Hospital in Palo Alto, CA. The film follows Sanchez’s life, both in the hospital with his family and hanging out with his friends.

Sickle cell anemia, called the first molecular disease, is caused by a single change in the molecular sequence that causes red blood cells to collapse.

Matt Portues, who researches sickle cell disease at Stanford University, found the U.S. is well ahead in research technologies for the disease compared to other countries. Africa’s survival age for sickle cell ranges from five to eight years, while in America, one can survive well into their mid-40s with the disease.

Bioethicists at the University of Madison in Wisconsin, Alta Charo, Bernard D. Davis, Fyodor Urnov and Feng Zheng, comment on their research in reference to using CRISPr as a cure for sickle cell and toward all gene therapy.

Jennifer Dounda, a biochemist at UC Berkeley, shares her research on the protein Cas-9 (SpCas9). This protein has a powerful ability to defend certain bacteria against DNA viruses.

“CAS-9 is a tool not only to change our relationship with nature, but to change human evolution,” Dounda said.

The main concern proposed in the film is making a child would become more of a pick-and-choose process, in hopes of making the happiest, healthiest and most unflawed human.

While CRISPr could potentially save lives and cure diseases, many are concerned of the hubris involved when using the tool to alter the next human generation. To comment on the ethics behind the tool, the editors-in-chief of Hilltop Views shared questions from i4 students with a panel of professionals.

Buchanan believes that in order to make this decision, we must ask ourselves “Do these modifications lead us back to God? Do [these technologies] help us with the master plan to get back to heaven?”

As for who gets a say in gene-editing the next generation, Dr. Goering believes that that generation itself should get to choose.

“Who gets to make those decisions? There are so many questions there, true to any sort of selection,” she said.

While fearful too many people would shy away from the idea due to fear, Dr. Taylor shared his personal view.

“For therapeutics or enhancements? I don’t believe in enhancements,” he said. “Edits? Okay, but as long as it’s treating some disease to make their [the patients] life better.”