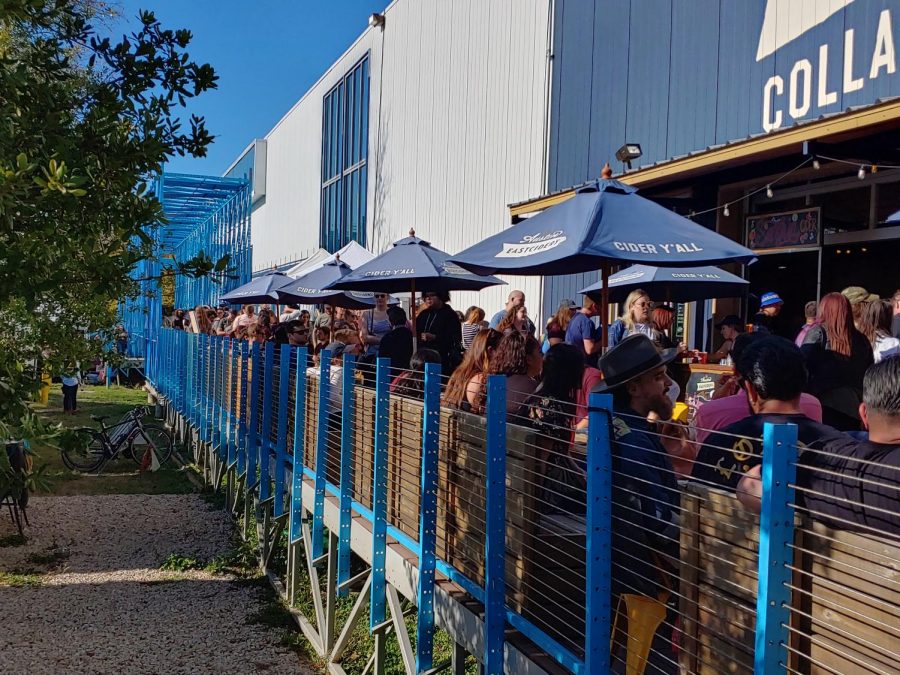 Austinites lined up around the building to get a taste of the new Sangria flavor from Austin Eastciders. Pick a six pack up at a store near you.

It felt too hot for a late November day. The traffic was harsh and uninspiring, and to top it off, it took a good 15 minutes circling the parking lot before being able to disembark.

Sometimes, it seems you have to suffer just a little bit before you can really start to enjoy yourself. At the launch party for the latest seasonal brew from local cider makers Austin Eastciders, the atmosphere, cider and people made up for all prior annoyances.

About 12 or so minutes from the St. Edward’s campus, Austin Eastciders operates their taproom, known as the Austin Eastciders Collaboratory. On most days it functions as most taprooms do, allowing people the chance to taste the different brews being made, and giving them a relaxed space to hang out. However, the sangria launch day was different, and the taproom had a totally different feel.

In conjunction with the launch party, Austin Flea was hosting one of its pop-up markets. Long lines of people waiting to get into the taproom were able to browse the tables as they marched on. Being able to do something besides browsing social media while waiting was a breath of fresh air.

Suddenly, it no longer felt like a hot, crowded day in late November. Instead, it felt like an early day in May with everyone gathered at the park with their dogs and some beer (or ciders. That’s a pretty good atmosphere to have when selling a more summer-y drink like sangria.

Once in the crowded taproom, the sound of a live Flamenco guitarist echoed throughout. A lone man hard at work behind a small table gave out free churros paired with a sweet sauce based off of the new sangria cider to everyone who asked. Oh, and about that cider: it was definitely worth the wait.

When poured, it has a gorgeous reddish tone with a thin, fizzy head typical of ciders. The smell is extremely fruity, but not overwhelmingly sweet. It’s closer to the way a fruited sour beer smells than a typical fruit drink. While they describe the sangria cider as being on the drier side, I would say it falls slightly closer to sweet, especially when compared to some of their dry ciders such as their wonderful Rosé cider. Additionally, the cider was very versatile, lending itself well to a sipping drink while also being enjoyable in, shall we say, larger quantities.

The crew at Austin Eastciders did a wonderful job translating the flavor of sangria into a cider. The fruit flavors are complex, strong and held the front lines while the beer-like flavor of ciders took a backseat, only peeking out enough to remind that it isn’t wine you’re drinking. To compare it to other Eastciders flavors, it’s not as overwhelmingly sweet as the Texas Honey cider, not a dry as the Rosé, but a smidge drier than the Blood Orange. Sangria cider definitely has me feeling summer vibes in November.