Black History Month: Jim Brown broke tackles on and off the field during Civil Rights Movement 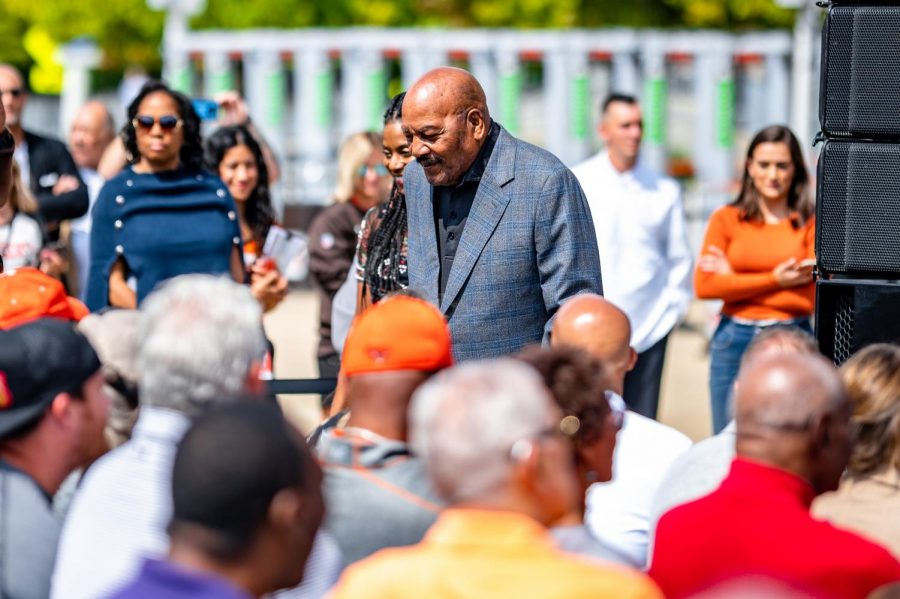 NFL legend Jim Brown is one of the most storied running backs in league history. Brown sits sixth all-time in rushing touchdowns with 106 and has earned three MVPs.

This past November, Brown was the first former player unanimously voted into the NFL All-Time Team. The honorary team was part of the NFL’s centennial celebration and recognized players and coaches who comprise the NFL family and who have helped build the NFL into what it is today.

While at Syracuse, Brown earned All-American honors in football and lacrosse and was one of the basketball team’s top scorers. He even finished fifth in the college decathlon.

Eventually, Brown decided to focus on football, and began his NFL career in 1957 with the Cleveland Browns. Taking advantage of his well-rounded athletic abilities, Brown was able to quickly adapt to the NFL. According to the NFL, Brown averaged 100 yards per game and is still the only player to lead the league in rushing eight times.

Yes, it is worth recognizing Brown’s exceptional dominance on the gridiron, but this is not why he is being featured, nor is it his most impressive feat. Brown played during the Civil Rights movement. During these tumultuous times, African-Americans were fighting against the heinous aftermath of the Civil War: racism and discrimination.

While Brown played collegiately in New York and professionally in Ohio, both northern states who didn’t officially adopt the infamous Jim Crow laws, African-Americans still experienced daily discrimination at their jobs, when trying to buy a house or even when getting an education, according to history.com.

It’s difficult to imagine the adversity that Brown faced every time he stepped on the gridiron. While the obstacles he faced aren’t as heavily documented as those that Jackie Robinson faced, it would be naive to think that Brown faced no adversity as a black football player during the 1960s. After all, the NFL, like other American professional leagues during that time, was dominated by white people.

Ironically, I was introduced to Brown through film. “The Express” (2008) focuses on the relationship of Ernie Davis (1939-1963), a gifted African-American athlete, and his coach at Syracuse University, Ben Schwartzwalder (1909-1993). In the film, Brown’s character played by Darrin Henson, helps Schwartzwalder (Dennis Quaid) recruit Davis to Syracuse.

During a time when African Americans were severely oppressed, Brown broke through the barriers of discrimination to become the best running back in the league and universally accepted as the greatest running back to ever play in the NFL.