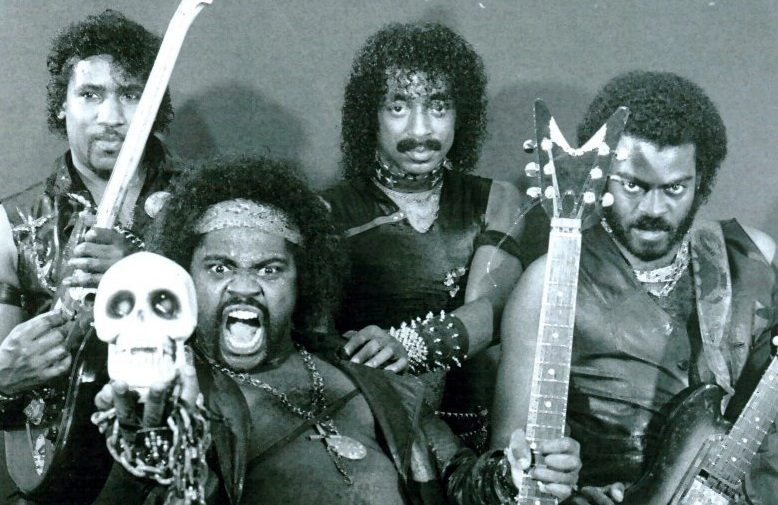 Frontman of Black Death, Siki Spacek (bottom left), has been working on his comeback album, 'Return of the Iron Messiah,' for Black Death Resurgence since 1983.

Most have heard of iconic metal legends such as Judas Priest, Iron Maiden, Motorhead and Ozzy Osbourne. However, what many die-hard fans don’t realize is that there are certain bands throughout heavy metal history that haven’t received as much attention.

I would like to take this opportunity during Black History Month to present the history of the very first heavy metal band with an all Black line-up, Black Death.

Originating in Cleveland, Ohio, Black Death formed in 1977, comprised of guitarist Greg Hicks, drummer Phil Bullard and bassist Clayborn Pinkins. Electrifying frontman Siki Spacek (also known as Reginal Gamble) came into the lineup as the vocalist and accompanying guitarist later after a year of the band being unable to hire a quality singer.

Despite gathering its members, the band at the time hadn’t even thought of a name, and it wasn’t until two years after their formation that both Hicks and Pinkins settled on “Black Death.”

Unfortunately, one of the group’s original members, Pinkins, was tragically shot in 1979 before he could witness the evolution of the band he helped spawn. The band eventually added bassist Darrell Harris as Pinkin’s indefinite successor.

After the release of three demos from 1981 to 1983, Spacek, Hicks and the gang decided that it was about time to unleash their very first — and unfortunately only — full length, self-titled album.

Lyrically, the band wanted to incorporate themes related to the topics of love, heavy metal, death and Armageddon, which, funnily enough, makes sense given that the band released this rip-roaring monster of an album on Halloween in 1984.

As covered by Hells Headbangers, Spacek and the gang wanted to create the ultimate heavy metal band that was able to cover a spectrum of emotions that artists like Hendrix and Black Sabbath had done in their own ways. When asked about how race and culture played a part of being an all Black heavy metal band, Spacek stated that it wasn’t a predetermined thing. To them, being a heavy metal band was all that mattered, and being Black was just a natural aspect of who they were as a band.

Soon after the band issued its debut, Black Death went on hiatus from 1988 to 2009 and ended up canceling plans to announce a second full-length album. During the band’s two-decade-long intermission, Bullard passed away from colon cancer in 2008.

It wasn’t long before Spacek and Hicks split and reformed the band into two individual groups. Hick’s side of Black Death wasn’t able to provide an album, ultimately leading to his band disbanding.

However, Spacek’s version of the band, Siki Spacek and the Resurrected (which later turned into Black Death Resurrected) cranked out a demo and a full-length album titled “The Resurrection of the Iron Messiah” in 2015, under the Word War record company. Spacek kept the name “resurrected” next to his band in honor of Bullard, who invented the name. They are still active to this day.