Homecoming Bash kicks off alumni and family weekend at SEU 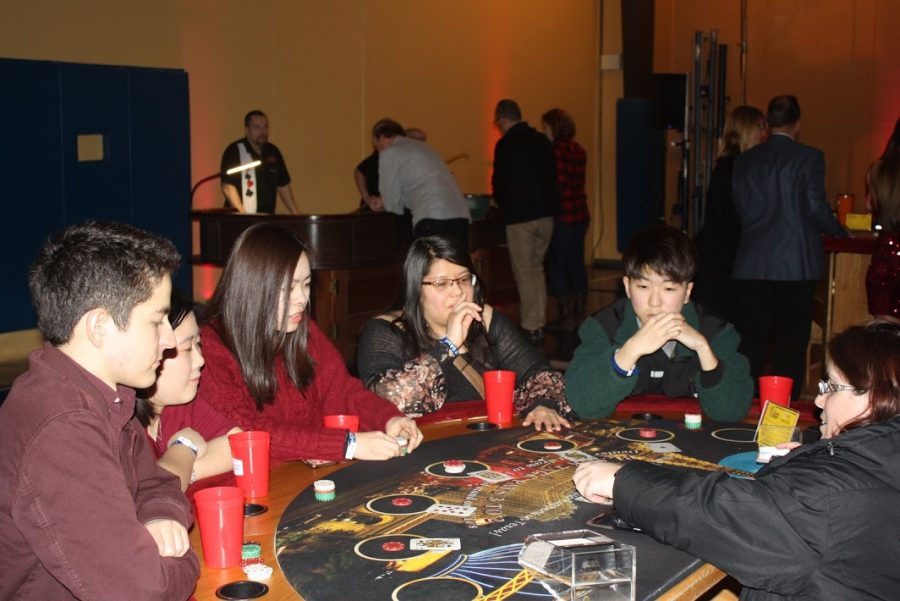 A visiting family plays blackjack at the casino section of the Homecoming Bash. Guests could trade in tokens won during gambling for raffle tickets for a chance to win prizes such as AirPods, a FitBit and more.

From Feb. 14 through Feb. 16, St. Edward’s University celebrated its annual Homecoming And Family Weekend with alumni and families of the St. Edward’s community.

One of the scheduled events was, what used to be Casino Night and is now referred to as the Homecoming Bash. From 8pm to 11pm, the St. Edward’s community gathered to celebrate the school with food, music, dancing and an honoring of Topper Cup winners and the Homecoming Court.

Valentine’s Day marked this St. Edward’s tradition, hosted at the Austin Sports Center across the street from campus on Woodward. At the venue, the upstairs area served as an open-bar while downstairs split the dance floor and casino tables.

The Homecoming Court was acknowledged around 9:30 pm. Seniors Sydney Wade and Christopher Ayala were crowned the Homecoming Royals. Along with Ayala and Wade, seniors Lexie Elliot, Luke Markley, Jeweliana Molinas and Sarah Wassef made up the Royal Court. Also present were the members of the Noble Court: junior Joy Ambrose and freshmen Audrey Griffin, Natalie Hughes and Jackson Lundquest.

In the corner of the room, guests could pose for photos in a photo booth to take pictures with family and friends. The booth also allowed users to choose how many prints they wanted.

To feed the guests was a nacho bar by Bon Appetit and a “Design Your Own Cupcake” bar.

Throughout the week leading up to the Homecoming Bash, the St. Edward’s community offered a Topper Cup, a week-long series of events where students could form teams to compete to be the winners of the cup.

Topper Cup Events included board painting, a triathlon in the new Recreation and Athletics Center, a dodgeball tournament and themed dress-up days throughout the week. Students could compete all week in an effort to score as many points as possible.

Announcements throughout the night named the four out of 21 teams who won the Topper Cup Competition. The overall champion was team Ball So Hard, which included two of the Royal Court members, Christopher Ayala and Lexie Elliot. Team Scooby Snacks won the Residence Hall Cup, while The Scapegoats took home the Funshine Cup. The Student Organization Cup was awarded to the Forensic Association Committed to Truth (FACT).

The Homecoming Bash was just the start of the weekend. On schedule for the rest of the weekend was a family and alumni tailgate, followed by various showings of the Mary Moody Northen Theatre’s production of The Curious Case of the Dog in the Nighttime. On Sunday, the closing day of Homecoming Week ended with a family and alumni mass in the Alumni Gym, a brunch and the Spring Ring Ceremony where seniors could receive their class rings.