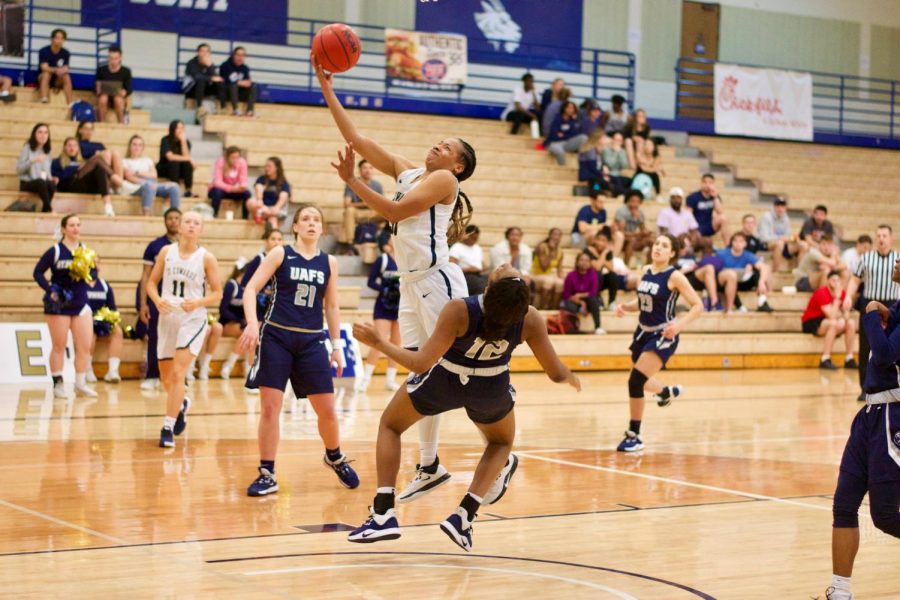 Deijah Blanks (in white) draws sooting foul off of UAFS defender. The Hilltopers finished the regular season 13-9 in conference play.

In the first round of the Lone Star Conference Tournament, the St. Edward’s Hilltoppers defeated the University of Arkansas Fort Smith Lions by a score of 78-59 Tuesday night. SEU forward Deijah Blanks led St. Edward’s with 30 points, eight rebounds and three steals

“My teammates usually find me in the right spot at the right time. We move the ball very well, that opens me up to getting wide-open lanes and wide open drives,” Blanks says.

The first game of the Lone Star Conference tournament for the Hilltoppers was defined by their ferocious defense. The Hilltoppers kept UAFS’ best scorer of the night, Tamera Gulley, to 15 points and eight rebounds.

Hilltoppers head coach JJ Riehl says, “I think you just saw that our defense was just really good and we just wore fort smith down.”

“I think we buckled down on defense. We got kind of sloppy, we got kind of complacent with a four to six-point lead,” Blanks says.

Riehl, who’s often a motivating factor to the team, kept the message short and games focused.

“I mean, I wish I can take credit. I don’t really think I said anything. I think it’s just more them, Riehl says. “I think we really try to keep things simple and we really try to talk about the fundamentals of the defense that we play and we don’t change things from game to game.”

The big factor in tonight’s game was the turnover battle. The Hilltoppers scored 28 of their 78 points off turnovers. Just part of the dominant defensive showing from St. Edward’s in tonight’s game.

On offense, senior guard Lexi Cunningham came off the bench to fulfill her scoring duties. She finished with 13 points on 60%  3-point shooting. Sophomore guard Haley Blankinship was also a key piece in the team’s victory as she scored 14 points while shooting 55% from the field. Blankenship ended the game with a game-high five steals.

As the Hilltoppers move on in the Lone Star Conference Tournament, they face No. 2 seed West Texas A&M on Thursday. West Texas A&M received a first-round bye and will be a formidable opponent for the Hilltoppers. If they stick to there tough defense in the rest of the tournament they are sure to make a deep run.

“I think as a collective our team is just ready to keep our foot on the gas. We finally reach the point where we learned how to piece games together, so I think that is going to carry over in the tournament,” Blanks says.

With the win, the Hilltoppers (18-10) advance to the LSC Tournament quarterfinals and will face No. 2 West Texas A&M on March 5 in Frisco, Texas.