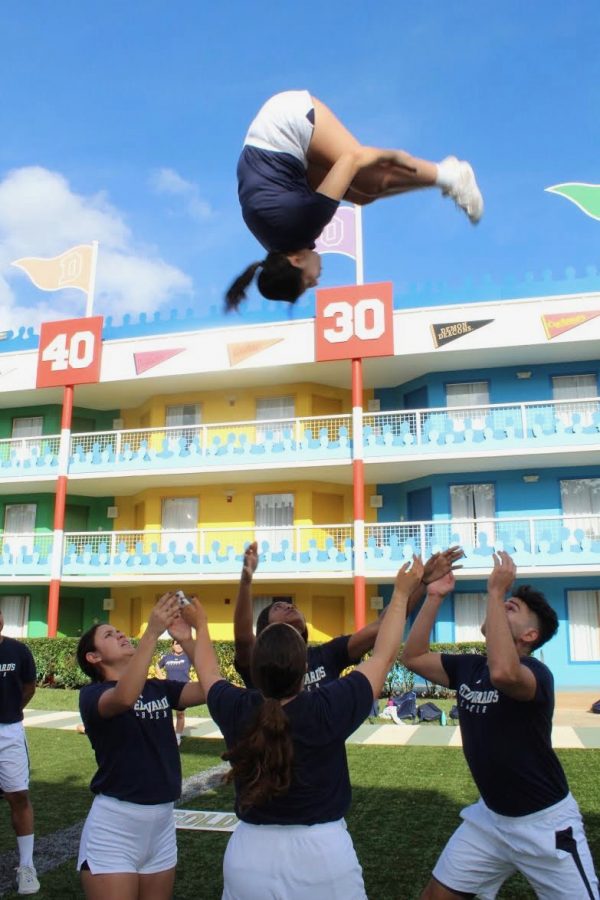 In January, the SEU cheer squad finished in ninth place at the UCA College Cheerleading National Championship. The competition took place in Orlando, where they earned a zero deduction

Cheerleading is a physically and mentally trying sport that most people tend to overlook. But during March, National Cheerleading Safety Month, cheerleaders are taking the opportunity to spread awareness on safety in cheerleading.

The St. Edward’s University cheer team is classified as a Division II Small Coed cheerleading team, but that doesn’t make them different from any other college-level teams. Cheerleaders all follow the same rules and structures that are meant to keep them from getting injured.

Though sophomore psychology major Lavelle Brown is new to the SEU cheer team, he says that one thing he’s known since the beginning is “safety is more important than hitting your stunts.”

But even when injuries happen, the show must go on.

“It is not just possible to perform with a cheerleading injury, it is expected,” Malone said.

Even when cheerleaders are doing everything they can to prevent injuries, they can still happen.

“Going to practice you expect to get hit at some point. It is very rare to hit a new skill on the first attempt, so there will definitely be falls along the journey of perfecting a new skill. Cheerleading requires thick skin,” Malone said.

Malone recalled a time she was injured with a dislocated finger during the sport.

“My doctor highly recommended that I not cheer because of my injury. He warned that if I kept practicing, I would be in extreme pain. I knew I would endure any pain for the benefit of my team. I taped my finger up and kept practicing despite needing to use my hand in every skill,” Malone said.

Malone’s teammates have performed with injuries like broken ankles and torn ACLs.

Despite the common presence of injuries in cheerleading, SEU head coach Talia Russell says that she constantly reminds her team of safety rules and regulations.

Russell also said she ensures her own first aid training is up to date and that her cheerleaders have access to an athletic trainer who can help keep minor injuries from turning into major ones.

Another reminder of safety in cheerleading is from the Netflix show “Cheer,” which centers around the Navarro College cheerleading team in Corsicana, Texas. The show chronicles the team’s preparation for the NCA College Nationals in Daytona Beach, Florida.

Through putting the spotlight on a highly successful cheerleading team, the series shows the hard work and pressure that comes with preparing for a challenging competition.

According to Malone, the team watched the first episode of the series together and appreciated how it shed light on cheerleading as a sport.

“I was so excited about the show because it allowed people not familiar with the cheer world to have a close look at what happens during a typical practice,” Malone said.

Malone highlighted how cheer is often overlooked, and the show broke some stereotypes or misconceptions about cheerleading.

“The majority of people do not see the intensive skills we do at competition. They just see game day or think we “just shake our poms” on the sideline. Cheer is more than that. We do basket tosses, elite stunts, pyramids and tumble. These skills are difficult and injuries do occur,” Malone said.

Tryouts for the St. Edward’s University Cheer Team are in late April. Those interested in trying out can register here.