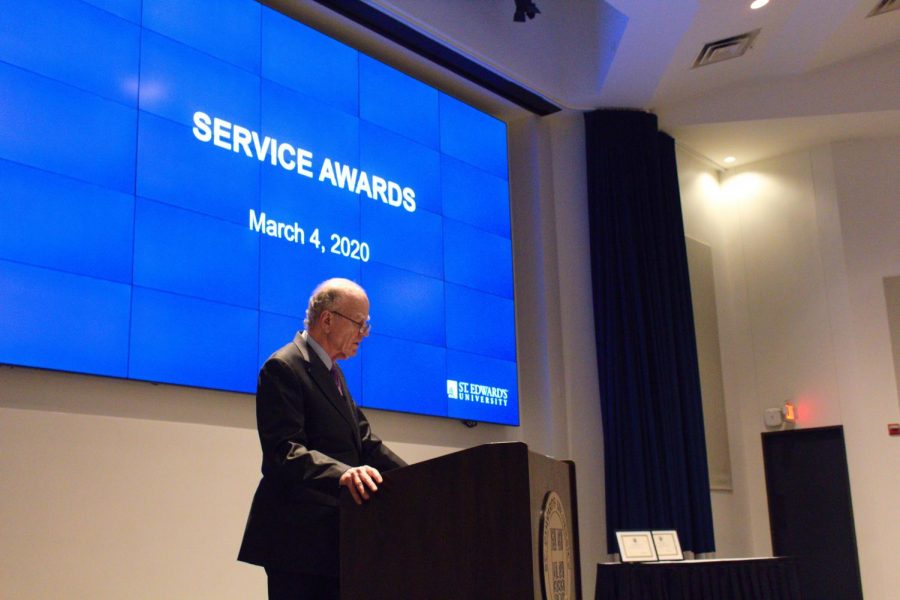 During the annual President's Meeting, the university president addresses the St. Edward's faculty and staff about the state of the campus. The meeting also included service awards given to faculty and staff.

President Martin addressed low enrollment and other university challenges and accomplishments at the annual President’s Meeting and Service Awards on March 4.

Enrollment at private institutions is down by 60%, which is something that can put a dent in revenue.

Martin said that low enrollment could be due to the fact that Texas is a ‘public-first’ state. This means that students enrolling in college in Texas tend to enroll in public universities more than private institutions.

According to Martin, enrollment at St. Edward’s peaked in 2010 and has steadily declined for the past decade.

Another cause of low enrollment is that high school counselors don’t tend to recommend private institutions because they are not aware of them, according to Martin.

A factor in low retainment was due to students taking dual credit, AP and IB courses in high school. Martin says these credits allow students to graduate with their bachelor’s degree in two years as opposed to four.

Martin said that the only way to overcome these challenges is to adopt strategies to make St. Edward’s more “resilient and antifragile.”

He says that the schools that are able to adjust are the “institutions that survive.”

Apart from being aware of the challenges that the university is facing, Martin said the university plans to bring in income that is not dependent on enrollment, such as using the El Gallo property that the school purchased last year, and to purchase a long-term lease on the I-35 property.

Another solution that the school plans to implement is to create more academic programs, which they hope will make the university more favorable among prospective students.

Currently, the administration is working on a budget to present to the Board of Trustees in May, which is expected to reduce expenses by $2.5 million.
Accomplishments
Service awards

Several faculty and staff members who have been employees at St. Edward’s for over 20 years were honored during the President’s Meeting.

Laura Baker is the Chair of the Department of Computer Science and has dedicated 30 years of service to St. Edward’s.

Peter Beilharz is the university bursar and helped SEU become one of the first universities to go paperless, primarily with Student Financial Services, when student documents began to be filed online.

Nicolas Delgado is a sergeant for the University Police Department, affectionately known as the “Mayor of St. Edward’s.” Delgado was a member of the College Assistant Migrant Program (CAMP) and worked full time while in college. He has served 30 years at St. Edward’s.

Alan Swinkels, psychology professor and Chair of the Department of Psychology, has written a variety of psychology textbooks used in the U.S. and abroad. He was the first professor at St. Edward’s to receive the Texas Professor of the Year award, given by the Carnegie Foundation.

On the athletics side, St. Edward’s was honored with the NCAA President’s Award for Academic Excellence as the only Division II school honored in Texas. Ashton Spears, a member of the men’s basketball team, was individually recognized for being on the Bevo Francis Award Watch List, which recognized 100 players from Divisions II, III, NAIA, USCAA and NCCAA men’s basketball.

As far as alumni, Martin emphasized that top graduate schools such as Harvard, Cambridge, Columbia and others accept St. Edward’s students into their prestigious and competitive graduate programs.

Among the accomplishments mentioned at the meeting, Martin recalled St. Edward’s No. 8 ranking of Regional Universities in the West from last semester.

Martin concluded the night by discussing upcoming milestone events at St. Edward’s, such as the dedication ceremony of the new Brothers of Holy Cross Garden on March 27. Also mentioned were the 16th annual Big Event on Sat. April 18, and the Spring 2020 Commencement Ceremony on Sat. May 9, where former United States Secretary of State (1997-2001) Madeleine Albright will speak to the graduating class of 2020.