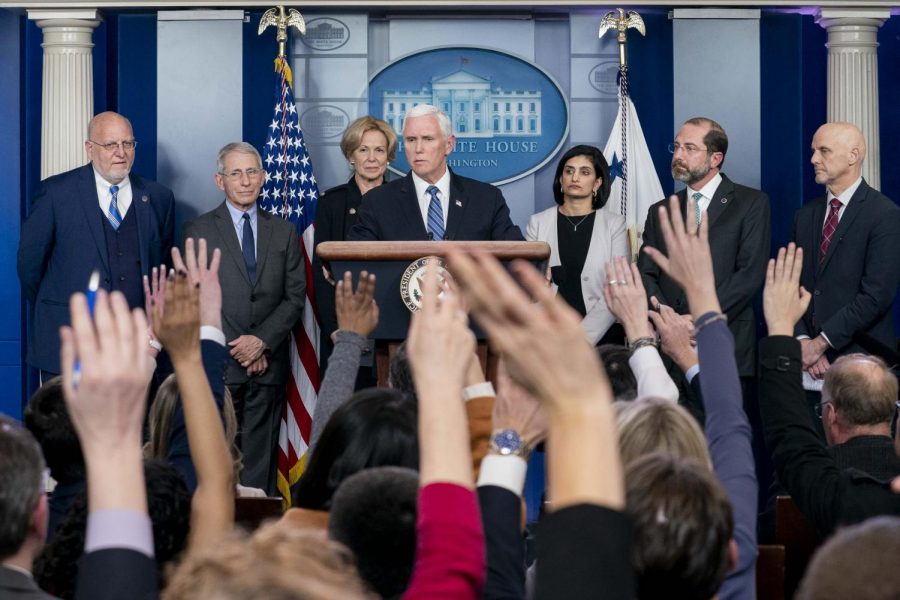 At a press briefing on March 15 Vice President Mike Pence addressed updates and concerns over the coronavirus after an estimated 700 cases and over 70 fatalities from the disease have been confirmed.. Trump began by applauding the Federal Reserve on lowering the interest rate below the benchmark. He then left after that statement, saying he needed to make calls on Wall Street to congratulate them, and handed the briefing over to Pence.

“We are using the full power of the federal government to defeat the virus, we’re learning from watching other countries. It is a very contagious virus, it’s incredible,” Trump said. ”Please buy less, take it easy. It will all pass. Your local grocery stores will be opened, supplied. We are encouraged to tell Americans to buy only your weekly groceries,” Trump said after a talk with supermarket CEOs.

Last week, President Trump announced that Medicare and Medicaid programs will now have testing included, even for the uninsured. This legislation will be considered by the senate later this week.

“The risk of serious illness remains low, but the risk is heavily weighted to the most vulnerable,” Pence said. “Our admin and state admin will continue to urge every American to be vigilant in practicing good hygiene and taking the advice of the CDC.”

Assistant Secretary for Health Admiral Brett Giroir gave a set of principles that should be followed when it comes to coronavirus testing..

(1) Those most vulnerable and most impacted are able to be prioritized.

(2) We don’t want to do testing that in anway threatens the acute care system, which means going to hospitals where others are at risk.

Admiral Giroir shared the new phase of testing the U.S. has now entered. The Public Health Service Commissioned Corps and FEMA are working together to implement the new testing regime. The testing pods, which range from a drive-thru system, to walk-in clinics, potentially in Walmarts and Walgreens can “test hundreds of thousands of individuals per week,” Giroir said. There will be 1.9 million tests available throughout multiple labs this week.

With help from FEMA, all 50 states are on track with the plan. Since every state is in a different situation, those who have been hit the hardest, or are at risk of being hit with COVID-19 cases, will have the pods implemented first. Each pod-based unit can screen two to four thousand individuals. Those prioritized for the testing are healthcare workers and first responders. Those 65 and older with a cough and a fever of 99.6%, will be tested and treated first.

“This is not make-believe, this is not fantasy. We will start shipping gear and deploying officers tomorrow,” Giroir said.

In terms of locating and accessing these sites, Pence announced the cooperation with Google to have a website running to make sure “there are online resources where people will be able to readily access a questionnaire that will walk them through the symptoms and whether or not a test might be indicated.”

The Response Coordinator for the White House Coronavirus Task Force, Dr. Deborah Birx, explained what testing would be like.

“We’re making sure that the reporting is available to you, your doctor and state,local and federal governments. Not with your personal identifiers, but to really understand where there are positives and negatives to healthcare providers having what they need to meet these demands.” She forewarned that “a spike will come as more and more [people] have access to prioritize those at higher risk – those with a preexisting condition of an immunosuppression and the elderly with existing conditions for testing and in the lines. “This is a response for all of America, for Americans,” Birx said.

Immunologist Dr. Anthony Fauci of the National Institutes of Health of the United States said, “the travel restrictions have been a very positive way that we have prevented more of the input from outside in and the containment and mitigation from within. “The worst is yet ahead for us. It is how we respond to the challenge that determines what the ultimate endpoint can be.”

As of March 18, President Trump and Canadian Prime Minister Justin Trudeau announced that they are temporarily closing the border to non-essential traffic in hopes of controlling COVID-19.  Pence says to review the federal guidelines until further updates are announced.