Although from 1995, ‘Outbreak’ is eerily relevant today 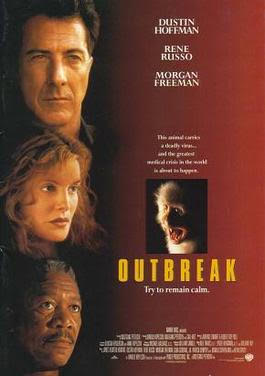 Now trending on Netflix, the movie “Outbreak” strikes close to home for viewers today as the world deals with the COVID-19 pandemic.

Starring Dustin Hoffman, Rene Russo and Morgan Freeman, the movie was bound to be a success in 1995. However, the cast and crew probably did not see this resurgence of popularity happening in 2020, around the film’s 25th anniversary.

Hoffman plays Colonel Sam Daniels of the Army’s Medical Research Institute, who is investigating a seemingly new disease that is quickly spreading through America. What is unclear to the characters is how the disease came to America in the first place.

Viewers learn in the beginning scenes that the disease originated in a small village in Africa, and that the United States military decided to drop a bomb on the town instead of curing it. This eliminated the disease, or so they thought. We later see that a monkey from the village is still carrying the deadly disease and is captured, put on a ship and placed in an American pet store. Soon after these events, the outbreak in America occurs.

What is so shocking about watching this film today is the way it shows how the disease spread. Precautions against our current pandemic are being taken today such as social distancing and excessive hand-washing. Likewise, in the movie, we see the Center of Disease Control (CDC) attempt to implement the same rules, yet people don’t adhere to these warnings, just as some are doing today

One big difference between the events of this movie and the challenges we face today is that they did not have the same access to news that we have.. We see many in the movie are confused about what is happening, or completely unaware. However, in today’s world, we have access to 24-hour news reports. Of course, people still can choose to remain ignorant to current events, but we are blessed to have accurate information at our fingertips if we wish to access it.

Another aspect of this movie that led to its success is the interesting subplots. It is not only about a disease spreading, but about corruption in the U.S. Army, which we see as the character Daniels fights against his own team to try and do the right thing. This storyline leads to many action scenes and dramatic moments that will have you on the edge of your seat, including a high-speed helicopter chase.

A fascinating subplot is the romance between Daniels and his ex-wife Robby Keough, who works for the CDC and is also fighting the outbreak. Viewers see them brought together through the traumatic events, with a dramatic, tear-jerking scene of Daniels risking his life for her.

Although the disease in the movie is much more fatal and fast-spreading, “Outbreak” shows us that hardships usually have a way of bringing people together. It also reminds us that in times like these we must seek accurate information, support our healthcare professionals and do everything in our power to flatten the curve, such as social distancing and self-quarantining.