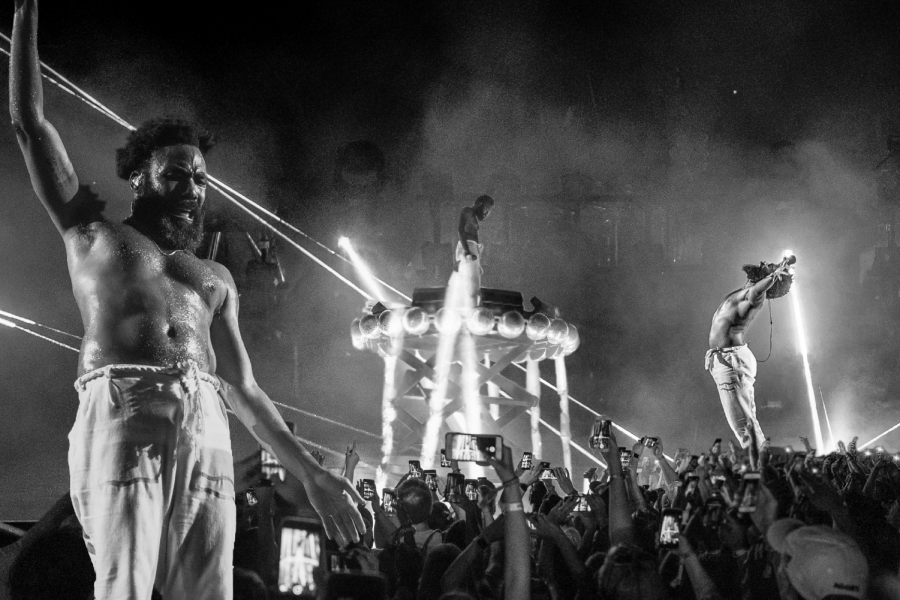 Childish Gambino performs during his This Is America tour. The tour concluded during Austin City Limits weekend two.

Shortly after his Grammy win in 2018, Donald Glover announced that this fourth studio album would be his last as Childish Gambino. On March 22, Gambino blessed our ears with the release of his fourth and final studio album, ”3.15.20.”

The album is a surprise to many fans as there were no hints before it dropped on streaming services last Sunday. The album was initially released online as “Donald Glover Presents” for a short time on March 15 before being pulled hours later.

The album combines Glover’s usual use of groovy beats and smooth vocals. Every song on the 12-track album is a musical journey. He delivers another R&B infused hip hop/rap album that is perfect for listening to over and over again.

Every song but two are titled based on the time they start if you listen to the album on YouTube. The album opens with “0.00,” a slower song causing an almost out of this world experience, echoing the same words over a long drawn organ. It gets listeners set for the rest of the album, transporting them into Gambino’s world.

It then moves into “Algorhythm,” one of two songs that Gambino shared exclusively with ticket buyers of the This is America tour. The song starts with a techno beat and Gambino’s digitized voice. The beat stays, and we get Gambino’s real voice during the chorus.

Gambino is right when he sings, “Everybody move your body, now do it/Here is something that’s gonna make you move and groove.” Not just this song, but every song on the album will make you do just that.

The next two songs bring out the most prominent features on the album. “Algorhythm” perfectly transitions into “Time,” which features Ariana Grande. “Time” definitely has a more pop feel but still features Gambino’s personal style and flair. “12.38” features 21 Savage. Glover flexes his writing ability as the majority of the song is him rapping one long verse while 21 Savage gives a tonal separation in rap styles.

The album takes a turn with “35.31.” The faster-paced song is fit for summer days. “35.31” has an up-tempo and bouncy beat perfect for dancing through your to-do list. It transitions perfectly into “39.28.”

“47.48” and “53.49” wrap up the album with “47.48” blending funk and R&B. Gambino returns to themes similar to his 2018 hit,  “This Is America,” twisting it with themes of living in the present. It also features a conversation between him and his son, which just pulls at your heartstrings. “53.49” blends funk-rock and rap in a song that flawlessly wraps up the album. The verses reminisce his sound on his first album, ”Camp,” and blends perfectly with his current music in the chorus.

While Glover stays busy in other ways, it’s hard to say if he is completely done with music. Can releasing the album on a website called donaldgloverpresents.com mean he might release music under his own name? Until he proves otherwise, “3.15.20” is the cap on the music from one of hip hop’s most prolific artists. And what a bittersweet ending it is.