Dreaming of Selena: Remembering the Queen of Tejano 25 years later 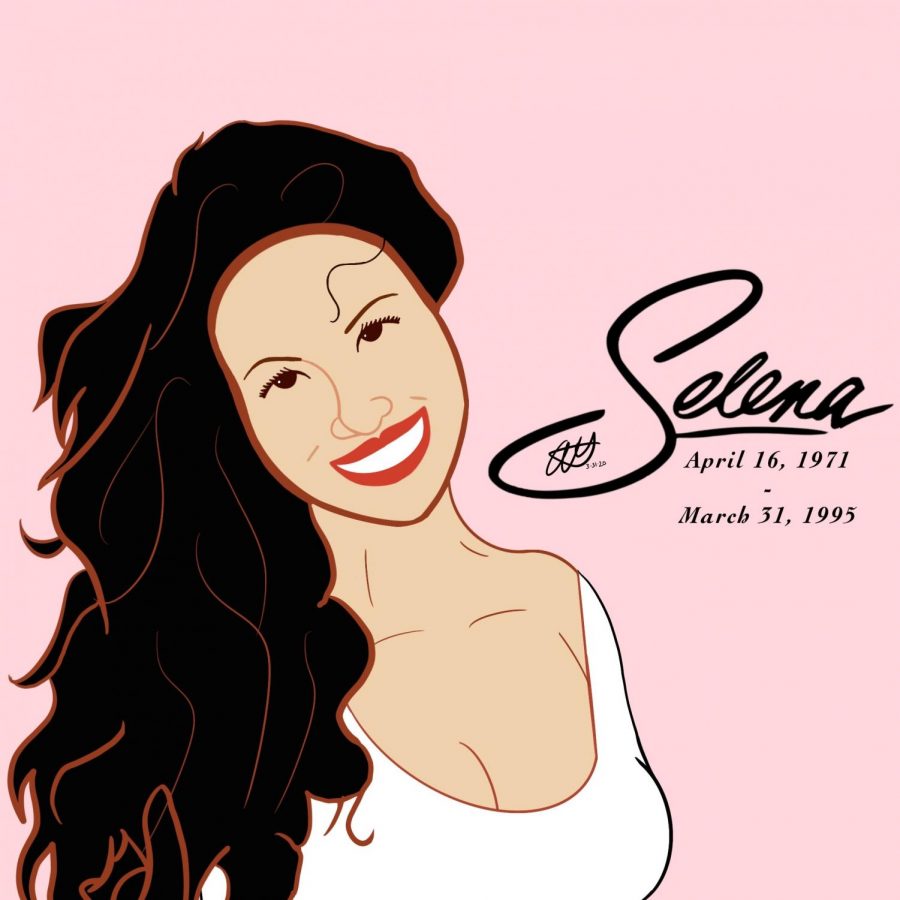 Selena was the top-selling Latin artist of the 1990s, according to Billboard. In honor of the 25th anniversary of her death, MAC Cosmetics is launching a line inspired by her on April 21.

March 31 marked the 25th anniversary of Selena Quintanilla Perez’s death. Better known as Selena, the Queen of Tejano once said, “The goal isn’t to live forever, but to create something that will.” Selena did just that, leaving the world with a legacy that is truly her own.

An inspiration to Mexican-Americans across the country, the Corpus Christi native has impacted many lives, old and young. Freshman Ronnie Palacios offers up a few words on what Selena’s music means to her.

“My parents used to talk about how popular and influential she was. I actually remember watching the movie about her as a child, even before listening to her music,” Palacios says. “I listened to all her songs as a teen at that point and was so influenced by her music, her story and her as an artist in general. My dad and I still listen to our favorite Selena songs every now and then and continue to share our admiration for her as fans.”.

Selena’s last performance was at the Astrodome at the Houston Livestock Show and Rodeo, one of the largest rodeos in the country. She, her family, friends and loyal fans were taken by surprise when they later found out that it was her last performance.

A little too loyal of a fan was Yolanda Salvidar, Selena’s president and manager of her fan club. Saldivar embezzled $60,000 and when the Quintanilla family confronted her about it, she pulled a gun on Selena at a motel, causing her to die from major blood loss and cardiac arrest. Salvidar was sentenced to 30 years in prison and will be eligible for parole in 2025.

While death is often something to mourn over, sometimes it proves to be more powerful to celebrate the lost soul. Following her death, fans visited her hometown and family to pay tribute to the influential singer, with 60,000 attendees at her funeral. Her death left Latinos and Americans devastated, but her music lives on forever.

Two weeks after her death, Texas governor and former president George W. Bush announced April 12 “Selena Day” stating that “she represented the essence of South Texas culture.” On Shoreline Blvd in Corpus Christi, fans can find the Selena Memorial Statue, a life-size bronze statue of the Queen. On May 9, a tribute concert was to be held at the Alamodome in San Antonio, but concerns involving the coronavirus pandemic have postponed the show.

COVID-19 is not strong enough, however, to stop fans from celebrating her influence. To this day, the entire country remembers her unique eye for fashion, as seen at the rodeo, where she rocked a sparkly purple cut-out jumpsuit.

Selena Etc. was the late star’s personal line based in Corpus Christi, which included a nail and hair salon and clothing boutique where she influenced her supporters’ styles. All over social media, celebrities like America Ferrera and Demi Lovato have dressed up in the iconic outfits of the pop-Tejano singer.

The late artist was inspired by musicians Garth Brooks, Gloria Estefan, Bonnie Raitt and Janet Jackson. Her music led her to win Best Female Vocalist at the Tejano Music Awards seven years in a row. She also topped Billboard’s Hot Latin Tracks chart with her song “Contigo Quiero Estar.”  Her album “Buenos Amigos” ranked No.1 in Hot Latin Tracks. Selena became the first Tejano musician to win a Grammy, commemorating her album “Live.” Following her death, her album “Dreaming of You” hit No.1 on Billboard 200.

To help celebrate her lasting legacy, listen to this playlist featuring 25 of her hits that changed the music world forever.