While simple, ‘All the Bright Places’ brings a heartwarming story to life against the pain of tragedy 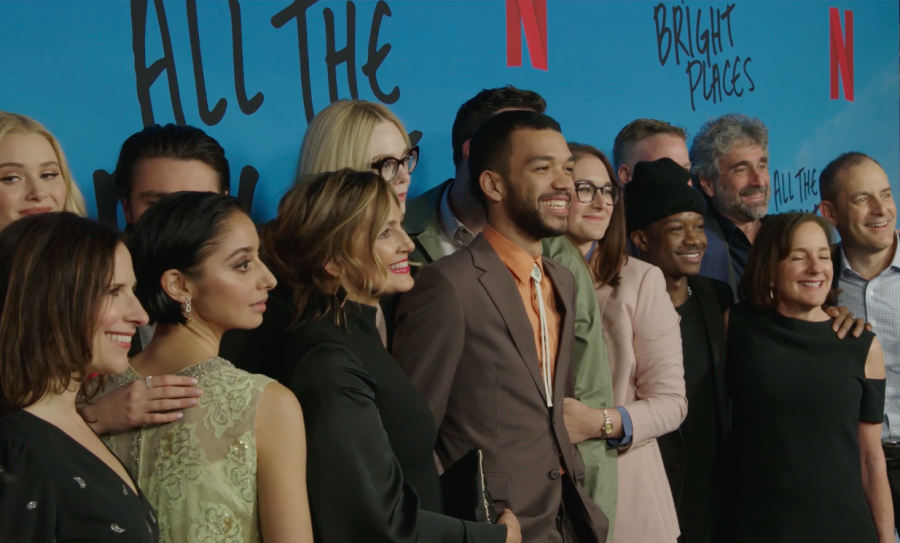 'All the Bright Places' premiered on Netflix on Feb. 28. It currently holds a score of 69% on Rotten Tomatoes.

Director Brett Haley brings yet another thrilling and emotion-filled film from novel to screen with “All the Bright Places.” His other works include “Looking for Alaska” (2019), a TV-mini series, and “Sorta Like a Rock Star,” which is yet to be released. Blending spontaneity with the serious, realistic and blunt concept of self-exploration between two young teenagers, this film explores the unbounded nature of life.

The film adaptation of Jennifer Niven’s 2015 novel delves into the emotional whirlwind of teenage life. The romantic drama is based on the tragic death of Violet Markey’s sister from a car accident that sends Violet into a sorrowful chapter of her life.

Violet (Elle Fanning) and Theodore (Justice Smith) are two teens who find each other in the midst of their pain and grow together. It is a love story between two teenagers that meet at their most vulnerable states.

This film is a must-see. It produces a mystery within a realistic story of teenage life that quickly becomes compelling. Expanding on such a basic theme with an inventive lense sparks interest.

The approach that this film takes to depict teenage life and mental illness is unlike anything seen before and is perfect for anyone willing to take an insightful and nostalgic journey back into teenage life. Combating the desire for isolation that pain brings, this film distinctly mends tragedy with triumph while exposing the very depth of interpersonal struggle.

Originally avoiding any type of social interaction, Violet works to escape Finch’s desperately unique attempts at capturing her attention, but is eventually convinced. As Violet and Finch experience both an emotional and physical journey to discover “the greatest wonders of Indiana,” they both begin to fall for each other.

The friendship and love that blooms in the wake of Violet and Finch’s complicated life circumstances brings warmth to some of the heavier topics. While the film does a great job of crafting a more than realistic view of youthful life, it touches on sensitive mental health topics that may trigger some viewers. Viewer discretion is advised.

The film achieves subtle beauty through its simplistic script. Every word becomes emphasized. The adventures of Violet and Finch are matched with rhythmic soundtracks to strengthen and expand the emotions of the audience. Throughout their road trips, dialogue is explicitly limited to make every word precious and the emotion the focal point. Haley with tracking and over-the-shoulder shots produces clarity and joy within the confines of a vehicle: something that would have originally been unpleasant exposure therapy for Violet.

Manipulating colors and utilizing distinct cinematography choices also emphasize every emotion in every scene. When Violet and Finch explore the streetlit Virginia graffiti park, low angles and the heightened use of yellows and blues are employed to express optimism and tranquility. These techniques bring viewers closer to the narrative, allowing for a graceful flow throughout the story.

Showcasing the most vulnerable parts of human life, “All the Bright Places”  counters the stigma of negative emotions to reveal that pain is just a part of life. This approach is a reminder of the value in every experience, whether positive or negative. Normally, film adaptations from novels do not capture the same essence of the book, but this film is successful.

This heartfelt love story will bring you warmth, but leave you with much more as the story unfolds. If nothing above resonates,  it will at least remind you to enjoy the beautiful moments of the journey, not just the destination.