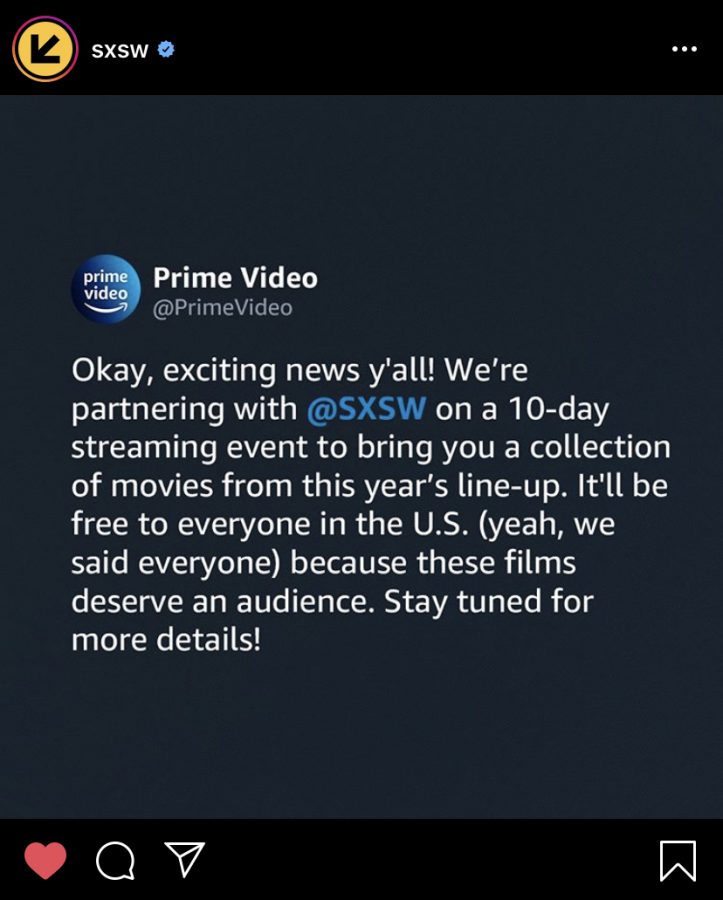 As festival fans gear up for the limited releases at the end of the month, South by Southwest also partnered with Vimeo to release six of the episodic pilots for people to enjoy. Check out SXSW.com for more details.

On April 2, South by Southwest announced that it has partnered with Amazon to release some of the films that would have been in this year’s film festival online. The 10-day event has not announced an official start date yet, but SXSW and Amazon are shooting for it to begin in late April, according to a SXSW release. The event will not be hiding behind the Prime paywall as all films included will be free to anyone with an Amazon account.

Of the 123 feature-length films, some of them have already found a home somewhere else, but for others, finding a place to be seen is a challenge as theaters close due to COVID-19 with no foreseeable reopening date in the future. While no films have confirmed that they will be in the online film festival, there are still a few worth checking out just in case they are.

Winner of this year’s Grand Jury Award for the Narrative Competition, “Sh–house” is a story of a college freshman looking for normalcy while transitioning to college life. The film offers a true coming of age story that all young adults can relate to. It features one of the best young under the radar actors, Dylan Gelula (“First Girl I Loved”), working right now. The ambitious project is written, directed and stars Cooper Raiff in his debut feature film. While this film may not have been a top priority to see during the week of SXSW, knowing it won the Grand Jury Award this year sparks extra curiosity to see the film.

Another Jury award winner, this time for directing, is “Topside.” This film should definitely be at the top of your list this year. The story is absolutely compelling, following a mother and daughter who call a small community that lives in tunnels under New York City home. They are forced out on a cold winter night and struggle to find shelter and return home. The directing duo behind the film, Celine Held and Logan George, are no strangers to SXSW. Their short film “Caroline” debuted at the festival in 2018 and is outstanding.

Based on a book by the same name, “Arkansas” chronicles deep south drug trafficking during the 1980s. The film boasts a star-studded cast featuring Liam Hemsworth, John Malkovich and Vince Vaughn. It also stars Clark Duke and is the directorial debut for the actor and comedian.

This film is a mystery thriller set to make a night in great. The story of a young woman investigating her cheating boyfriend doesn’t just bring about revelations about her relationship, but with herself. The film, another feature-length directorial debut for Clair Oakley, has a 100% on Rotten Tomatoes. While the film already debuted in London last year, it is sure to make waves with American audiences during and after the festival, which makes it an absolute must-watch.