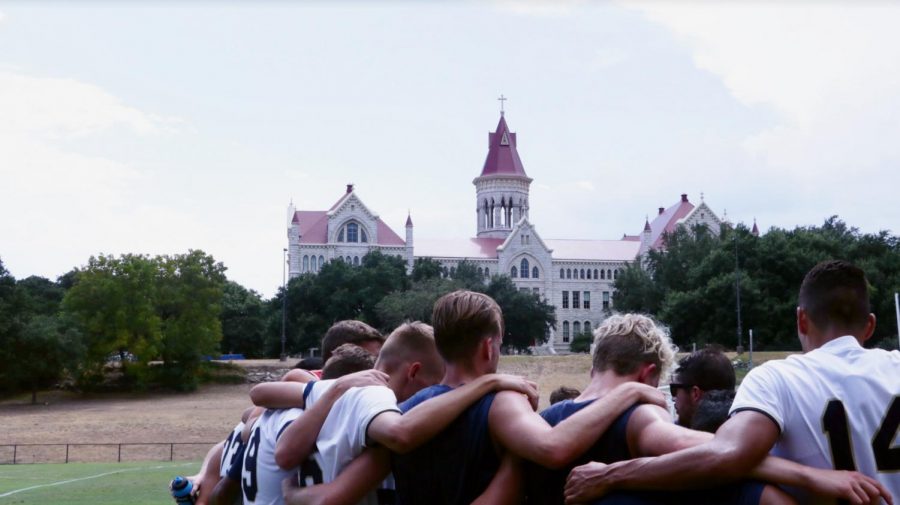 Men's soccer was one of the St. Edward's varsity programs disbanded after financial issues.

On April 15, St. Edward’s University discontinued six varsity sports, effective at the end of the spring semester. The university reached its decision after COVID-19 placed it under heavy economic strain.

The six varsity sports that were cut include men’s and women’s tennis, men’s and women’s golf, men’s soccer, and cheer. The latter will not be discontinued but, instead, transitioned to a club team under the guidance of the RecWell Department.

“I am deeply grateful to the coaches who have worked diligently over the years to build nationally recognized and well-respected programs. The coaches and student-athletes in these programs are talented and hard-working, and I respect them immensely.”

According to the university’s athletic department, this decision follows a comprehensive evaluation of the athletics program, including sport sponsorship, state of available facilities, cost of running programs and future enrollment expectations.

The decision comes as a surprise to many student athletes, particularly men’s soccer sophomore Eddie Villatoro.

“We received a text from the coaches around 11 a.m. saying that the school had disbanded our program,” Villatoro says. “Then an hour later we received an email from [Senior Associate Director of Athletics] Melinda Terry explaining what had happened.”

The men’s soccer team reached the conference tournament in their inaugural season as members of the Lone Star Conference this past fall.

Villatoro, a native of Carrollton, Texas, plans to transfer to another school in Texas. However, some of his international teammates might not be so lucky.

“Studying in the United States has been a lifelong dream for me,” Clark says. “There’s nothing certain at this point, but I’ll stay in the U.S. and pursue my studies at another university if I’m not returning to St. Edward’s.”

As for cheer, sophomore Gillian Chapman-Browne warns of the hazards that come for cheerleaders without access to trainers because they’re not part of a varsity sport.

“If you’re a cheerleader, you understand that not having access to trainers runs the risk of major injuries,” Chapman-Browne says. “Now, it’s far too dangerous without that safety net.”

Chapman-Browne, a Dallas native, plans to take advantage of the athletic department’s pledge and return to the Hilltop to complete her communication degree.

According to the St. Edward’s University athletic department, all scholarship-eligible student-athletes impacted by this reduction will have their athletic scholarships honored for the duration of their undergraduate enrollment at St. Edward’s.

For some, like Chapman-Browne, the offer is a no-brainer, but for other student-athletes, the offer doesn’t satiate their desire to continue playing the sport they love.

“I love the game so much that I couldn’t see myself not playing for the next two years,” Villatoro says.

With the university’s drastic decision, six head coaches were laid off.

Men’s tennis head coach Estevam Strecker, a native of Novo Hamburgo, Brazil, has this to say about leaving his players behind:

“The last six years have been the best six years of my career. The thought that I may never see them again and I never had the opportunity to hug them, to say thank you, or even goodbye is what hurts the most right now.”

Meanwhile, women’s golf head coach Jennifer McNeil tweeted this out to her team:

“To all my players past and current. I appreciate your belief in me & each other. I’m forever thankful for you & the way you impacted my life. I will never forget you & will always be a phone call away. Love you!”

In the spirit of gratitude, student-athletes also thank their coaches and trainers for their hard work.

“I would really like to thank our coach. She is the best cheerleading coach I’ve ever had and there’s no one who could replace her,” Chapman-Browne says.

Clark adds the following regarding the men’s soccer coaching staff:

“Brian Young and Corey Miller were fantastic coaches who put all their heart into what they were doing. They believed in me from the beginning and I appreciate that. Also, thank you to Dan for always being there for us. Lastly, a massive thank you to Aidan and Sean, your drills and your tips made a difference on our program.”

St. Edward’s discontinued six varsity programs on Wednesday. On paper, programs are just teams, a collection of college athletes, but to student-athletes, a program is a family.

“It felt like my second family because we were so close on and off the pitch,” Villatoro says.