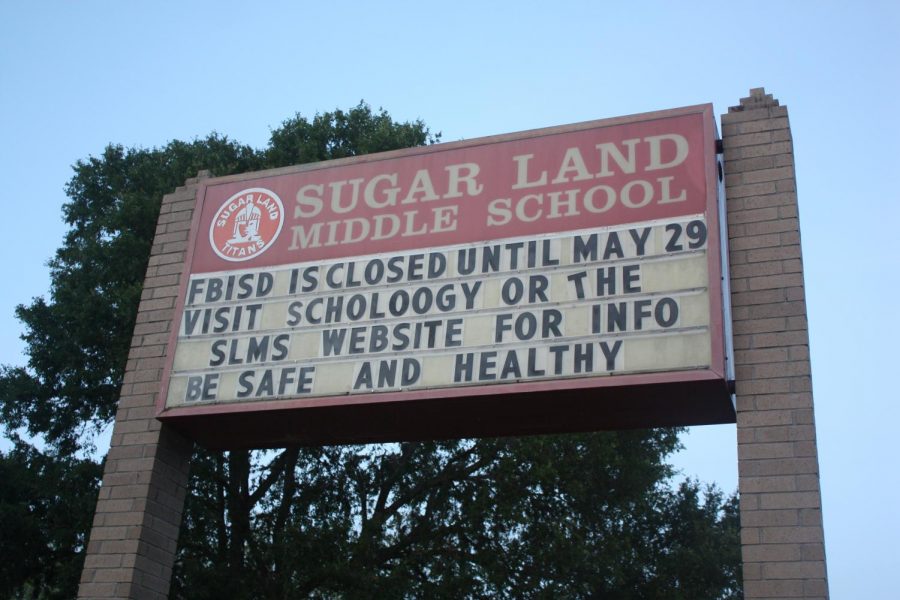 Sugar Land Middle School in Fort Bend ISD has moved all classes to an online platform. All Texas schools will continue with similar strategies for the rest of the school year.

On April 17, Governor Greg Abbott announced his plan for reopening Texas slowly but surely after President Trump said governors will “call [their] own shots.” Following the president’s press conference on the previous day with Coronavirus Response Coordinator Dr. Birx and Dr. Fauci, the director of the National Institute of Allergy and Infectious Disease. Abbott took into consideration the guidance provided in hopes of getting Texans back on its feet.

After a statement made on April 13 by Abbott that reopening the state “is not gonna be a rush-the-gates, everybody-is-able-to-suddenly-reopen-all-at-once” situation, he proved to stick with his plan, once announced at noon on April 17.

Abbott opened the conference by thanking those working on the frontlines and his fellow staff members who have aided him in making the decision for the state. While keeping in accordance with the three phase plan introduced by Birx and Fauci on Thursday evening, the governor’s executive order includes six parts to his plan.

Gov. Abbott’s first announced implementation of a “Strike Force.” The team’s job is to help companies safely get back to business as they share recommendations and safe practices for businesses based on researched data across the state.

The second part of his plan set forth that as of April 22, doctors, nurses, hospitals and medical centers will be allowed to perform elective surgeries. He announced that Texas has plenty of PPE and enough rooms in Texas hospitals. This step will loosen the restrictions on surgeries and permit a return to diagnosing and treating patients with illnesses other than COVID-19.

He then established further protection for high-risk seniors and the facilities in which they live. This places a limit on the amount of visitors, creates a possibility of testing visitors and plans to limit movement of workers in the homes.

As for retailers, all stores in Texas will begin operating “retail-to-go” beginning April 24. Within the next few weeks, Abbott said a plan will be announced and prepared to be set in motion concerning venues like restaurants and movie theaters.

With rising concerns of Texans’ physical and mental health, Abbott made the decision of reopening all state parks. Visitors are only allowed on the sites if they are wearing face masks, are in groups no larger than five people and stay six feet apart from other visitors at all times. Parks will be open as of April 20. This was announced after a protest in front of the governor’s home and the Texas State Capitol. Protestors ask to reopen the economy and that “they don’t want government mandates and things like parks closed,” according to Fox 7 Austin.

After speaking with multiple doctors, the state concluded that it is far too dangerous to allow schools to reopen. All public, private and higher education schools will stay closed for the remainder of the 2019-2020 school year. However, administrators and teachers may return to campus to virtually teach or clean out their classrooms. In the following days to come, Higher Education Commissioner of Texas Harrison Keller will announce further instruction for colleges and universities.

On April 27, Texans can expect an update on additional ways in which the state will safely reopen, guidance for employers to help their workers and a phase-step plan to follow.

“Texans are battling a colossal challenge and an invisible enemy that has tested our lives and tested livelihoods,” Abbot said. “Part of our Texas brand is our ability to overcome challenges. We have overcome far more challenges that we can count. Step by step we will open Texas.”