Netflix coming of age movie is nothing more than a poor, outdated depiction of relationships 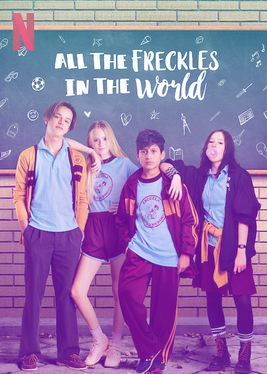 'All the Freckles in the World' was originally released in Mexico on Sept. 27, 2019. It peaked at number eight at the box office.

Coming of age movies depict life transitions that many viewers themselves may be going through.

While there are many movies that do a good job at this, “All the Freckles in the World” unfortunately does not.

It is not profound, nor does it give viewers characters to root for as they deal with life. What it really does is waste your time and leave you confused when the credits start to roll.

Released in January on Netflix, it follows José Miguel (Hanssel Casillas), as he navigates his new school while also trying to win the affection of Cristina (Loreto Peralta), the popular girl at school.

At first, it seems like the usual underdog story: a not-so-popular kid, with the help of his friends, tries to win the girl of his dreams. While this trope is fine, the reason and build-up to this underdog team isn’t so great.

José Miguel falls in love with Cristina instantly. He later finds out that she’s dating Kenji (Luis de la Rosa), a soccer star at the school.

While many would stop when they realize that someone is taken, our protagonist is even more determined to get the girl. Later on, we find out that he makes a bet with Kenji, where the winner gets Cristina.

This is one of many problems with the plot. Not only do the characters think it’s perfectly fine to wager a human over a simple game of soccer, but they do so without telling Cristina.

She isn’t someone’s property to be used as a prize between Miguel and Kenji. What’s also troubling is that Miguel is perfectly fine with this bet, not even stopping to think about Cristina. If he really cared about her, he wouldn’t have gone through with it.

As the movie continues, more problems come to light. Most characters aren’t fleshed-out and act more like robots than actual kids. Not to mention a subplot that doesn’t even relate to the main plot and is also very inappropriate.

If you’ve ever thought about watching “All the Freckles in the World,” don’t bother wasting your time on it. There’s plenty of other Netflix content, such as Unorthodox and The House of Flowers, that are worth your time.