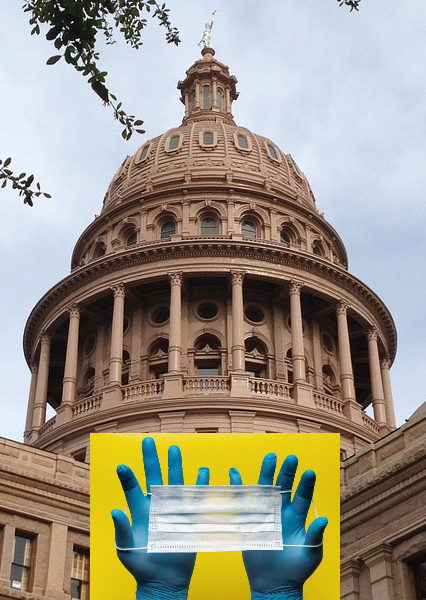 Texans ready to get back on their feet were spotted protesting at the Texas State Capitol on April 18. Mayor Steve Adler said the arrangement was dangerous and "selfish."

Throughout the past few weeks, people across the United States have been holding protests against stay-at-home and social distancing orders that were put in place to prevent the spread of COVID-19. With countries like China just having recovered from the virus, the US stays far behind when it comes to recovery. Nonetheless, some Americans are urging the country to let them work in the midst of the pandemic.

Many of these protests have been taking place recently all over the US. Specifically in Texas, one of these protests took place at the Texas Capitol in Austin on April 18. About 50 people arrived to protest stay-at-home orders, holding signs that said things like “Freedom is essential, open up Texas,” and “#OurLivesMatter,” alluding to the #BlackLivesMatter movement that began in 2013 to protest the acquittal of George Zimmerman in the Trayvon Martin case.

In a statement, Mayor Adler said that the group was being “selfish” by gathering at the protest, where they were not practicing social distancing orders of staying six feet apart so as to avoid the spread of the virus, which is easily transmitted through the mucus or saliva of an infected person. Because many people can be asymptomatic to the coronavirus, this raises concerns of protesters spreading the virus at the rally.

“I’m concerned that the virus could have been in that group,” Adler said. “That’s how the virus spreads. People who are asymptomatic not knowing they have it, passing it along. I think the participants in that were acting pretty selfishly, putting the community at risk.”

Texas is one of the many states that is planning on reopening in the coming days. It has already begun opening businesses as of April 20 as part of the governor’s plan. According to Gov. Greg Abbott, he intends to reopen the state in a controlled manner, by first opening businesses.

Other states that have already eased restrictions are Georgia, Oklahoma, South Carolina and Alaska. The stay-at-home order in Texas is still set to expire April 30, though some businesses have already begun to open up with some restrictions.

Though there is still a lot of uncertainty with the virus and how it’s spreading in the U.S., some speculate that social distancing and quarantine precautions could extend into the next few years. The U.S. hasn’t been as quick as China in slowing the spread of the virus, so this is a case that many see likely unless stricter restrictions are placed on Americans and more testing kits are made available.

For now, it seems that American hospitals will continue to be strained as the pandemic continues to run its course. Experts are urging those who can stay at home to do so to decrease the risk of prolonging social distancing and stay-at-home orders.