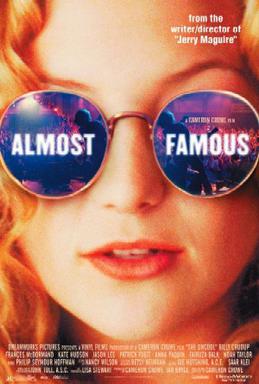 ‘Almost Famous’ was originally released on Sept. 8, 2000 by DreamWorks Pictures. It grossed $2.3 million during its opening weekend.

Think about the first band you ever loved — like truly adored. I’m talking listening to an album on repeat from start to finish, knowing every lyric, smooth guitar lick and punchy kick, and crying over them type adored.

Now think about putting these elements — the sentiment of the artists, the intense emotion evoked among listeners like yourself, the structural idiosyncrasies that their sound is ripe with — into words. This is music journalism. Cameron Crowe’s “Almost Famous” depicts the glamour, misadventure and grit of music journalism in a passionately twisted narrative led by his teenage self, and on its 20th anniversary, it endures.

An assignment to cover a Black Sabbath concert puts William Miller (Patrick Fugit), a sheltered boy from San Diego, on a career catapult to the stars, or rockstars, rather. Here, he meets Stillwater, the opening band. By chnace, he also meets the mysterious Penny Lane (Kate Hudson) and other free-spirited “band-aides.”

It’s hard to believe that Stillwater doesn’t exist in our reality. It’s also quite sad, considering their charm, talent and antics could make a dedicated fan of any viewer. When William scores a cover story assignment with Rolling Stone, he embarks on tour with the up-and-coming rock band in hopes of crafting the perfect profile.

Lester Bangs (Phillip Seymour Hoffman), the editor of Creem and a celebrated American music journalist, is William’s rugged journalistic guardian angel throughout the film. “Be honest and unmerciful,” he tells him. This is key wisdom for William, and perhaps some advice that all music journalists can aspire to.

Passion drives music. Passion also drives music writing. William’s dedication is unmatched as getting the story becomes progressively difficult. Russel Hammond (Billy Crudup), the lead singer of Stillwater, is particularly difficult as he is tangled in conflict among bandmates, a scandalous relationship and self-destructive tendencies. William persists despite this, even when being referred to as “the enemy” time and time again. Sound familiar? It seems journalists have been viewed through this lens for decades now.

William’s idealistic worldview brings something refreshing to the film, and to journalism, suggesting that starry-eyes are not a weakness. In fact, some of the best work often transpires from their gaze. William gets a taste of the real world while maintaining this fragile idealism. There’s pain, there’s suffering and there’s discontent, but there are also moments, feelings, memories and, of course, music, that makes it all worth it. This truth doesn’t shake him — it compels him.

Penny shows William love and heartbreak, Stillwater shows him the pure excitement of independence (and a bit of recklessness), and the music drives it all forward. These experiences collide to make him an all-around more passionate writer.

“Almost Famous” is not so much about music as it is about growing up. It exemplifies the idea of being so dedicated to your craft that you’re willing to leap out of your comfort zone and sprint until you get to where you want to be. Facing the music doesn’t taint idealism — it strikes a productive balance that every writer needs. And all of this being accomplished by a fifteen-year-old makes it all the more inspiring.