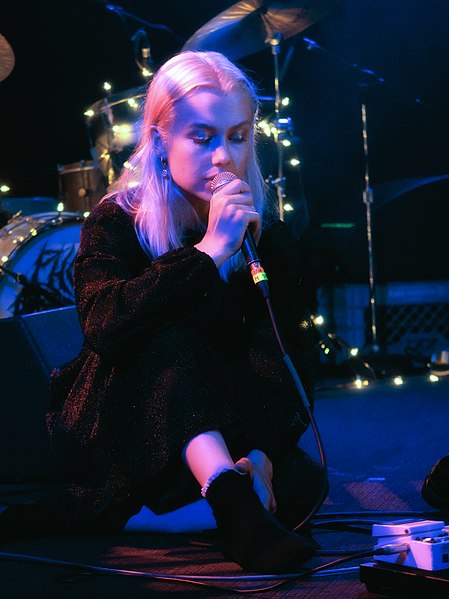 Bridgers recently released her second full length album ‘Punisher’ this past June. She was originally supposed to be the opening act for the 1975’s most recent tour, but it has since been postponed due to COVID-19.

Walking out in the skeleton onesie that she appears in on the cover of her album “Punisher,” Phoebe Bridgers began her set for Red Rocks Unpaused. Her haunting vocals played through the amphitheater to a completely invisible audience as she opened with her 2017 release, “Motion Sickness.” Behind her, colors danced across the rocks that make this venue so unique. That and the patrons, of course. But this time is different.

Bridgers and her band made jokes to each other, even mentioning that they had a pre-recorded applause track ready to play after their songs so that it felt “normal.” With the pandemic ranging on, venues remain closed and tours halted. Visible, a phone company based in Colorado, teamed up with Red Rocks to offer the three day concert series, hoping to give viewers the “…power to be part of the Red Rocks concerts from the comfort of your couch.”

Watching live, viewers were able to change the color of the set lights, send emojis to the artists and vote for their favorite song to be played as the encore. The biggest feature seemed to be the ability to send messages to other viewers, with thousands of them sprawled across the screen unbeknownst to the band. Comments ranged from how incredible the songs were, how simple her tour outfit was and even how Bridgers called out Adele for cultural appropriation.

With messages and emojis flashing across the screen, it was very easy to lose yourself, not only to the music or to the heart-pounding beats being produced on screen in front of you, but in the dialogue between viewers and the “PHOEBE PLEASE SAY HELLO TO ME” messages.

While COVID-19 continues to shutter businesses and cancel plans, we’re left to wonder if concerts will ever be the same. Visible certainly made an effort to make us feel like we’re in front of these artists and back in the places that make us feel like home, but it still fell short. It almost felt like watching a live performance from the band for a radio station, with a few thousand unnecessary emojis and comments across the screen (and let’s not forget about all of the company branding).

Towards the middle of the set, one of the band members made a comment about how eerie this new medium is and how he wished “…a drunk British guy would yell ‘you suck’ at them. Bridgers reiterated how strange it all is, saying she misses her fans.

The words echoed across the empty venue as she thanked viewers for a great night. But there is light at the end of the tunnel as Bridgers sang in her cover of “It’ll All Work Out.” “There were times apart and times together / That’s the way it goes, it’ll all work out.” We can only hope things do get better, and that virtual concerts become a thing of the past.