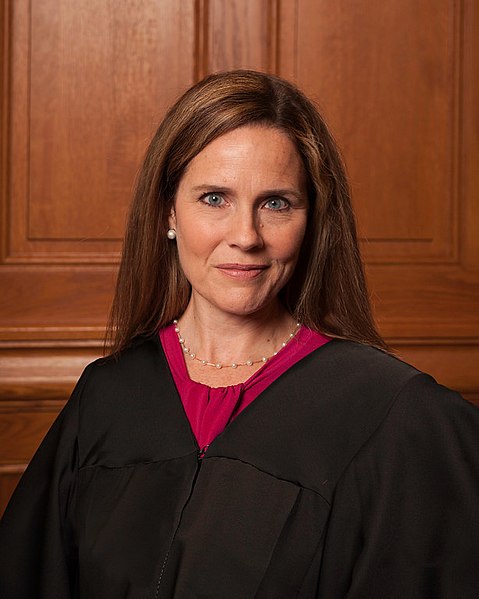 Amy Coney Barrett serves as on the U.S. Court of Appeals for the Seventh Circuit. Many Americans fear she will vote to overturn Roe v. Wade if appointed.

Barrett graduated from Notre Dame Law School at the top of her class in 1997 and became a judicial law clerk to Judge Laurence Silberman. She served under Justice Antonin Scalia of the U.S. Supreme Court from 1998 to 1999.

In 2017, Barrett was nominated by President Trump as a U.S. Court of Appeals judge for the seventh circuit, and when she was confirmed, Trump kept her in mind as a potential Supreme Court nominee.

As an heir to Scalia, Barrett shares his Roman Catholic roots and has adopted his views such as originalism, which is an interpretation of the constitution based on its original understanding from when it was established.

As a conservative and Catholic mother of seven children, Barrett’s views and morals are quite different from those of Ginsburgs, which make Barrett prone to moving the Supreme Court farther right than it has been in a long time.

“I will be mindful of who came before me,” Barret said. “She [Ginsburg] not only broke glass ceilings; she smashed them.” Although Barrett promised to keep her beliefs and legal opinions separate while on the Court, there is a fear that with much more power she will try to undo what Ginsburg has secured in her lifetime.

If chosen, Barrett will be youngest Supreme Court Justice at 48, and will serve the rest of her life, which could mean four decades with her in the Court. Justice Ginsburg served 27 years. .

Having written numerous academic articles on issues like abortion and religion before her days in the appeals court, Barrett is expected to raise these issues before the senators and will most likely pursue her moral belief system.

Barrett’s conservative opinions on issues such as Roe v. Wade and abortion rights are something that she is predicted to overrule, but this is not likely to happen any time soon. Barrett is more concerned with the funding of such things. “It’s a question of whether abortions will be publicly or privately funded,” Barrett said.

Barrett plans on overturning the affordable care act, which would result in many Americans losing their healthcare along with women’s rights being tampered. Most of the Obamacare healthcare plans cover contraceptives, and without it, many women won’t have access to them. Even though Barrett says she would not let her religious beliefs get in the way, this is one of many things that stem from her Catholic views.

Additionally, issues on reproductive rights, the federal government’s power to fight climate change, marriage equality, LGBTQ+ rights and more could come into question by judicial review with Barrett in the Supreme Court.

“I think she is a huge step back, and I’m disappointed, but really not surprised. This is just so entirely in the opposite direction” St. Edward’s senior Ava Pfeiffer said.

“If you can keep in mind that your fundamental purpose in life is not to be a lawyer, but to know, love and serve God, you truly will be a different kind of lawyer,” Barret said.

Although conservative women will benefit from Barrett’s seat in the Supreme Court, if all works in her favor, women’s rights and the rights of the people will greatly be changed. Ginsburg spent her life levelling the playing field when it comes to gender equality, and with a conservative Catholic woman stepping in, America may face many changes.