Breanna Stewart is no stranger to the spotlight, with a record breaking career Stewart is in position to go down as a WNBA great 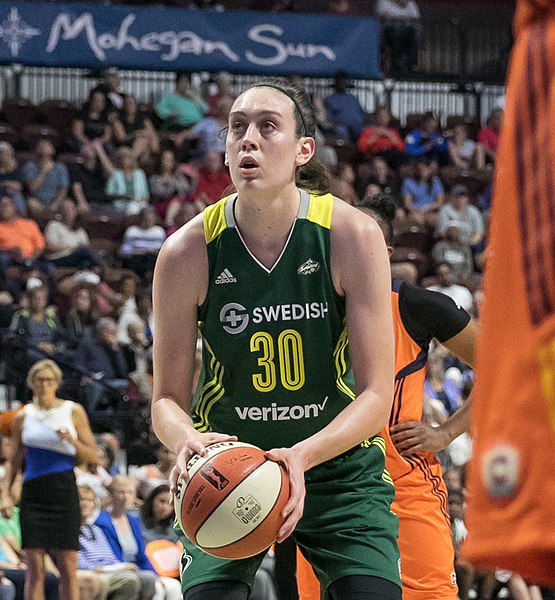 Breanna Stewart will be entering her fifth season with the Storm. Stewart served as a team ambassador in 2019 while rehabbing from an achilles injury.

On Oct. 6, the Seattle Storm won their second title in three seasons by sweeping  the Las Vegas Aces, spearheaded by 2020 WNBA MVP A’ja Wilson, (3-0). The Storm was led by veterans such as Sue Bird and Jewell Loyd, but Breanna Stewart was their most lethal weapon. Prior to winning her second championship and Finals MVP, Stewart was a WNBA MVP, WNBA Rookie of the Year and an All-Star.

Stewart, otherwise known as “Stewie,” is without a doubt a champion. She is a fierce competitor and at 6 foot 4 , plays a significant role on both ends of the floor. However, Stewie was not an overnight success; her notoriety dates back to her college days. Stewart, like many WNBA hall of famers, attended the University of Connecticut (UConn) where she played under head coach Geno Auriema. During her four years at UConn, Stewie won four national championships and made history by becoming the first person, male or female, to win most outstanding player of the Final Four four times.

Therefore, it comes as no surprise that she was drafted at No.1 in the 2016 WNBA draft and has settled into the WNBA quite nicely. But Stewie’s success is not exclusive to the WNBA. In 2019 while playing in the Russian Premier League she earned the EuroLeague Women Regular Season MVP award. Needless to say, since the start of her professional career, Stewart has racked up countless awards and continuously redefined her “ceiling.” Yet Stewie’s ceiling seemed to come crashing down  in April 2019 when she tore her achilles in the EuroLeague Championship Final.

With the support and guidance of the late Kobe Bryant, Stewie went through rehab in LA and connected with the doctors who oversaw Bryant’s injuries. Even though there were no guarantees that she would come back stronger, or even close to who she was before, Stewie chose to make an investment in her future. After a year of recovery and $30,000 in rehab fees, Stewart returned to play in the “wubble” and is looking better than ever.

Stewie kicked off the season with her teammates at IMG Academy in Bradenton, Fl. During her first game, Stewart finished the night with 18 points and eight rebounds. She was hopeful about her future and recovery.

That’s the thing. I feel great. My body feels great. I have this new achilles and now it’s just time for me to go out and play and have fun…what I’m the most proud of is just the fact that I think I’m better now than I was before,” Stewie said in an interview.

After overcoming an injury that is usually considered a death sentence for any athlete across a variety of sports, Stewart came back to win. During the postseason Stewie averaged 25.7 points, 7.8 rebounds and 4.0 assists per game.

The future is bright for Stewart. With her dedication and passion for the game visible on the court, the possibilities seem to be endless.