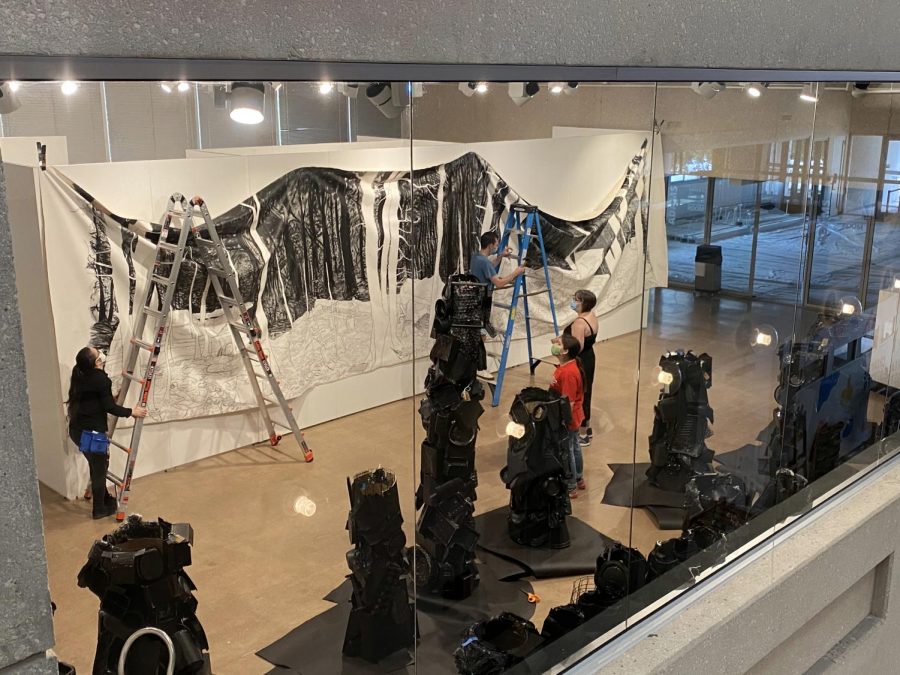 ‘A Dark Wood Grew Inside of Me’ will be on display until Dec. 3 and is the first collaboration between Hammond and West. Hammonds is a professor of art, while West is an associate professor of creative writing.

From Oct. 25 to Dec. 3, the Wright Gallery in College Station will showcase a collaborative exhibit from the minds of St. Edward’s professors Hollis Hammonds and Sasha West.

“A Dark Wood Grew Inside Me” is a collaborative exhibit with a mixture of West’s poetry and Hammonds’ visual arts that warn us of our fragile ecosystem and how we must take better care of the planet.

“The poems that we used for this collaboration feels like we’re trying to get people to both look in the past, but also imagine where we are going, and to really feel deeply where we are now,”  West said.

The works, which go hand in hand, are a completely immersive experience. One of the works, “A Dark Wood,” is made of things that either came from Hammonds’ house or were donated by some of her students.

This particular piece has built-in speakers that play audio of West reading her own poems. It is captivating and invites viewers to experience the work. This exhibit causes people to take a closer look at their own consumerism and how it has affected the climate.

“Take an object and think all the way back into the making of that object and all the way forward into where that object disappears. If you’re looking at something like the lid of a Jo’s coffee cup that ties you back through fossil fuels and into dinosaur bones. If the plastic takes 200 to 400 years to degrade, that lasts longer than me, longer than my daughter, longer than I can imagine myself into the future, but it’s in my life for maybe 10 minutes, maybe an hour,” West said.

Climate change is going to worsen if we don’t start taking action and having longer conversations than those on Instagram.

The goal for the exhibit, according to Hammonds and West, is to have people look at themselves and observe the amount of waste their consumerism adds to the environment.

“In a way, it’s a warning,” Hammonds said. “It’s more subtle, though, because of the way you experience it and you are moved by being physically in the space and the sound.”

Although the exhibit is in College Station, this should not stop anyone from safely checking it out and  supporting our professors. The exhibit is open until Dec. 3, and people are required to wear masks at all times.

Hammonds talked about the struggle of earlier this year and having to postpone the exhibit to what it is now.

“Even recently someone said, ‘Oh, you should probably postpone your show. No one is going to see it,’ and I just felt like this work is relevant for right now, because there’s all kinds of tangential things in the show that relate to our current situation,” Hammonds said.

Visiting “A Dark Wood Grew Inside Me” is like experiencing West’s poems physically, thanks to Hammonds’ brilliant mixed media art. The exhibit is a good example of experiencing self-reflection and thinking about how we contribute to the problem of  climate change.