What this could mean for the future of America 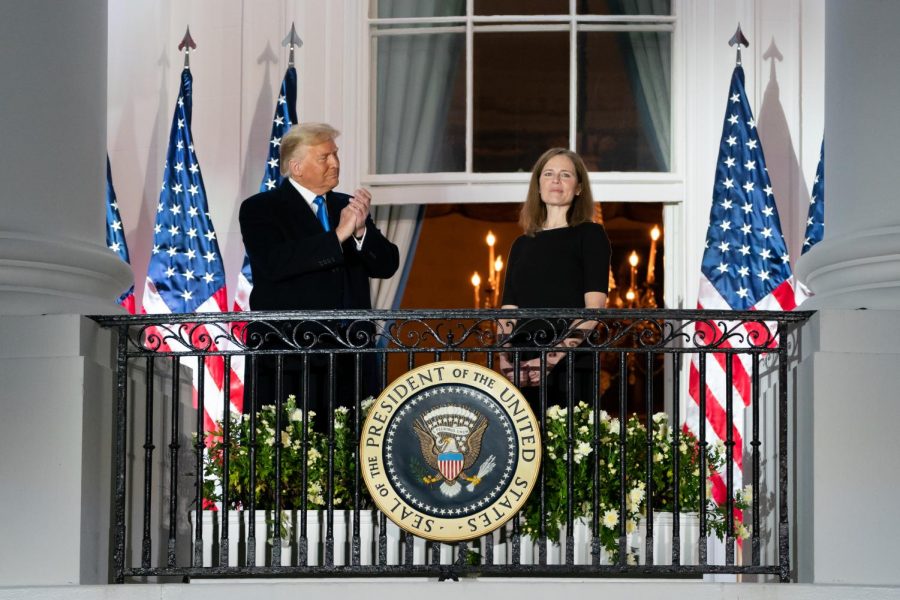 Amy Coney Barrett was confirmed to the Supreme Court of the United States (SCOTUS) on Oct. 26, securing a narrow 52-48 majority from the conservative-dominant senate and no democratic votes. This follows a whirlwind five weeks during which republicans rushed to fill the late Justice Ruth Bader Ginsburg’s seat prior to the Nov. 3 presidential election. It also cements a 6-3 conservative majority, three of whom were nominated by President Trump.

The Trump Administration expedited the process — one of the fastest turnarounds since 1975 — despite the majority of Americans who believe the newly-elected president should fill the seat, as multiple polls have shown. Former President Barack Obama’s 2016 Supreme Court nominee, Merrick Garland, was blocked by senate republicans because it was an election year. “The American people should have a voice in the selection of their next Supreme Court justice,” Mitch McConnell said in defense of the decision. However, the same reasoning has not been considered this time around.

Barrett, a former law professor at the University of Notre Dame, has served as a judge on the Seventh Circuit Court of Appeals since October of 2017. She was also a clerk for the late Justice Antonin Scalia, who she has publicly described as her mentor. Taking after her mentor, she showed her support of constitutional originalism, a concept which asserts that the constitution must be interpreted based on its original understanding at the time of adoption, at her first hearing, stating “I believe Americans of all backgrounds deserve an independent Supreme Court that interprets our Constitution and laws as they are written.”

With a highly conservative voting track record, Barrett raises concern among democrats. While her take on reproductive rights has recently come under fire, namely her threat to Roe v. Wade, her influence on the court could also impact issues of healthcare, LGBTQ+ rights and more.

Here is a roadmap of Barrett’s views, and how her influence could impact SCOTUS rulings.
Abortion
Barrett’s self-identification as an Orthodox Catholic has raised concern among the reproductive justice community, especially considering President Trump’s vow to appoint justices prepared to overrule Roe v. Wade.

While Barrett has not ruled on abortion cases, she has casted votes on oppositions to abortion restriction that imply her stance. In 2018, Barrett joined a dissent concerning cases on two laws in her home state of Indiana. One law required abortion providers to bury or cremate fetal remains, which was ultimately deemed unconstitutional. The other, which banned abortions due to the race, sex or disability of a fetus, was also blocked. She voted to rehear both cases.

Following another case which blocked a law that tightened requirements for notifying the guardians of minors seeking abortions, Barrett joined a dissent stating that the ruling was premature and the law should have gone into effect. The opinion stated that “Preventing a state statute from taking effect is a judicial act of extraordinary gravity in our federal structure.”

In 2006, Barrett voiced opposition to “abortion on demand,” and “defend[ing] the right to life from fertilization to natural death,” in an open group letter published for the organization Right to Life Michiana, according to The New York Times. The letter, published as an ad, called Roe v. Wade “barbaric.” The Chicago Tribune reported that Barrett also signed an anti-abortion ad that ran in Notre Dame’s student newspaper in 2013. The ad was sponsored by University Faculty for Life, an organization she was then a member of.

In a 1998 Notre Dame Law School article, Barret referred to abortion as “always immoral.” While she later explained that she and her co-author were citing the Catholic Church’s teaching that abortion is always immoral, she also stated, “If I am confirmed, my views on this or any other question will have no bearing on the discharge of my duties as a judge.”
Healthcare
The Supreme Court is set to hear the Affordable Care Act (ACA) case on Nov. 10, and healthcare advocates have expressed concern over Barrett’s opinions of it. Barrett condemned Chief Justice John Robert’s support of the ACA back in 2012. That same year, she signed an opposition to the ACA’s requirement that employers include birth control access in health insurance plans.

When the act was challenged again in 2015, Barrett once again suggested her opposition in stating that the dissent had “the better of the legal argument,” per a NWLC fact sheet. If the ACA were to be ruled out, around 20 million Americans or more would be at risk of losing healthcare.
Gun Rights
It takes four votes to grant case review, and conservative justices on the court have expressed interest in returning to the subject of gun rights. Barrett’s confirmation adds an even more conservative edge to an already conservative-dominant court, thus increasing the likelihood of second amendment case hearings.

Referencing constitutional originalism, Barrett said she would have lessened the extent of a federal law forbidding those with felony convictions from owning guns. In the 2019 dissent, she wrote that “History does not support the proposition that felons lose their Second Amendment rights solely because of their status as felons.” She did, however, voice support of the proposition that the state can take away second amendment rights from people deemed dangerous.
LGBTQ+ Rights
The Supreme Court is set to hear Fulton v. Philadelphia on Nov. 4, one of Barrett’s first cases as a justice. In this case, Catholic Social Services (CSS) sued the city of  Philadelphia after the city said CSS could not discriminate against LGBTQ+ couples when placing children in foster care.

At her confirmation hearings, Barrett declined to comment on whether the 2015 SCOTUS ruling that granted same-sex marriage was correct, so her influence on the upcoming case is unclear.
A Few More Points
When the topic of systemic racism came up at Barrett’s confirmation hearings, she did not reveal her view on whether or not it exists. “It would be inappropriate for me to offer an opinion on the matter,” she said. In addition, she failed to disclose her view on climate change, saying that it would be inappropriate “to opine further on any subject of political controversy.”

As abortion rights remain a hot button issue, Barrett was met with an influx of questions on the matter. She deflected most, one of which was whether a state making abortion a capital offense, punishable by the death penalty, would pose a constitutional problem. Overall, Barrett’s conservative stances pose a threat to democratic values.